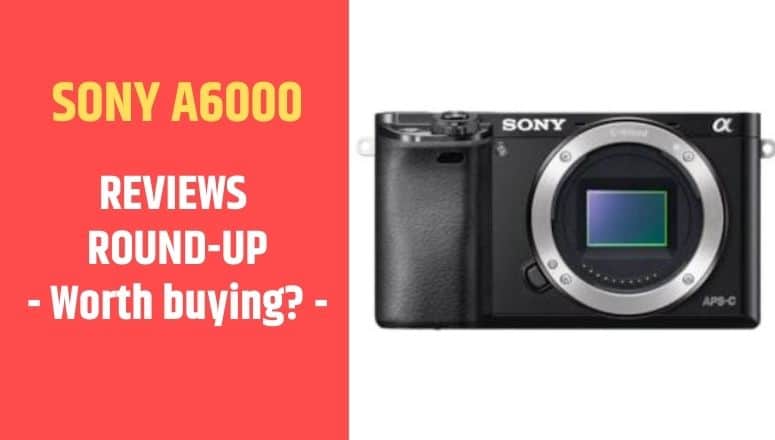 Here’s a roundup of all the Sony A6000 reviews, ratings and impressions from the web. Discover its strengths and weaknesses here!

The camera can snap photos in JPG and RAW format, with an 11 fps burst. It records videos in 1080p at up to 60 fps. All data is saved on a single UHS-II compatible SD card slot. The A600 can be remotely operated in Wi-Fi, and has NFC connectivity. The battery will last between 280 end 325 shots and can be charged via USB. The camera weighs 344g with the battery and SD card included.

So what do the critics think of the Sony A6000?

Overall most reviews say that the Sony A6000 is still a great mirrorless camera, years after its release. The sensor is great and delivers some very good quality images. The camera is tiny and easy to transport. It can also be bought for a very good price as it is an old model. Obviously, the technologies have evolved since 2014, so it is expected to find some quite outdated -but still performing- autofocus, ISO range and connections.

The battery has a very short life, so having a spare one will be necessary for long shooting sessions. The lack of stabilization is damageable though, as is the absence of a 4K video mode. The camera is definitely more oriented towards daytime photography.

For more infos about the positive and negatives sides of the Sony Alpha 6000, check out the selection of reviews below:

Dpreview.com – 80% (Gold Award) – ‘The a6000 brings Sony’s latest interface improvements and enhanced JPEG processing to a well-featured, competitively-priced mid-range camera. Its stand-out features are its comprehensive video controls and continuous autofocus performance unprecedented at this price. The flexible but optically average power zoom make this a highly capable and compact package.’

Digitalcameraworld.com – ★★★★½ – ‘Old as it is, the Sony A6000 shows that many of the most important things we look for in a camera haven’t changed. Its 24-megapixel sensor is as competitive today as it was when this camera was launched. Its 11fps burst mode is rarely bettered, even now, and while Sony has steadily improved the AF system in its A6XXX cameras, the A6000 is already very good – perhaps as good as most of us need. You don’t get 4K video, the design and displays are now looking a bit dated, and the high ISO image quality isn’t quite up there with the best of its rivals today, but otherwise this is still a great, great camera.’

Ephotozine.com – ★★★★½ (Highly Recommended) – ‘The A6000 is offered at an impressive price point, under-cutting a number of the competition, whilst offering high speed shooting. The only area this camera is let down, is in the choice of the 16-50mm OSS kit lens, which we feel does not deliver the full potential of this camera. ‘

Photographyblog.com – ★★★★★ (Essential) – ‘The Sony A6000 is a great mirrorless camera that truly can keep up with all the action.’

Photographylife.com – 4.5/5 (Gold Award) – ‘With its compact and lightweight camera body, comfortable grip, fast and accurate hybrid autofocus system, bright and responsive electronic viewfinder and superb image quality, the A6000 has been my top recommendation for those who wanted to get into photography, wanted to get a secondary camera, or wanted to try out a mirrorless camera.’

Trustedreviews.com – ★★★★½ – ‘The Sony a6000 is an impressive CSC that may lack a particularly standout feature but otherwise offers a very compelling combination of compact form factor, very impressive performance and a reasonably competitive price.’

Techradar.com – ★★★★½ – ‘Aside from the excellent image quality, probably the best thing about the A6000 is the way that all of the buttons, and the function menu, can be customised to suit your needs. It’s a great way to work and means you can dump those settings you never use, and have quick access to the ones you use often.’

6 thoughts on “Sony A6000 reviews roundup: all the scores”