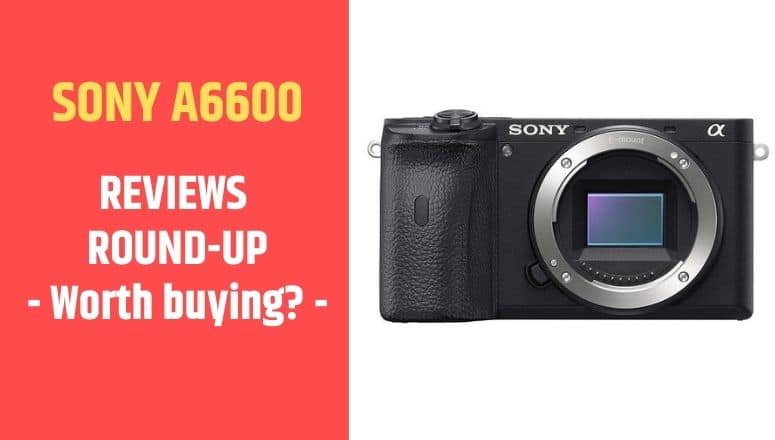 Sony A6600 reviews roundup: Should you buy it?

Here’s a roundup of all the Sony A6600 reviews, ratings and impressions from the web. Discover its strengths and weaknesses here!

The pictures are recorded in RAW and JPG formats, with an 11 fps burst. Videos are shot in 1080 at up to 120 fps cropped, 4K at 30 fps cropped, or 4K at 24 fps uncropped. There is a single UHS-I SD card slot for storage. There is Wi-Fi, Bluetooth and NFC connectivity as well as a microphone input and headphone output The battery can last for up to 800 shots but have been tested for more than 1000 shots in mixed usage. Altogether, the camera body and its battery are weighing 503g.

So what do the critics think of the Sony A6600?

Overall most reviews say that the Sony A6600 is a powerful mirrorless camera with some minor drawbacks. The image quality is great, with a solid dynamic range. The image stabilization as well as the autofocus are doing an amazing job, perfect for handheld and quick snaps. The EVF is sharp and bright. The battery has an amazing capacity. The videos are unfortunately not as great as the photos. There is a visible rolling shutter, and the 4K video is quite limited. The single UHS-I SD card slot is also limiting. Most concerns come from the controls. There are a lot of menus and most settings are hard to reach. The camera seems a bit pricey compared to some comparable models from other companies.

For more infos about the positive and negatives sides of the Sony A6600, check out the selection of reviews below:

Camerajabber.com – ★★★★★ – ‘At times the Sony A6600 is frustrating, a couple of changes to the control arrangement could improve its handling enormously, but it’s capable of delivering excellent-quality images and video. It has an extensive feature set and decisive, accurate focusing in both stills and video shooting.’

Dpreview.com – 83% (Silver Award) – ‘The Sony a6600 has an industry-leading autofocus system, is capable of excellent images and video, comes with very useful in-body image stabilization and has the best battery life of any mirrorless camera on the market at this time. However, its sensor is getting a bit long-in-the-tooth, and competitors have caught up or surpassed it regarding video quality and features, resolution and handling. But for family photography and even some sports and action, it’s easily worth your consideration.’

Digitalcameraworld.com – ★★★★★ – ‘The Sony a6600 looks an excellent camera for video and vlogging, and its stunning AF, in-body image stabilization and large battery make it suitable for demanding stills photography. However, its still image quality is good rather than class-leading, which is a significant shortcoming given the a6600 is up against some terrific and more keenly-priced rival cameras, and while its video performance is broadly good, its marred by pronounced rolling shutter effect and pretty ordinary video specifications by today’s standards.’

Expertreviews.co.uk – ★★★★★ – ‘A super fun, super quality camera with super battery life – but not a camera that wins our unqualified approval’

Pcmag.com – ★★★★★ (Excellent) – ‘Sony brings its class-leading autofocus tech and big Z battery to its a6600 APS-C camera, but we wish there were improvements in other areas too.’

Photographyblog.com – ★★★★★ (Recommended) – ‘Looking further down Sony’s own APS-C range, the A6400 offers the same image/video quality and virtually all of the same features as the A6600 at a notably lower price-point, with the main exceptions of the A6600’s IBIS system, longer battery life and headphone jack.’

Trustedreviews.com – ★★★★★ – ‘The A6600 has plenty of enticing features, but it’s let down by disappointing body design. It’s a good choice for those who shoot a lot of sports and action, but there are plenty of rival models that are also up to that job. It’s also just a little too similar to its predecessor to draw too much enthusiasm for the extra outlay.’

Thephoblographer.com – 3/5 – ‘In many ways, the Sony a6600 feels like a minor improvement. You’ve got a bigger battery, image stabilization (that this series of cameras should have had for years), and the autofocus system of another camera. Beyond that, you have the lack of a joystick, and a genuinely usable touchscreen, which limits the entire way that you can interact with and use the camera. ‘

Techradar.com – ★★★★★ – ‘On paper, the a6600 should be the APS-C camera to beat, with a top-performing sensor and a range of features that will appeal to a broad swath of photographers. However, Sony has resolutely stuck with a form factor that’s not as comfortable as rival cameras, with a convoluted menu system, and options that don’t always work as you’d expect them to.’

Tomsguide.com – ★★★★½ – ‘The Sony Alpha a6600 is expensive, but it delivers impressive quality, performance and a slew of useful features.’