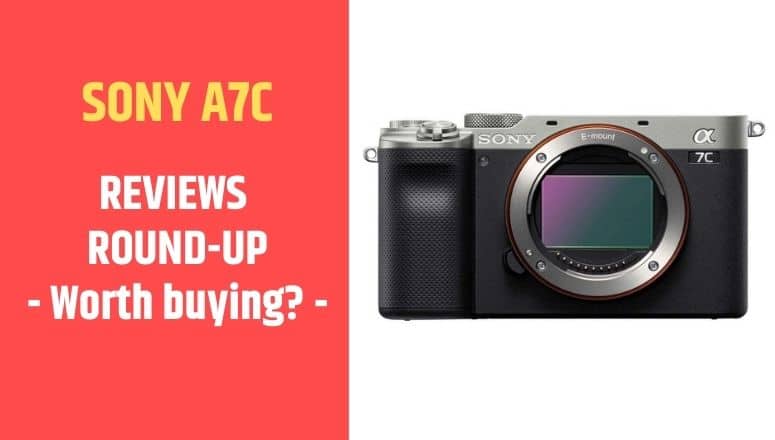 Sony A7C reviews roundup: is Sony A7C worth it?

Here’s a roundup of all the Sony A7C reviews, ratings and impressions from the web. Discover its strengths and weaknesses here!

The camera records photos in RAW and JPG formats, with a 10 fps burst in continuous mode. It shoots videos up to a 4K resolution, at up to 30 fps oversampled in 8-bit S-Log and HLG. The recordings are saved on a single UHS-II SD card slot. There is dual-band Wi-Fi connectivity included, in 2.4GHz and 5GHz. The Z type battery will last up to 740 shots. The camera body weighs 509g with the battery included.

So what do the critics think of the Sony A7C?

Overall most reviews say that the Sony A7C is a small and powerful full-frame mirrorless camera. The image quality, both in photo and video, are excellent. The autofocus system is very powerful and a great update to its predecessor. The in-body stabilization works well and is a great feature for such a tiny camera. The battery is really impressive, part of the best on the market at the time of its release.

There are still some drawbacks, like the absence of built-in flash or the small viewfinder. The menus are overcomplicated at times, and won’t load when the camera is writing to the SD card. The 4K video mode is interesting but lacks premium features one would expect from this price range.

For more infos about the positive and negatives sides of the Sony A7C, check out the selection of reviews below:

Dpreview.com – 86% (Silver Award) – ‘The Sony a7C is gives up very little in the way of features in order to achieve its small size. Its image quality is very good and its AF is excellent, but its small viewfinder takes away from the experience a little. Its video and menus aren’t as polished as its rivals but its size and battery life make for a powerful combination.’

Digitalcameraworld.com – ★★★½ – ‘The Sony A7C’s specifications are unambitious to say the least, particularly in terms of its video capabilities, but its practical performance, from its handy vari-angle screen to its excellent AF system, make it effective enough as a camera. We will leave it to you to decide if its two-tone design is appealing, but for us it does not have the quality ‘feel’ of the other A7 models. Does the Sony range and the full frame mirrorless camera market need this camera, though? It’s not cheap, it’s not pretty and its not even technically very advanced.’

Ephotozine.com – ★★★★★ (Recommended) – ‘Recommended, but choose a compact prime lens to get the best from the camera – For those looking for a compact, full-frame, Sony mirrorless camera, the A7C could be a great choice, particularly if paired with a compact prime lens. However, there are definitely better choices available. We weren’t particularly impressed with the EVF, or the 28-60mm lens, and unless you really want a compact zoom lens, we wouldn’t recommend this lens, as it’s limiting the benefits of the full-frame sensor.’

Pcmag.com – 3.5/5 (Good) – ‘The Sony a7C is a slimmed down, full-frame camera built for travel, but its small size limits its versatility, and some aspects feel a little dated.’

Photographyblog.com – ★★★★★ (Recommended) – ‘The new Sony Alpha 7C certainly solves those key issues, but for us at least, it makes too many concessions to the A6000-series and A7 III models that it’s clearly based upon to be a great camera in its own right, all at a price that puts it out of reach of a lot of its target audience. A technological marvel, then, but one that doesn’t quite hit the mark…’

T3.com – ★★★★★ – ‘Placing full-frame tech inside an APS-C-sized body shows off exactly what Sony is capable of. In terms of image quality and performance, the A7C matches the A7 III, but in terms of usability, it’s a bit of a damp squib. Unless you’re particularly wedded to the idea that your camera needs to be as small as possible, it’s hard to recommend this model over the A7 III.’

1 thought on “Sony A7C reviews roundup: all the scores”