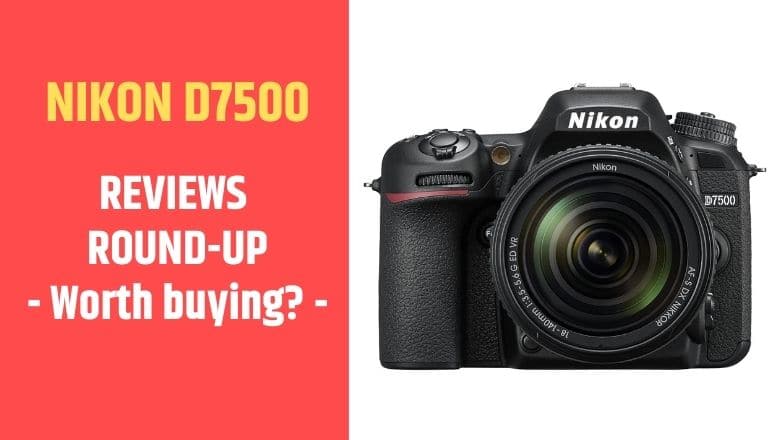 Nikon D7500 reviews roundup: Should you buy it?

Here’s a roundup of all the Nikon D7500 reviews, ratings and impressions from the web. Discover its strengths and weaknesses here!

So what do the critics think of the Nikon D7500?

Overall, most review say that the continuous shooting speed of 8 fps is great for sport and action shooters. Although competitors such as the Nikon D500 and the Canon EOS 7D II offer a faster rate at 10 fps. On the other hand, low-light performance and overall image quality are outstanding.

If you are an adventure photographer looking for landscapes and nature shoots, the Nikon D7500 is a great match. You will enjoy the carbon-fiber body, the deep grip and a weather-sealed body. Plus, the RAW image quality is excellent.
Eventually, the D7500 has some flaws in regards to video shooting. It does offer 4K UHD capture possibility but the 1.5x crop factor might be limiting if you’re a video enthusiast.

For more infos about the positive and negatives sides of the Nikon D7500, check out the selection of reviews below:

Dpreview.com – 86% (Silver Award) – ‘The D7500 is an outstanding stills camera and a refinement of an already excellent DSLR. It brings added speed and buffer depth to the enthusiast level and adds improved subject recognition. More comfortable to hold than its predecessor, the addition of a tilting touchscreen only adds to the camera’s excellent ergonomics. And while 4K video is a nice selling point, the 1.5x crop and crummy video AF dim its appeal for movie makers. But for stills shooters, the D7500 is one beast of a camera.’

Digitalcameraworld.com – ★★★★½ – ‘Nikon’s decision to drop the resolution of its top APS-C DSLRs to 20 megapixels was a surprise to many and this has a slight impact on the D7500’s outright resolution – but its speed, low-light performance and overall image quality are first rate. At first it looked like a bit of routine range-filling on Nikon’s part, but as the market has matured, prices have fallen and rivals have changed… and the D7500 now has few direct competitors.’

Ephotozine.com – ★★★★★ (Editor’s Choice) – ‘The Nikon D7500 offers the best in class noise performance, and a wealth of features, including 4K UHD video recording.’

Pcmag.com – ★★★★½ (Excellent) – ‘The Nikon D7500 SLR inherits many of the features of the flagship D500 and is available for a lot less money, but omits some features found in previous D7000 models.’

Photographyblog.com – ★★★★½ (Highly Recommended) – ‘If you shoot a lot of action, want dual memory card slots, and more AF points, consider saving up a little bit longer and getting the more expensive camera. Otherwise, the D7500 should meet most of your needs. ‘

Photographylife.com – 4.4/5 (SilverAward) – ‘In short, the D7500 gets a lot of things right, despite a few noticeable drawbacks, and the result is a camera with very impressive performance overall.’

Thephoblographer.com – No score – ‘This is a fantastic camera. The only snag I hit was the bluetooth connectivity. ‘

Techradar.com – ★★★★½ (Recommended) – ‘Despite its age, the D7500 remains a strong all-round performer, particularly for its ever-decreasing price. Its pairing of an impressive 20.9MP sensor with the same image processing engine found in the D500 remains a cracking combination, while specs like 8fps burst shooting and 4K video keep it up to speed with many of today’s newer models. Its autofocus isn’t quite as advanced these days, but you’ll struggle to find a better DSLR for the money.’

Tomsguide.com – ★★★★★ (Editor’s Choice) – ‘The Nikon D7500 is an advanced-enthusiast DX-format camera that impresses with its top-notch image quality and blazingly fast performance.’

1 thought on “Nikon D7500 reviews roundup: all the scores”