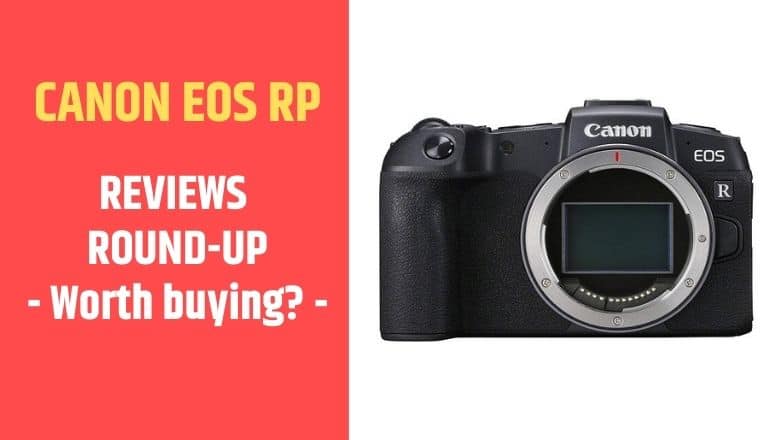 Reviews roundup – Canon EOS RP : Should you buy it?

Here’s a roundup of all the Canon EOS RP reviews, ratings and impressions from the web. Discover its strengths and weaknesses here!

For video mode, the RP is able to shoot in 4K and reaches 25 frames per second. In terms of design, Canon RP is one of the smallest and lightest full-frame cameras with a weight about 440g including memory card and a battery. It’s able to shoot 250 images per charge.

So what do the critics think of the Canon EOS RP?

Overall most reviews say that the Canon EOS RP is the first camera which can be qualified as an “entry-level full frame Camera”. It offers a good JPEG quality image but the RF system lens selection is not huge and you have to buy an adapter ring to access nice selection of lenses.

Raw shooting made more noise than lots of other cameras on the market, especially in shadows. Also, the Canon RP only permit to shoot 5 frames per second and don’t offer mechanical stabilization of the sensor.

For more infos about the positive and negatives sides of the Canon EOS RP, check out the selection of reviews below:

Cameralabs.com – ★★★½ (Recommended) – ‘The RP is ideal for Canon owners wanting to make the switch to full-frame mirrorless without breaking the bank.’

Dpreview.com – 83% (Silver Award) – ‘The Canon EOS RP’s specifications aren’t exactly exciting, but don’t let that fool you – it’s a likable little camera with engaging controls, good build quality and it produces excellent JPEGs. Of course, the Raw files are noisier and aren’t as malleable as some more contemporary full-frame cameras, but for the target audience, that won’t likely be a deal breaker. For those users looking for a friendly way to get into full-frame imaging, the EOS RP is an excellent option.’

Digitalcameraworld.com – ★★★★★ – ‘The Canon EOS RP is small, affordable and versatile. It’s not cutting edge tech, but the cheaper it gets, the more we like it’

Pcmag.com – ★★★★★ (Excellent) – ‘Canon wants to bring full-frame photography to the masses with the affordable EOS RP. It’s a solid camera for the price, but Canon needs to release more low-cost RF-mount lenses to pair with it.’

Trustedreviews.com – ★★★★★ (Recommended) – ‘A strong full-frame upgrade for those with older Canon DSLRs or a collections of EF lenses, but the EOS RP’s older sensor and 4K video limitations mean those starting from scratch should consider an older rival like the Sony A7 II or an APS-C alternative like the Fujifilm X-T3.’

Techradar.com – ★★★★½ (Recommended) – ‘Arguably a much more compelling proposition for those looking to move to full-frame mirrorless shooting than the EOS R, the EOS RP is blessed with a good build, great image quality, sound autofocus performance and many further pleasures. The sheen is only rubbed off a little by a lack of logical lens options and compromised video capabilities, but if you already own EF lenses and have no use for video it might be just what you were hoping Canon would end up releasing.’

1 thought on “Canon EOS RP Reviews Roundup: all the scores”