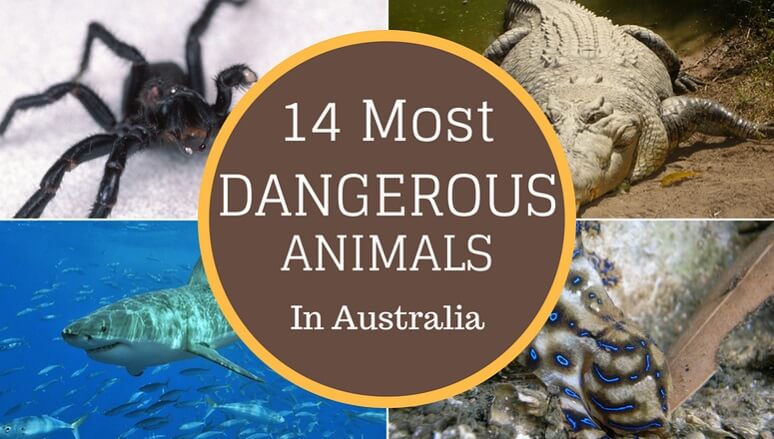 What dangerous animals does Australia have?

Here is a list of the most dangerous animals found in Australia, divided between marine and terrestrial animals. Convenient to know if you are planning your first trip there. Even if some will tell you that there are few deaths, that you are more likely to be hit by lightning … know that accidents with Australian animals happen without necessarily causing death. To avoid problems, and especially, take into account the signs that indicate the presence of dangerous animals!

An octopus about 20 cm in beige color on which appear blue and yellow circles when it gets irritated. And guess what? no antivenin available. Its venom comes from a toxin contained in the salivary glands. The bites are painless, but the result can be seen quickly enough: nausea, partial or complete paralysis, cardiac arrest.

Death usually comes from suffocation due to a lack of oxygen in the brain. Even if the victim does not react anymore it is essential to continue mouth-to-mouth as she may be conscious but unable to breathe. The first treatment is therefore artificial respiration.

A fish resembling a stone or coral, and possessing in its dorsal spines the most deadly venom in the world, which causes shock, paralysis and tissue necrosis. If you are lucky you will suffer only incredibly horrible pain (which mainly affects the joints). The first thing to do is to put hot water on the sting (not less than 45 ° C) to destroy the venom, then seek medical help. The stone fish can stay on the beach outside the water for 24 hours, so be careful where you put your feet. Stonefish antivenom is the second most administered in Australia. It seems that the pain is so horrible that the victims ask to be amputated.

Location: Darwin and North Queensland beaches from October to May

The Irukandji: Almost undetectable because tiny (2.5cm long) and transparent, it can pass through the mesh of the nets installed on the beaches. Their tentacles contain an extremely powerful toxin that can stop your cardiorespiratory function in just minutes. No antivenom exists, just put the vinegar as quickly as possible on the sting and go to the hospital. The symptoms become apparent after 20 to 30 minutes or the pain becomes unbearable.

The box jellyfish: The pain caused by a box jellyfish sting is also horrible. It is about 80 cm long. In general, the tentacle remains stuck to the skin and should not be removed, otherwise it will cause more damage, vinegar must be put on the remaining tentacles in order to kill them and then run into the hospital. If left untreated, the pain can last for weeks and leave a scar. The box jellyfish season runs from October to April in Northern Queensland as the irukandji (there are signs along the beaches).

Most people do not know that the most dangerous animal in the Great Barrier Reef is a marine snail. Its shell is rather pretty and make you want to be picked up. Like the blue-ringed octopus, the cone shells can be found in the rocks but unlike the octopus its bite is felt immediately. If he feels assaulted, the shell cone projects a transparent spear-shaped stinger into his victim and injects him with a deadly venom (which he normally uses to catch fish).

Location: everywhere near the coast

Normally harmless, however, they can give a tail stroke at the end of which is a sharp dart and poison. If you are diving in Australia you will certainly see some. Do not swim too close and leave the field free because if it feels stuck it may attack. Also be careful if you go swimming in shallow water, they can be capped in the sand. The attacks are not lethal if they touch a vital organ, as was the case for Steve-Irwin, the famous ‘crocodile hunter’ who had to tickle a stingray a little too close or swam at the top without seeing it. . Venom is not deadly but the result is similar to lacerations or stabbing (type ‘stingray barb’ in google to see the damage it can do).

Location: Northern Australia, from Broome in Western Australia to Rockhampton in Queensland.

My favorite with the great white shark. Extremely aggressive, it can reach a height of 6 meters (the largest specimen captured is 6.40 meters and was captured in September 2011 in the Philippines). Do not confuse it with the ‘freshwater crocodile’, with a slimmer nose. As the name suggests it can swim at sea, some specimens have even been seen on Fraser Island. They may seem cushy, but its capable of blazing attacks and consider humans as prey. The only thing to do is to avoid their territories as much as possible. Signs usually indicate the presence or absence of crocodiles.

Location: the coasts around the country

I don’t really need to present them, here are the three most dangerous that we can meet in the land of Hugh Jackman:

The Great White Shark, the best known, is found in the cold waters of the south of the country. It is possible to swim in cage with white sharks lurking around.

The tiger shark: Aggressive and responsible for many attacks, he lives near the coast in tropical and temperate waters. He is easily recognizable with his stripes on the back (he is aptly named). My obsession is to see one diving – or so far, far away.

The bullshark: the most dangerous of all, it can attack in a meter of water, and is mainly present in warm water. Very aggressive, he can go up the rivers (he tolerates fresh water, there have even been attacks in the Ganges in India). Some were seen 30km inland during the Queensland floods in January 2011.

Location: all the country

I’m not going to review them all, just know that of the 10 deadliest snakes in the world 8 live in Australia, including Tasmania. Avoid mumuse with and do not go for a walk wearing flip-flops and shorts in tall grass. The best known are Taipan, Brown snake, tiger snake, fierce snake and there are many others with sweet names.

The emblem of Australia, timid and normally harmless (although it can be aggressive on rare occasions as was the case when a 94 years woman was attacked in July 2011), the real danger comes from the fact that they are attracted by the headlights of the vehicles. Hence the famous Australian yellow sign ‘kangaroo crossing’ that can be found everywhere there. If you can avoid driving at night on isolated roads as they can cause serious accidents.

Native to central Australia, you can find it in Queensland, New South Wales, South Australia and the southern Northern Territory to Broome. Very agressive, it’s one of largest species of scorpion native to Australia, measuring up to 10 cm. The male has a long tail, and the female has a short tail. Able to live 10–15 years in captivity, you can find them for sale in pet shops in Australia.

Location: Northern Queensland (to Cairns, including forests and beaches of Cape Tribulation and forests in Western Australia)

This big bird is easily recognizable (a big blue-necked turkey with a helmet). Only one death was recorded, but there were numerous attacks (including on dogs). They have a huge claw worthy of a velociraptor able to open the bide. They can be very aggressive if they have cubs with them or if you have food because they are used to being fed by humans. The tactic to make them flee is to raise your arms up (it seems to work in this video). Otherwise hide behind a tree.

Location: all the country

The Sydney Funnel Web and the red back are the best known (the most dangerous in the world, still what), then come the mouse spider (price of the uglier spider), the white tailed spider and all a bunch of others more or less dangerous. Be careful if you do fruitpicking, think about putting on gloves. A spider that is commonly seen in Australia, the huntsman, is not dangerous for humans (I saw an Australian take one in his hand). In doubt do not mess with spiders.

A wild, beige dog, once domesticated by Aboriginal people and potentially capable of attacking humans, especially children (the only deadly attacks listed are on children, including one at Fraser Island and one at Uluru that inspired the movie ‘a scream in the night’). In April 2011, a little girl whose parents had their backs turned a minute was bitten in the leg by two dingoes. Despite the prohibition signs tourists continue to feed them and because of this they adapt to the man they perceive as a source of food. You risk a fine of $ 4000 if you leave food lying on Fraser Island where there are about 200 dingo who are considered purebred, those living on the mainland are often crossed with other wild dogs.

A marsupial native of Australia, this carnivore who attacks his prey (usually backpackers) by hiding in the trees drops on them at their approach by inflicting formidable bites in their throats. It looks like a koala but do not be fooled, it is vicious. It is said that to avoid being attacked you must put vegemite behind yours ears.