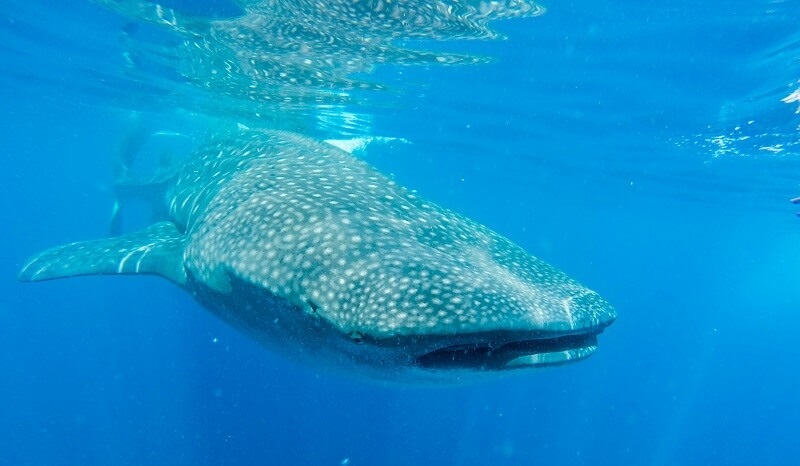 Swimming with whale sharks in Ningaloo Reef, Australia 🇦🇺: Here’s everything you need to know before you go!

What is a whale shark? Generally between 4 and 14 metres in size, whale sharks are the largest fish in the world. They may be part of the shark family, but they are totally harmless, so don’t panic once in the water! They only feed on plankton and krill, like whales (they have no teeth).

It’s possible to see them in many places in the world, but in Ningaloo Reef you’ll have a good chance to spot some of these aquatic giants. Ningaloo Reeef is the equivalent of the Great Barrier Reef, but it’s located on the West coast of Australia, not far from the small town of Exmouth which is a good base to explore the region. It’s simply the best place in Australia to see whale sharks.

In Ningaloo Reef it’s also possible to swim with manta rays, which is the largest ray species in the world, and can reach a wingspan of up to 7 metres. Like the whale shark, it’s harmless and feeds on plankton.

Book your trip to swim with whale sharks on Getyourguide

How to get to Exmouth?

To see these magnificent creatures you will have to go to the small town of Exmouth, located 1270 km north of Perth. It’s located near the Ningaloo Reef Marine Park, which runs from Coral Bay to Exmouth.

Airplane ✈️: Skywest Airlines offers several daily flights to Exmouth, with a minimum fare of $150 for a one-way flight from Perth to Exmouth, for example. Qantas makes three flights a week to Exmouth.

Bus 🚌: The journey takes 13 hours and Greyhound offers one-way tickets from Perth > Exmouth which depart in the morning around 7:00 am to 8:00 am and you arrive the next afternoon around 3:00 pm.

Integritycoachlines also offers the same service, the price is $207 for a one-way ticket from Perth to Exmouth.

Be careful, these buses do not leave every day of the week, check their respective websites.

Car 🚗: It takes 15 hours to drive if you come directly from Perth but there are several places to see on the way like Monkey Mia, where you can see dolphins, Coral Bay, where you can snorkel among the corals….

Continue on the North West Coastal Highway and turn left on Minilya Exmouth Road. From there Exmouth is 200 km straight ahead.

You can also try to find a lift in Perth to share the gas costs with other backpackers who are going in the same direction.

Where to sleep and eat in Exmouth?

Unless you have your own campervan, if you travel solo the cheapest option will be to go to one of Exmouth’s hostel backpackers, or to a caravan park where you can rent a room in a bungalow.

Book your hotel in Exmouth on Booking.com.

The cheapest way to eat is to go shopping at the Exmouth supermarket and cook in your hostel backpacker or at the campsite. There are also a few coffee shops, pubs and restaurants in Exmouth.

How much does it cost?

I have to say it’s quite an expensive activity, but if you have the budget it’s well worth it.

If you have not booked your tour from Perth or elsewhere, you will see several agencies that offer tours to see whale sharks and manta rays when you arrive in Exmouth (they are easy to spot).

You can also book your tour directly on Getyourguide.

To go and see whale sharks, it will cost you around $300 depending on the agencies. To see the manta rays, count $170 minimum. Prices are similar from one agency to another and you don’t risk saving big money by snooping around a little for the cheapest agency.

If you go to Exmouth just to see these creatures, know that it’s possible to swim with whale sharks in other countries for MUCH less expensive: Philippines, Mozambique, Mexico… if you’re on a round the world trip, maybe it’s better to do it in one of these countries because in Australia, if you count the price of food, accommodation and transport it becomes very expensive. But if you happen to travel on the West coast of Australia and want to see these creatures, then go for it! It’s a once in a lifetime experience.

Last option: you can always try to become friends with local Australians so that they can take you to see the sharks (but I don’t know if it’s feasible since it’s a marine park, it’s just an idea…). 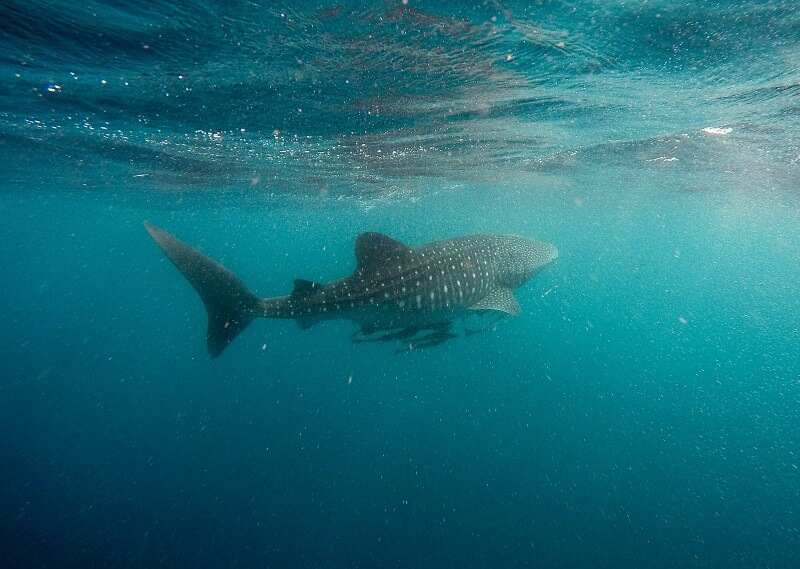 What is the best time to swim with whale sharks in Australia?

The best time to see whale sharks in Australia is from mid-April to July, although this can vary from year to year. In summer (November to June) the water temperature is 24 to 28°c. In winter (July to November) it goes from 20 to 30°c.

Even if you will have a good chance of seeing whale sharks, it’s better to have a few days’ margin in order to go there on a day when the weather will be the best, otherwise the visibility may be bad (just like the day I went to see the manta rays, otherwise for whale sharks the visibility was excellent – but that was my experience).

Swimming with whale sharks and manta rays: my own experience

Your tour picks you up at your hotel or campsite in the early morning (or you go directly to their agency), then they take you out on a boat.

Then you will have half an hour to swim near the corals and see if you are comfortable in the water. You may be lucky enough to see whales, dolphins, turtles, sharks or dugongs if you are lucky. Trust me, Ningaloo reef is a crazy place for snorkellers and scuba divers, especially if you like big creatures.

Then you get back on board and a small plane will tell your boat where the whalesharks are. At this time it’s necessary to put on fins, mask, snorkels and dive into the water.

The staff will ask you to stay on either side of the animal (manta ray or whale shark) and not dive so as not to frighten it. Normally it’s no more than four or five people in the water at the same time, so as long as there are sharks or rays next to them you’ll take turns swimming for ten minutes and then go up, another team goes to the water and so on.

On the other hand, although they may be peaceful and harmless animals, they are far from being slow! I hope you are in good health because you will have to swim fast to follow them. Don’t get too close because a whale shark tail kick can do damage.

You will be fascinated when you’ll see the size of whale sharks and manta rays. Honestly, I didn’t expect a manta ray could be that big. I had also done a scuba dive to see some, I think I saw one quickly but I was the only one in the group to see it… quite frustrating. Otherwise, I saw sharks (not whale sharks eh) but I avoided getting too close or I would have pissed in my diving suit.

When you swim with whale sharks, one of them may suddenly turn around and you will have a huge mouth about a metre wide coming at you!

In short, it was one of the craziest experiences of my trip to Australia. 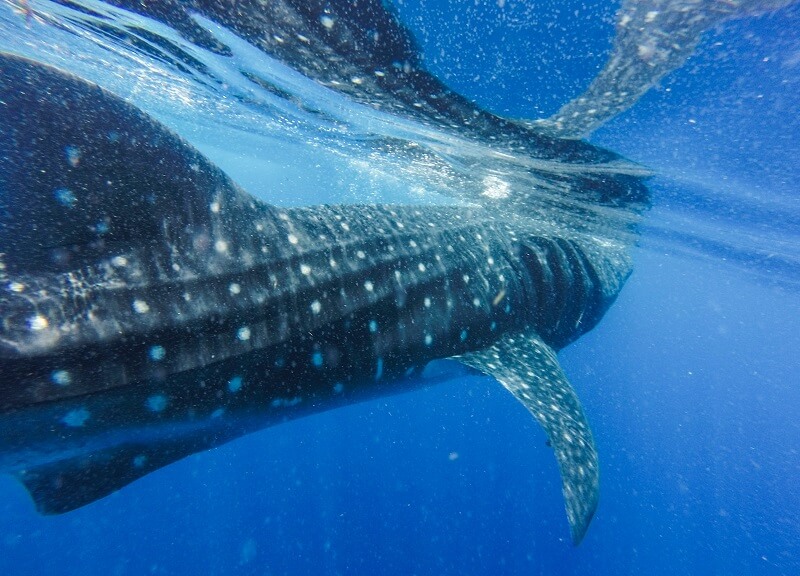 More things to do and see in Exmouth

Exmouth is a great place for Scuba Diving: the navy pier is in the top 10 best diving spots in the world, but be careful as it’s only accessible on certain days of the week and only with the Ningaloodreaming company.

In Exmouth, it’s also possible to do so:

If you have already swam with whale sharks in Ningaloo Reef (or elsewhere in the world), please share your experience in the comments!

Book your trip to swim with whale sharks on Getyourguide

1 thought on “Swimming with Whale sharks in Australia: see the biggest fish in the world!”