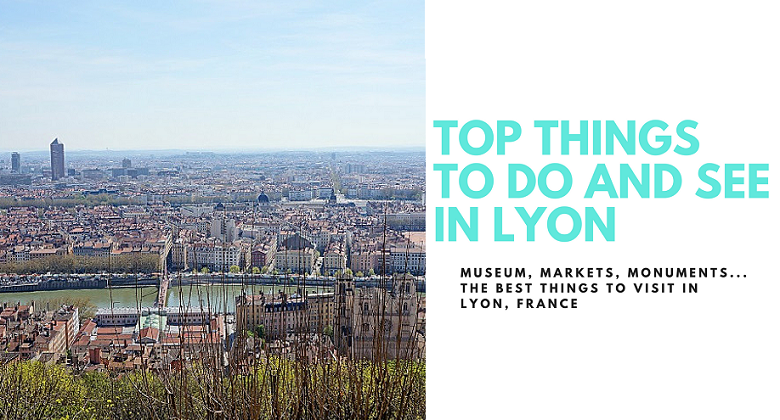 WHAT TO DO IN LYON ?

Accessible in two hours of TGV from Paris, Lyon is located at the confluence of the Rhône and the Saône rivers, and this is surely what gives it a ‘little Paris’ atmosphere but cleaner, calmer, cheaper and without the hordes of tourists you can encounter iun the french capital.

Although it is the second biggest metropolitan area in France, most places of interest can be reached on foot easily because they are concentrated on and around the peninsula, the historic heart of Lyon. You can reach each site by crossing the pretty cobbled streets and the famous traboules. A detour via the district of Croix Rousse or Fourvière is necessary to see great views of Lyon and let you realize the geographical location of the city.

Some tips: If you want to save time or just visit the city, Lyon is very well connected by tram or metro (single ticket: € 1.80 for an hour or € 3 for two hours). However, one inconvenient is the tram that goes to the airport Saint-Exupery: far too expensive at the time I’m writing this post! (2017) If you come to Lyon by TGV, try to arrive directly at the TGV station Lyon Perrache which is the best located, and stay in a hotel in the surroundings.

In short, Lyon is a very beautiful city, pleasant and easy to visit, and deserves to spend a weekend there to discover its rich history, architecture and good cuisine.

Before you go, don’t forget to book your hotel room on Booking.com

Here is the top 15 things you must see and do in Lyon:

1. WALKING ALONG THE RIVES DE SAÔNE

The course that runs along the banks of the Saône has been recently renovated and is a great place for walking or cycling, or for a picnic after exploring the Old Lyon neighborhood. From there we have an interesting view of the city. There are also several pedestrian footbridges that are fun to pass from one bank to the other. The banks of the left bank of the Rhone are also nice to walk. As imposing as it is majestic, it was built at the top of Fourviere hill and is easy to spot with the metal tower that looks like a nearby Eiffel Tower. Once up, the panorama of Lyon is magnificent. Do not hesitate to go inside the Basilica because the interior is well worth a look (much more impressive to see than the Cathedral of Saint John!). The ideal is to reach Fourvière by the funicular and then go down again by foot through the beautiful gardens. A beautiful paved pedestrian street in the center of old Lyon, very popular because it allows to admire the Renaissance architecture as well as several traboules and very beautiful courses. There are also typical restaurants and pubs. 4. EATING IN A BOUCHON LYONNAIS

‘Bouchon‘ is the name given to the typical bistros where you can taste Lyon specialties (grattons, Lyon salad, pike dumplings and Saint-Marcellin cheese …), often accompanied by a good glass of Beaujolais and served on a plaid tablecloth. The establishments labeled ‘bouchon lyonnais‘ are those that maintain the culinary tradition of Lyon and serve authentic products. This is a little known fact but Lyon is the gastronomic capital of France! There are several squares to see in Lyon, if you do not find them at random during your urban exploration, here are the ones that you should not miss: the Place des Terreaux, where we find the Bartholdi fountain of 360 tons (see photo), The Place des Jacobins, the vast Place Bellecour (the third largest in France) and the Place des Célestins, whose nearby theater, with the same name, has 200 years of existence. 6. THE CATHEDRAL OF SAINT JOHN

A cathedral located in the Saint-Jean district, impossible to miss, with a beautiful façade and which houses a huge astronomical clock (unfortunately vandalized in 2013). Lyon has origins dating back to the time of the Roman Empire, and there are two sites to see Roman ruins: the amphitheater of the Three Gauls located in the district of Croix-Rousse, and the two Gallo-Roman theaters of Fourvière, which are much more interesting to see and because it is nearby the Museum of Gallo-Roman Civilization. Surprising at first sight, the murals of Lyon give a living air to the buildings. Not to be missed: the fresco of the Lyonnais on the banks of the Saône, and the wall of the canuts located in the district of Croix-Rousse. Perched at an altitude of 250 meters, this affluent area of ​​Lyon offers a splendid view of a part of the city. There is a whole village built on both a plateau and on a hillside, accessible by metro or by many steps for the most courageous. Go by subway, admire the view at the top, and go down on foot. With its 105 hectares it is one of the largest urban parks in France. There is a free zoo where you can see zebras, giraffes and other African animals, as well as a botanical garden with beautiful greenhouses. A very relaxing place if you are looking for some quiet time.

The traboules (from the Latin word meaning ‘to cross’) are passages through courtyards of buildings that make it easier to move from street to street. There are about 500 of them, and most of them are hidden in the Old Lyon. They played an important role during the revolt of the canuts and for the resistance under the German occupation. One of the most famous traboules is the Cour des Voraces and its six-storey staircases. Do not miss the pink tower (photo). A covered market with many shops, bars and restaurants. The prices are a little high but you can admire superb stalls of regional products and taste specialties of Lyon (sausages, Saint-Marcellin …). In short, a place to visit for its special atmosphere and if you like good food. The halls are closed on Mondays.

This museum, located in the Saint-Jean district, is a three-in-one: a magnificent building to be visited typical of Renaissance architecture, and houses the Lyon History Museum and the World Puppet Museum. 14 – THE MINIATURE AND CINEMA MUSEUM

A must-see in Lyon for lovers of cinema: this museum in the heart of the Old Lyon, located in the beautiful lawyers’ house with its beautiful courtyard (see photo) and presents miniatures of everyday life but also objects used for the special effects of films such as Hellboy or the Alien series. 15. THE FESTIVAL OF LIGHTS

This event has been held annually since 1852 around the 8 December and for four days, to inaugurate the statue of the Blessed Virgin on the bell tower of the former chapel of Fourvière. This celebration attracts millions of visitors each year (4 million in 2012!) who come to see the luminous works of art, video mapping on monuments and shows in the streets.

If you want to do some shopping, go to the La Part-Dieu shopping center. It is one of the largest shopping centers in Europe and offers shops on six levels. Try to go there in the morning during the week and avoid Saturday because it attracts a lot of people. If you do not want to go there you can also shop at the confluence shopping center, just south of the peninsula.

Powered by GetYourGuide. Become a partner.