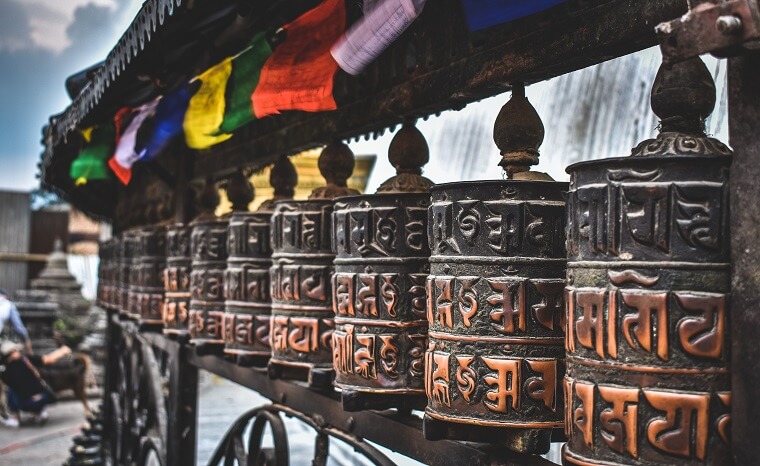 WHAT TO DO IN KATHMANDU (NEPAL 🇳🇵)?

Noisy, polluted, dusty… The first impression of Kathmandu can put off many travellers. However, Nepal’s capital has several interesting places to visit. And even if the traces of the 2015 earthquake are still visible and Durbar Square is no longer what it used to be, this should not be a reason to stop you from visiting Kathmandu: near the Nepalese capital, you can discover ancient royal cities that have fabulous monuments (Patan and Bhaktapur), incredible Buddhist temples, the “Nepalese Varanasi” (Pashupatinath)…

Kathmandu is also the starting point to organize your trip to Nepal, but also a good place to recover from the fatigue of a strenuous trek: there are very good cafés, pastries, bars and restaurants…

Some advice before going to Kathmandu: book a comfortable hotel (it can get cold!), take advantage of tricycles and taxis to get around (walking is not very pleasant in Kathmandu) and finally, take anti-pollution masks with you, especially if you are travelling with children.

Don’t forget to book your first night in Kathmandu NOW on Booking.com

Here are 10 best things to do and see during a trip to Kathmandu:

Located on a hill west of Kathmandu, it is also known as the ‘Monkey Temple’ in reference to the many monkeys that reside there. Keep your distance because they do not hesitate to fly and some would be carriers of rabies (as everywhere in Asia). In the centre of the temple is Swayambhu’s stupa, painted with huge eyes. The place offers a 360° view of the surroundings and allows you to get away from the chaos of the city. As tradition has it, you have to go around the stupa in a clockwise direction. Admission is charged (200 rupees). 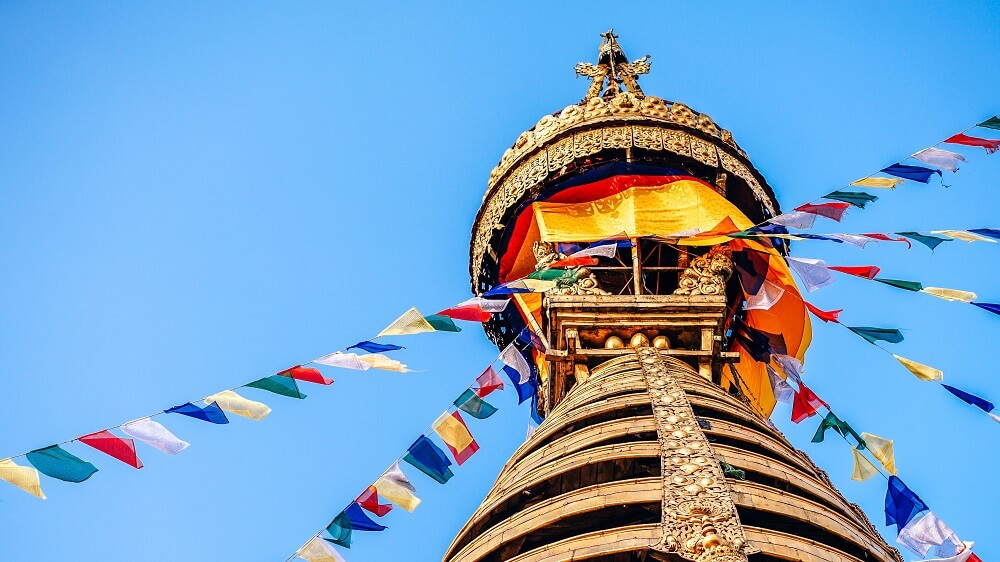 The second most important temple in the Kathmandu Valley with Swayambunath, the Bodnath stupa is one of the largest in the world. Fortunately, it suffered little damage during the 2015 earthquake. Each floor of the stupa represents one of the five elements: earth, water, fire, air and sphere. Bodnath is the most sacred temple for Tibetan Buddhists outside Tibet. There are many prayer flags to be seen. Admission is charged (200 rupees). 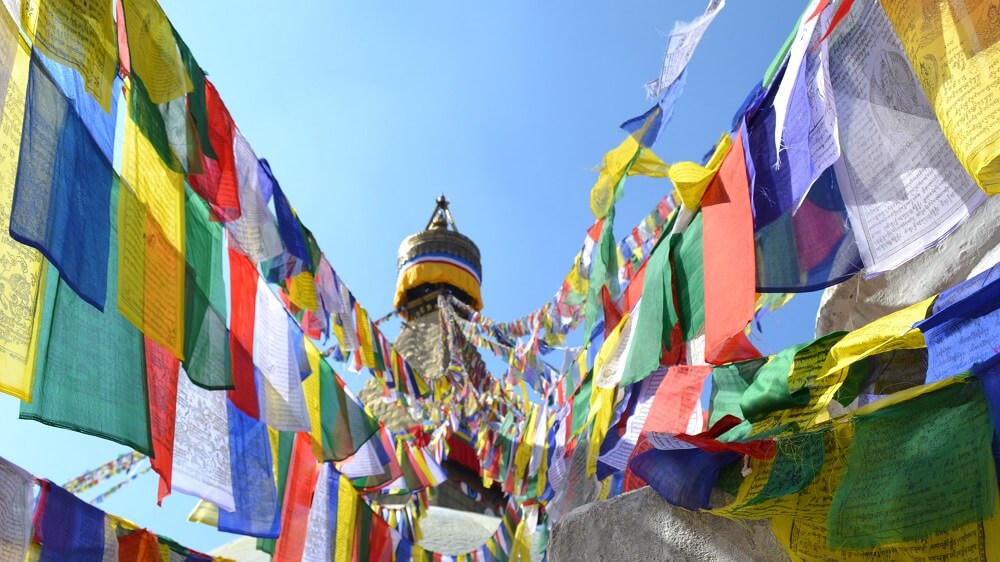 A Tibetan Buddhist monastery located about 45 minutes walk from the Bodnath stupa and away from the boiling Kathmandu. It welcomes visitors of all nationalities who can stay there for about ten days for a spiritual retreat, meditation or to discover Buddhism (reservation on the monastery’s website), or you can simply visit it after going to the stupa of Bodnath to enjoy the calm of its gardens and the view over the valley. There is also a café and a small bookshop. 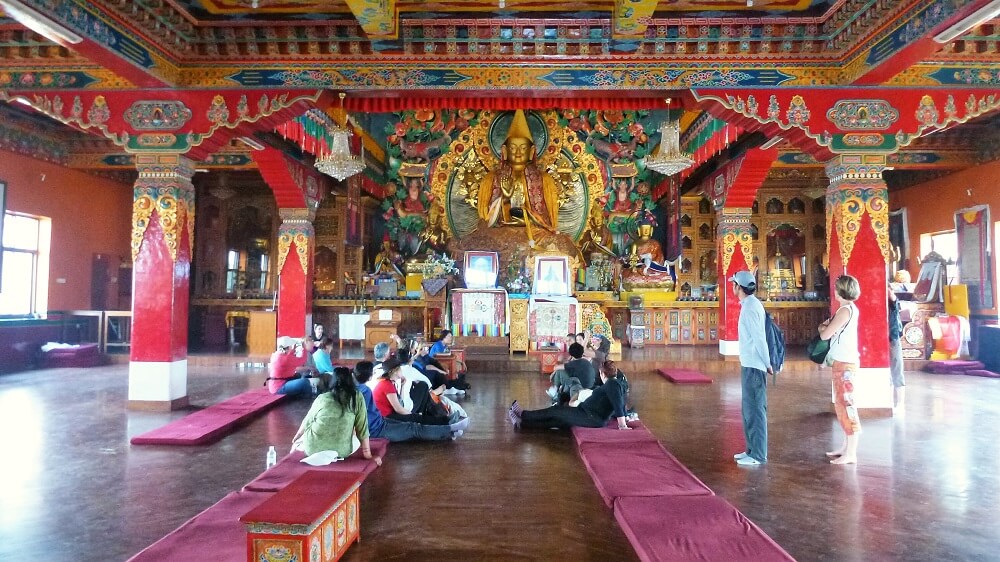 Thamel is the backpacker’s district of Kathmandu, it gathers a set of streets where there are many bars and restaurants for tourists (including the famous pizzeria fire & ice, often full of people). This is an ideal place to organize your trip to Nepal because there are also many shops that sell or rent trekking equipment (often counterfeit) as well as souvenir shops, second-hand books and small supermarkets. The streets of Thamel are generally noisy and it is very tiring to drive through them because of motorcycles, other tourists and dust… in short it is definitely not a place where you have to stay too long, but there are a few hotels in the adjacent alleys that are quite far from the bustle of the main streets. 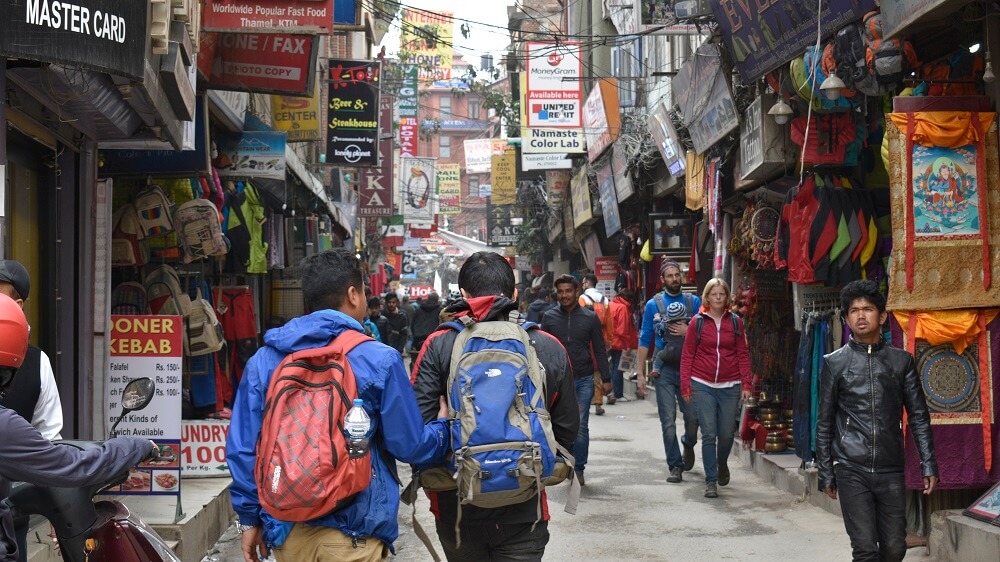 The most important Hindu temple in Nepal, built in 1696 on the orders of King Bhupendra Malla. Non-Hindus cannot enter the temple but can be admired from the outside as well as from other surrounding buildings. The temple is located on the banks of the Bagmati River and it is here that most of Kathmandu’s cremations take place, which can be observed from afar. It’s a bit like the Nepalese equivalent of Varanasi in India… Admission is charged. 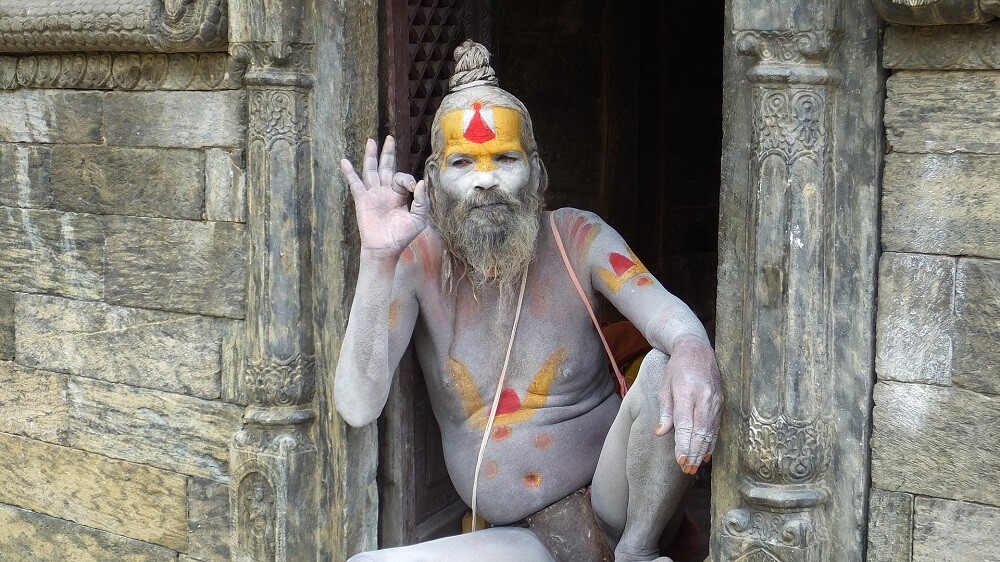 6 – The garden of dreams

The Garden of Dreams, restored after the 2015 earthquake, is a 1920s garden located not far from Thamel and the Royal Palace. Despite its small size, the place is pleasant to visit to get away from the chaos of Kathmandu for a moment, there is also a restaurant. Admission is charged (200 rupees).

Located opposite the former royal palace, Durbar Square is a large square in the heart of the old city dotted with old medieval temples and monuments. Many were destroyed by the 2015 earthquake and only bricks remain in the square, making the area quite depressing to see. Not as beautiful as Patan or Bakthapur in my opinion, but the place remains interesting to visit, preferably with a guide who will explain the meaning of all the monuments. Don’t miss a visit to the building where the Kumari (a young girl considered as a’living goddess’) lives. Durbar Square is not closed to the public but you cannot move freely, there is an entrance fee of 1000 rupees to pay at several checkpoints, even if you are just crossing. 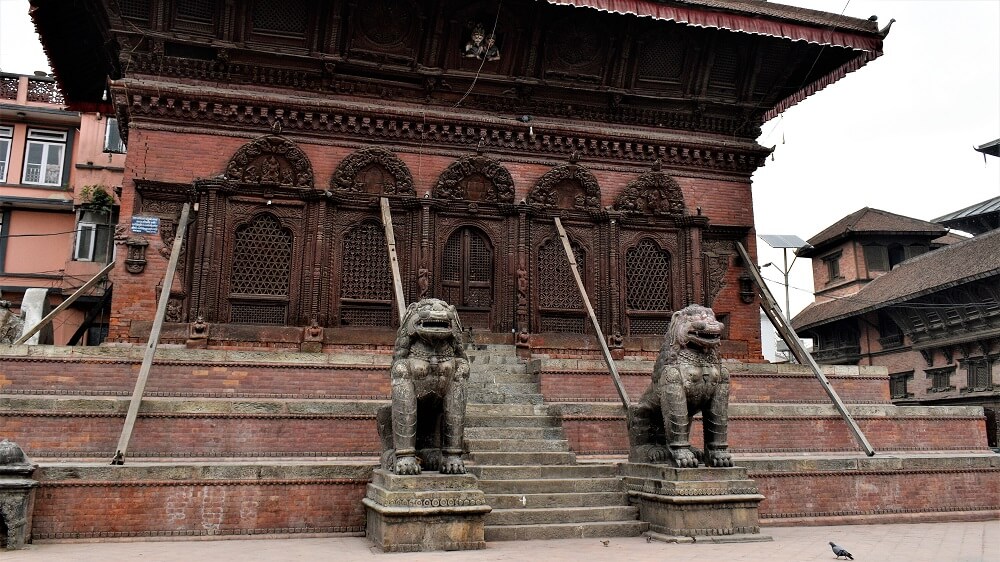 Located half an hour by taxi south of Thamel (or an hour and a half by foot for the bravest), the ancient royal city of Patan is an absolutely must-see place to visit if you come to Nepal. To get there, you have to cross the Bagmati River, which marks the border with Kathmandu. The atmosphere in Patan is much quieter than the capital and the monuments have withstood better than those in Kathmandu. Like Durbar Square in Kathmandu, there is an entrance fee of 1000 rupees which gives access to the superb royal palace and museum. Allow half a day to visit Patan and the small temples located in the streets around the palace. 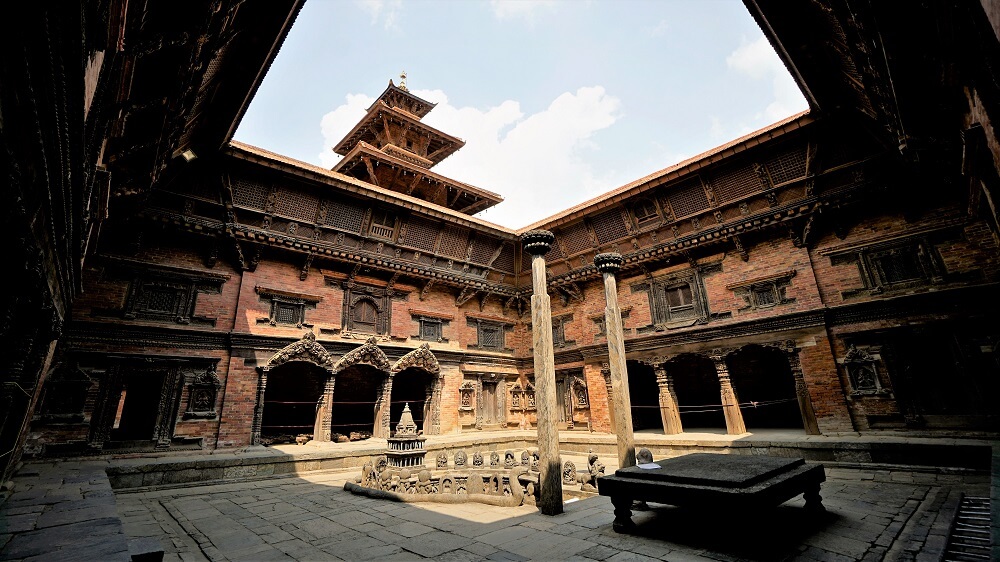 The third royal city after Kathmandu and Patan, Bhaktapur is also the most beautiful even if many of its monuments were damaged by the earthquake. To get there you have to take a taxi or a bus (1 hour drive – 13km east of Kathmandu). There is an entrance fee of 1500 rupees (please bring passport photos). The ideal is to stay several days to quietly explore the cobbled streets and especially enjoy the calm of the area, because cars are prohibited. The most impressive building to see is the Nyatapola temple (see photo), built in 1702. 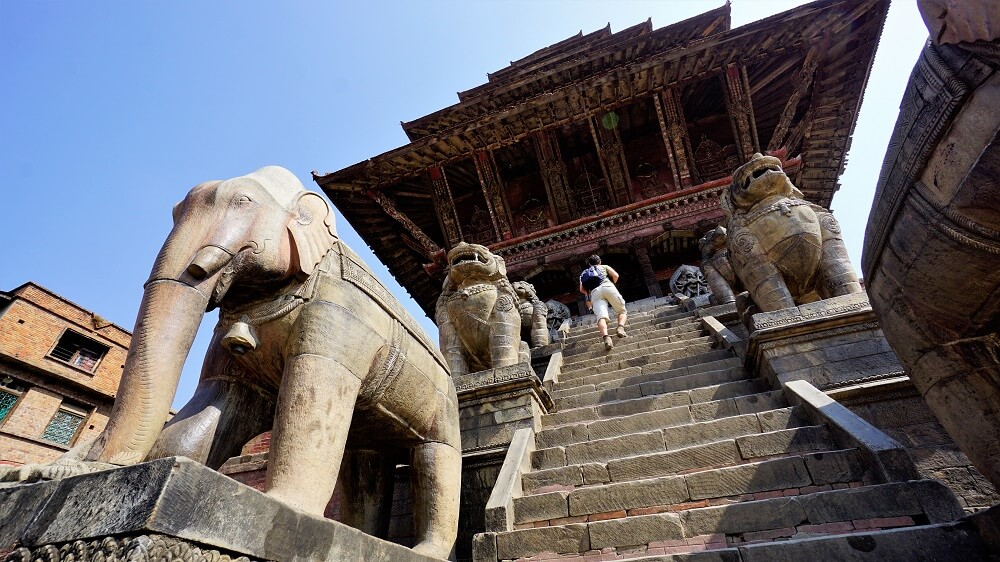 A superb temple, quite different from the others because it houses both Hindu and Buddhist representations. There are many small stupas and statues… It is hidden in a courtyard a little set back from the main streets. You will find the exact address on the Google Map at the bottom of the article. 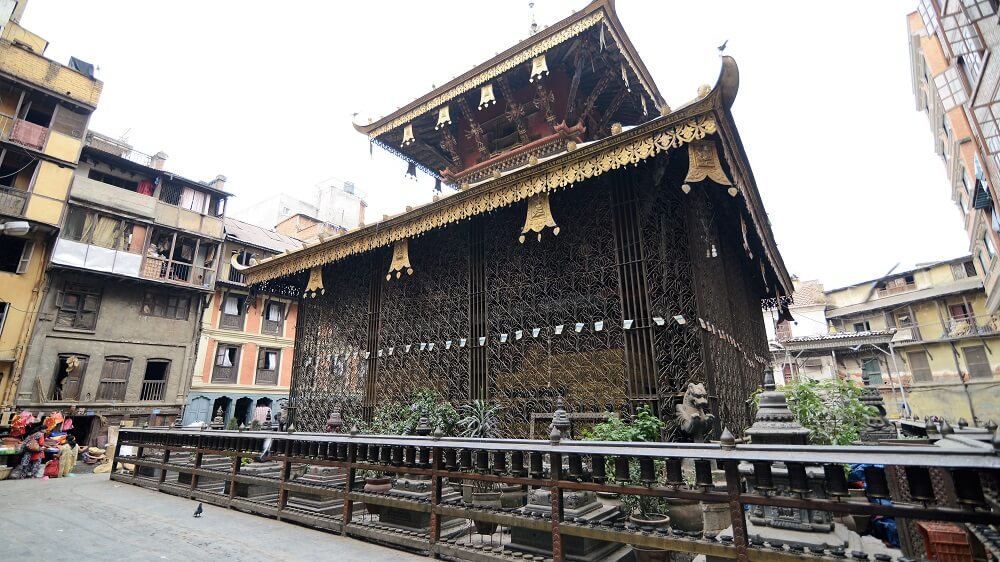 MORE THINGS TO SEE AND DO IN OR NEAR KATHMANDU

– Go to Nagarkot village: located an hour and a half by road from Kathmandu and at an altitude of 2000 metres, you can have a chance to see Mount Everest in the distance (usually in the morning at sunrise, and the sky must be clear).

– Alternatively, from Kathmandu it’s possible to fly over the Himalayas and contemplate the summit of the world: there are several airlines that organize flights of about an hour, including Buddhaair and Yetiairlines. The view is splendid but it is apparently difficult to take beautiful pictures from the windows.

TOP THINGS TO SEE IN KATHMANDU ON GOOGLE MAP 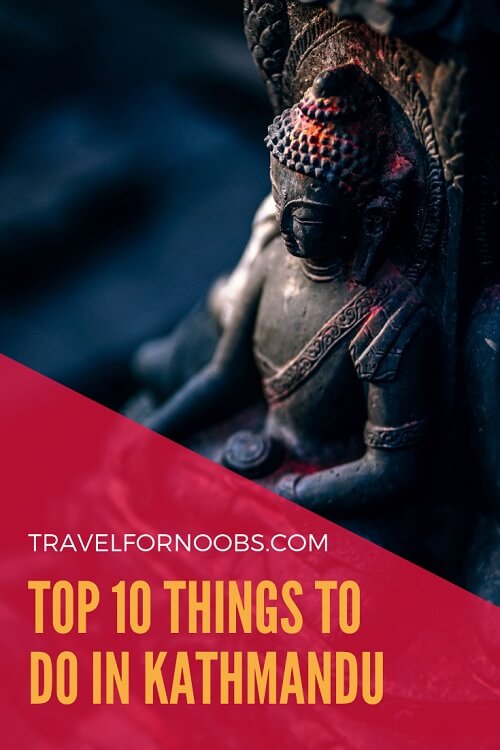