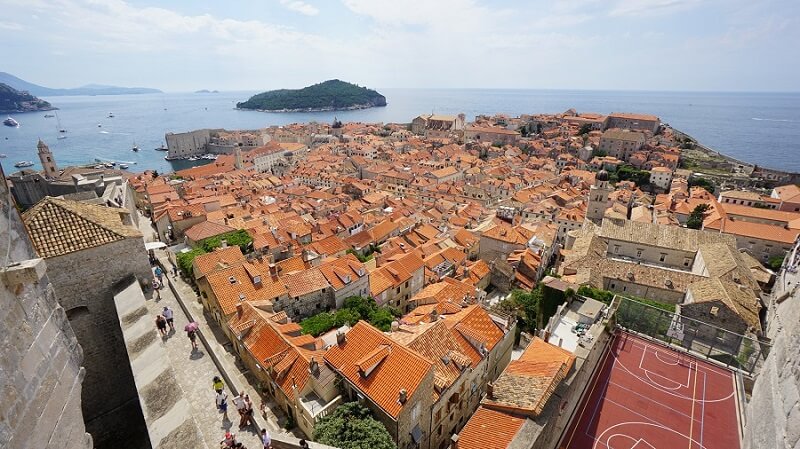 WHAT TO DO IN DUBROVNIK (CROATIA 🇭🇷)?

Dubrovnik, known as the “Pearl of the Adriatic“, is one of the most beautiful and historic cities in Europe. It has been classified as a World Heritage Site since 1979 for its historical importance and its wealth of monuments. It was almost completely destroyed by an earthquake in 1667, then made headlines in the early 1990s when it was sieged by the Yugoslav army, during which thousands of shells fell on the city.

Since the end of the war and thanks to a major restoration work, tourists are now returning. Whether it’s to spend a weekend or several days there, the city is full of monuments to see and there is a lot to do in the surrounding area, especially if you include a visit to the neighbouring countries of Bosnia and Montenegro.

Before visiting Dubrovnik, remember to go to the tourist office to buy the Dubrovnik Card: it allows you to visit several museums and monuments among a selection of several places at an attractive price. The card is valid for 24 hours, three days or a week, and includes visits to several museums, free public transport, and entry to the city walls.

Don’t forget to book your first night in Dubrovnik NOW on Booking.com

Here are 14 best things to do and see during a trip to Dubrovnik:

The impressive Pile Gate is usually the main entry point when you visit Dubrovnik for the first time. It is surmounted by a small niche that contains a statue of Saint Blaise, the saint patron of the city. Also not to be missed: the Ploce Gate (photo), located at the other end of the city. 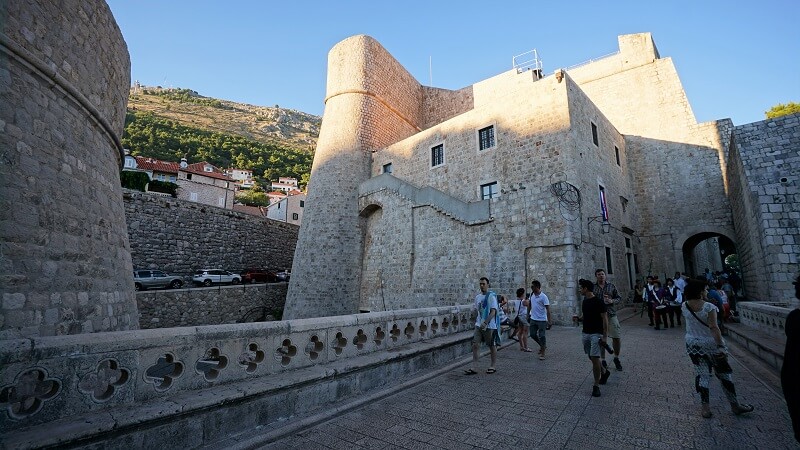 Dubrovnik is surrounded by 25-metre high ramparts that offer a magnificent view of the city and its surroundings from the round path, which runs around the city for about 2 km. The entrance is on the left when you arrive through the Pile Gate (the one next to the large fountain). Avoid visiting between noon and 3pm as the sun is strong. There are some cafés along the ramparts but with few places available due to the number of tourists. 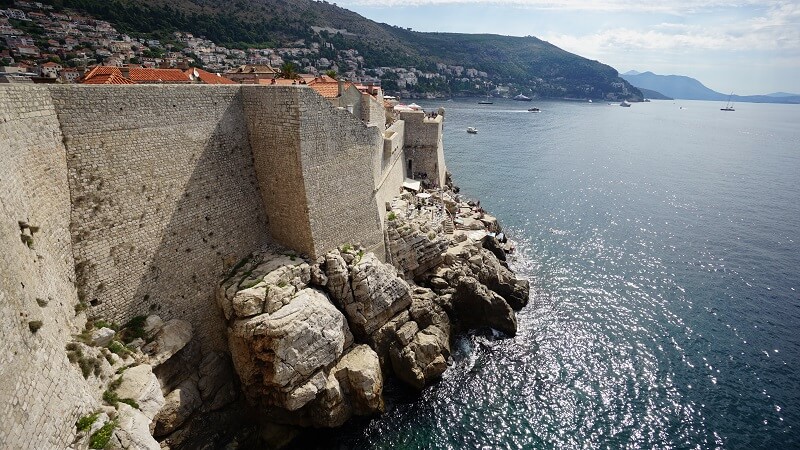 Dubrovnik’s most famous monument, it is located in the small square just after passing through the Pile Gate. It is supplied by a spring located 12 km away and was built between 1438 and 1444. It’s smaller than the original, which was damaged by the 1667 earthquake.  Just in front of the fountain is the Saint-Saviour church. 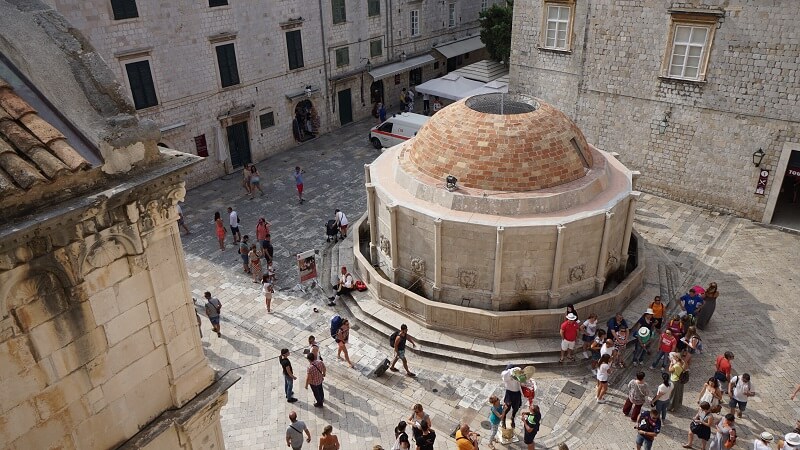 Located just next to the Saint-Saviour church, it was built in 1317 and partly destroyed by the 1667 earthquake. You can see a very beautiful cloister (see photo). Its pharmacy, in operation since 1317, is said to be one of the oldest in Europe. You can still see old mortars, pots and stills used by the monks to make medicines. 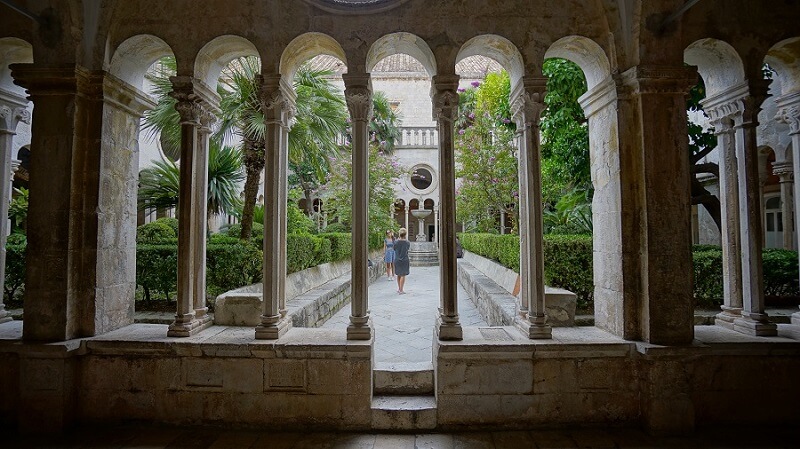 The main street of the city, it’s also called “Placa” by the Croats. 292 metres long, it goes from the Pile Gate to the Loggia Square. The street is lined with cafés, ice-cream parlours and souvenir shops. Try to come very early in the morning or in the evening to walk around because it’s often full of people (the picture here was taken from the city remparts). 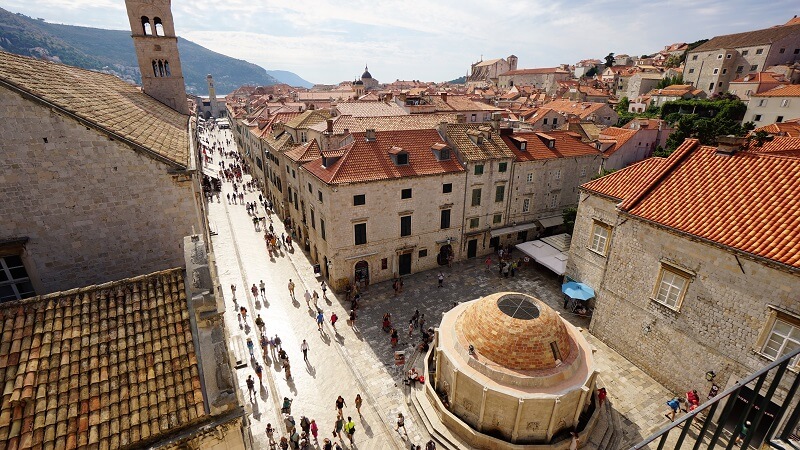 A very beautiful esplanade where there are many religious buildings. Located at the very end of the Stradun, the Loggia Square is dominated by the church of Saint-Blaise, built in 1714, which houses an effigy of the protector of Dubrovnik. There is also the rector’s superb palace and the Sponza palace, with the small Onofrio fountain in between. 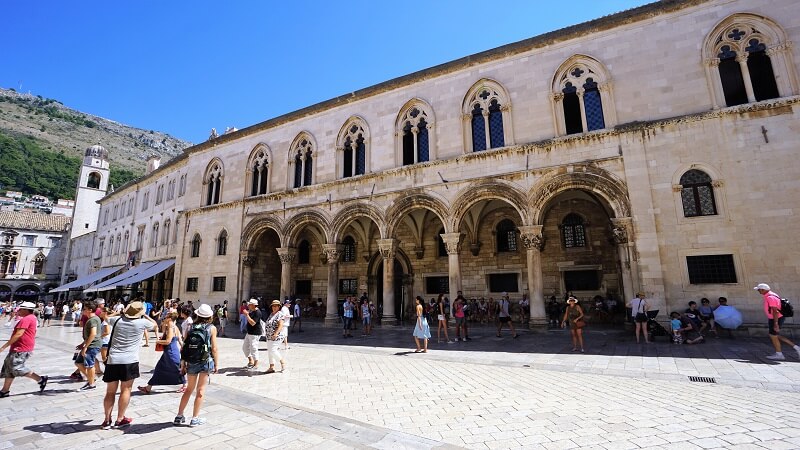 Located to the east of the city, it was built in the 15th century. With its large arcades, it’s a nice place to rest after a long walk in the old town. There are fishing or tour boats that shuttle to Lokrum Island. 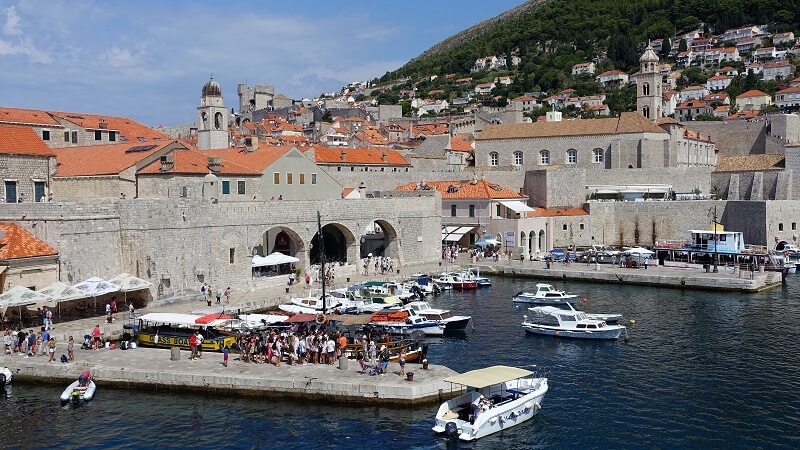 A two-storey exhibition gallery dedicated to photojournalism and war photography. The permanent exhibition dedicated to the wars in Yugoslavia and the Dubrovnik headquarters is located on the upper floor, the ground floor houses temporary exhibitions that cover different conflicts around the world. The room is only open between April and October.

9. THE CATHEDRAL OF THE ASUMPTION

Located near the rector’s palace, its green dome is easily visible from afar when walking on the ramparts. You can see the treasure room, with many relics and paintings. It was built after the earthquake, between 1672 and 1713. The interior is very sober compared to the beauty of its exterior architecture with its dome and statues. 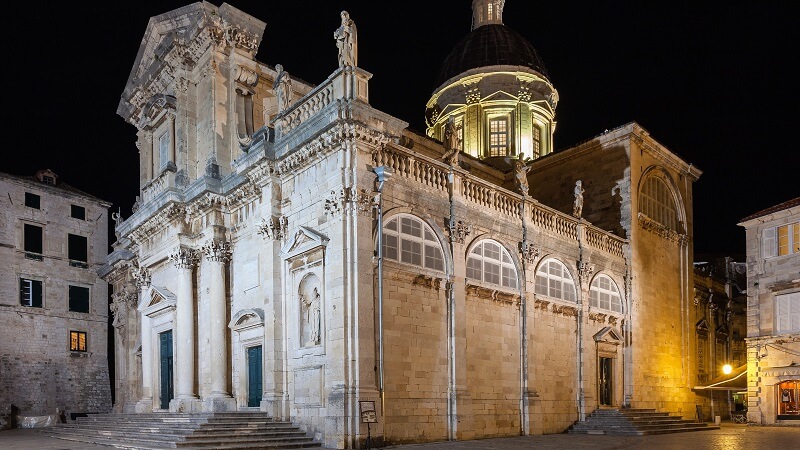 It’s located near the old port of the city. With its simple architecture and forming part of the city’s ramparts, this 14th century convent houses a rich collection of 15th century paintings, manuscripts and jewellery. The monastery also houses a museum dedicated to the history of the city.

Located on a rocky promontory to the west of the city’s ramparts, this 11th century fort rises 37 metres above the Adriatic and offers a beautiful view of the surrounding area.

Kayaking excursions of 2 to 3 hours allow you to follow as closely as possible the imposing city walls and then reach the island of Lokrum, with various stops on beaches and in caves located along the coast of Dubrovnik. Bring sunscreen and hats!

A cable car provides access to the summit of Mount Srđ to enjoy a breathtaking view of the city and its surroundings. The journey takes 3 minutes. The cable car was destroyed in 91 during the war but returned to service in 2010. At the top of Mount Srđ, in the former Napoleonic fortress, is the Croatian War of Independence Museum, which tells the story of the siege of Dubrovnik. 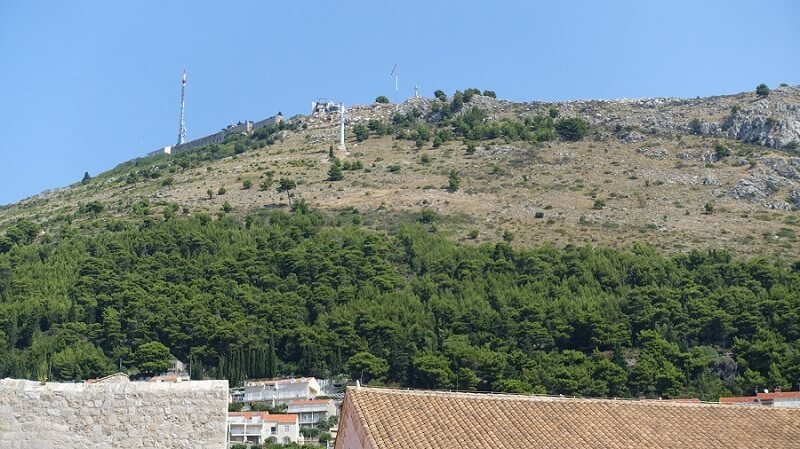 An island of 2 km² located 15 minutes by boat from Dubrovnik, and uninhabited because it’s supposedly cursed for anyone who wants to live there…. You only come here to bathe during the day and admire the magnificent views of the city and the sea. There are some old buildings such as a Napoleonic fort, a monastery and the Habsburg residence. The island is only accessible from April to November. 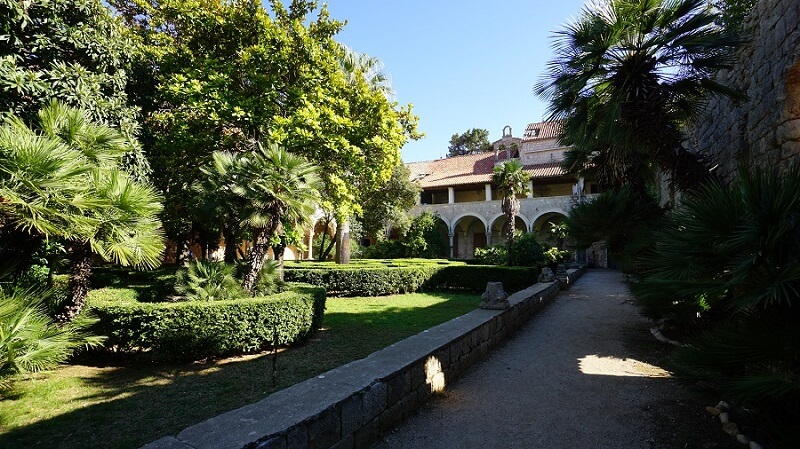 MORE THINGS TO SEE AND DO IN AND NEAR DUBROVNIK

If you have more time in Dubrovnik, here are some places to visit in the area:

BEFORE GOING TO DUBROVNIK