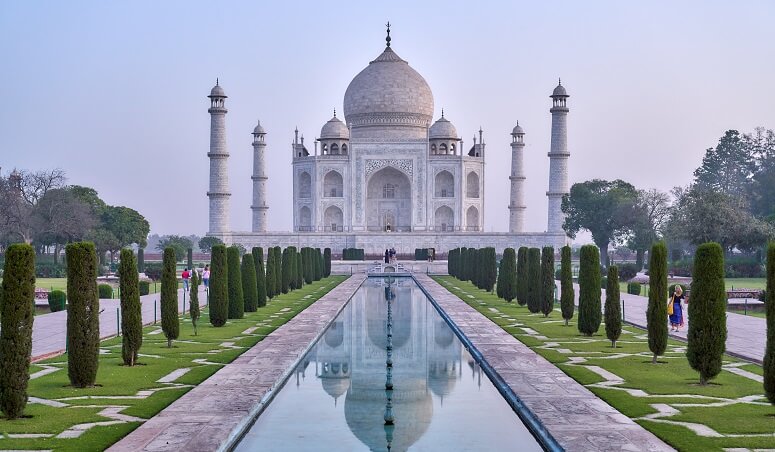 Visit the Taj Mahal in India 🇮🇳: a complete guide to prepare your trip

What is the Taj Mahal ? Located in Agra in northern India, it’s a huge white marble funeral mausoleum built between 1631 and 1648 on the orders of Emperor Shah Jahan in memory of his favourite wife, who died giving birth to his fourteenth child. It’s built on a pink sandstone base and surrounded by a garden with canals and fountains.

It’s about a hundred meters wide and 56 meters high, and encrusted with semi-precious stones. Passages from the Koran are also inscribed on it, which are not necessarily visible from afar.

The Taj-Mahal is the most visited place in India. 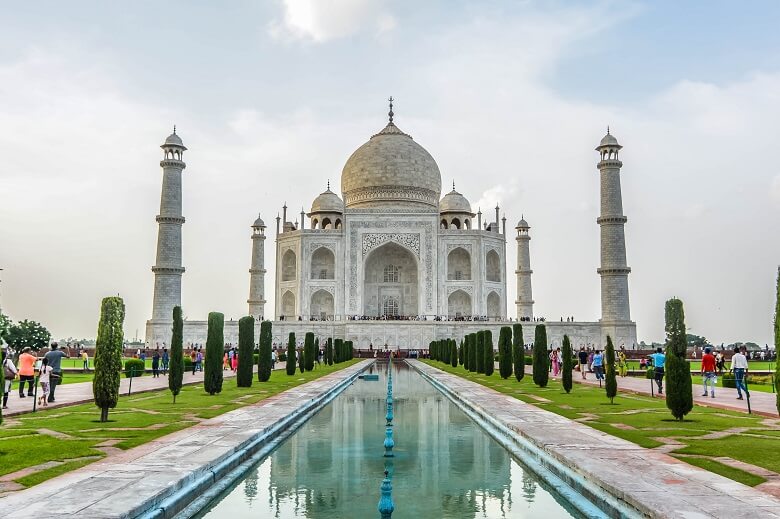 Where is the Taj Mahal located in India?

In which city is the taj mahal located? The Taj Mahal is located a few kilometres from the centre of the city of Agra, in the state of Uttar Pradesh, in northern India, about 200 km from Delhi. It was built on the banks of the Yamuna River, a tributary of the Ganges, at the southern end of the city. In addition to giving it a picturesque appearance, the river was used for water needs during the construction and development of the Taj Mahal gardens.

Agra is an important tourist destination not only because of the Taj Mahal, but also because of two other famous buildings of the Mughal era: the Agra Fort and Fatehpur Sikri, listed as UNESCO World Heritage Sites.

See the location of the Taj Mahal on Google Map:

How to get to the Taj Mahal?

Let’s see how to get to Agra (please leave a comment if some info need to be updated):

Plane ✈️: about an hour’s flight from Delhi via Kingfisher Airlines and Air India Regional, both of which make up the Delhi-Agra-Jaipur tourist triangle. This is not the cheapest option, and expect delays on flights.

Train 🚉: Many trains connect Agra from the country’s major cities, but if you go there in December-January the journey may be very long due to reduced visibility. Indeed in this period Agra and Delhi are covered by fog and trains must run slowly for more safety, but in normal times the train takes between 2h and 5h. From New Delhi the two best trains are the Bhopal Shatabdi Express and the Taj Express.

The main station is called Agra Cantt and is located southwest of the Taj and Agra Fort. From the station you can take a taxi or rickshaw to a hotel (150 rupees/50 rupees).

If you are arriving from the east of the country you may arrive at Agra Fort Station.

To get around Agra you will have to negotiate with taxi and rickshaw drivers, and they may also take you to their cousin’s workshop to buy carpets or something else because they earn a commission, so tell them that you are not interested in shopping.

If you are several people the most economical is to rent a taxi by the day by agreeing BEFORE on the TOTAL price and the places where you want to go.

Where to sleep near the Taj Mahal? 🛏️

You will find plenty of guesthouses and other hotels near the Taj Mahal, for all prices. The most expensive ones offer a view of the Taj Mahal, but make sure your hotel has a view of it. If your hotel does not have internet you can find internet cafes in Agra without any problem.

⚠️ Be very careful with monkeys that hang around Agra and don’t hesitate to sneak into rooms and steal things (be careful if you have a plastic bag on the street).

In general, the cheapest hotels near the Taj are of poor quality (dirty, no hot water…). It’s up to you to see where you prefer to stay according to your feeling and opinions on Booking. Anyway, you will spend more time on the rooftops spying on what is happening at street level and admiring the Taj Mahal in the distance than in your room.

These are the best rated hotels on Booking, according to your budget, and all with a view of the Taj Mahal and WIFI:

For eating, there are plenty of restaurants, either in the guesthouse where you stay or next door, and prices increase more or less depending on the view of the Taj. Go where there are people.

☕️ The terrace of the Saniya Palace Hotel offers a great view of the Taj Mahal, and you can sit there for a coffee.

The entrance fee to the Taj-Mahal costs 1100 Rupees and only gives the right to one entrance, if you leave and want to re-enter you will have to pay back the entrance ticket. Yes, it’s possible to go inside the mausoleum but it costs +200 rupees more.

It’s also possible to visit the Taj-Mahal during the full moon, but the visit lasts only half an hour, between 8:30 p.m. and midnight, and you must book your ticket one day in advance. Groups are limited to a maximum of 50 people.

You can also hire an official guide for a half-day tour of the Taj-Mahal and Agra Fort, but unless you know one that has been recommended, avoid taking a guide: there are many scammers who pretend to be such when they do not have certification. They will offer you their services for a low price but will probably want to take you to buy carpets from their cousin after the visit. Some may tell you that the guide service is included in the entrance fee, which is not true. In short, visit the Taj Mahal at your own pace.

If you speak English, you can download the CaptivaTour Travel audioguide on your phone, or audiocompass.

You can also rent audio guides in English next to the ticket offices at the entrance to the Taj and Fort Agra. Apparently it’s worth it.

How long to visit the Taj Mahal?

Plan two or three days on site (no more) with a day to visit the Taj Mahal at sunrise and sunset (if you want to take beautiful pictures), as well as a day to visit the Agra Fort and surroundings. The visit of the Taj takes a maximum of one or two hours (don’t forget that it’s closed to visitors on Fridays!).

Honestly, it’s not worth spending too much time in Agra if your main objective is to see the Taj Mahal. The city is dirty and unattractive, and the landscape around the Taj Mahal looks like a foul swamp.

Here are more places to visit in Agra:

What is the best time to visit the Taj Mahal? 🗓️ 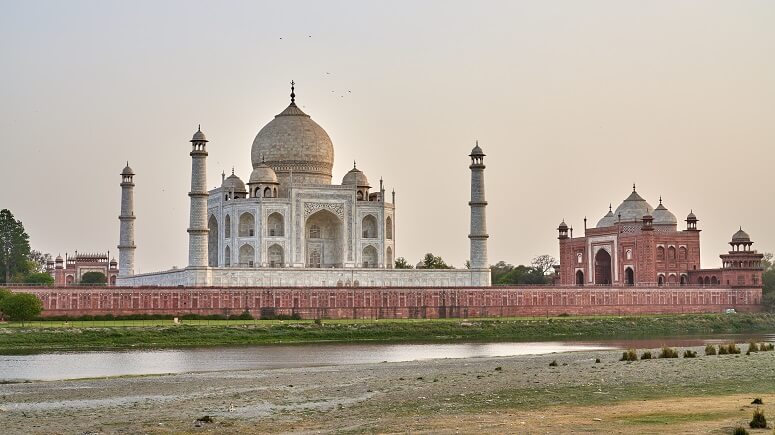 💡Some tips for visiting the Taj Mahal 💡

Here’s an interesting video to watch on Youtube (How to see the Taj Mahal for free):

The history of the Taj Mahal and some interesting facts 🔍

It’s worthwhile to learn about the history of the Taj Mahal, when and why it was built, before visiting it. Here are some interesting facts to know before you go: 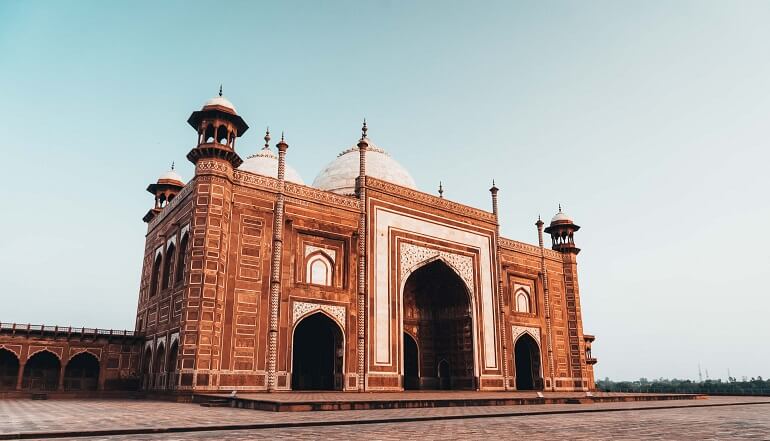 The best spots to photograph the Taj Mahal

It’s possible to admire the Taj-Mahal from several places to have a different point of view:

SOME TIPS TO TAKE GOOD PICTURES OF THE TAJ MAHAL:

✅ A magnificent building (from far and near)
✅ Several sites to see in Agra, not just the Taj-Mahal.

❌ Agra: monkeys, reelers, pollution, dirt, noise…
❌ The landscape around the Taj: dirty, ugly and depressing
❌ The climate in December-January, not ideal for taking pictures (mist) and it’s cold and humid.
❌ Tons and tons of tourists.

The symbol of India, it’s a pity that it’s located in such an ugly and unattractive landscape. To be honest, this is not the most important place I saw during my trip to India (I prefer Hampi, or Ajanta and Ellora). It’s beautiful, but not really interesting to visit. Yes, I am a jaded traveller. It’s up to you to make up your mind and decide if he deserves his title of “new wonder of the world”.

1 thought on “The Taj Mahal for beginners: Everything you need to know (travel tips)”