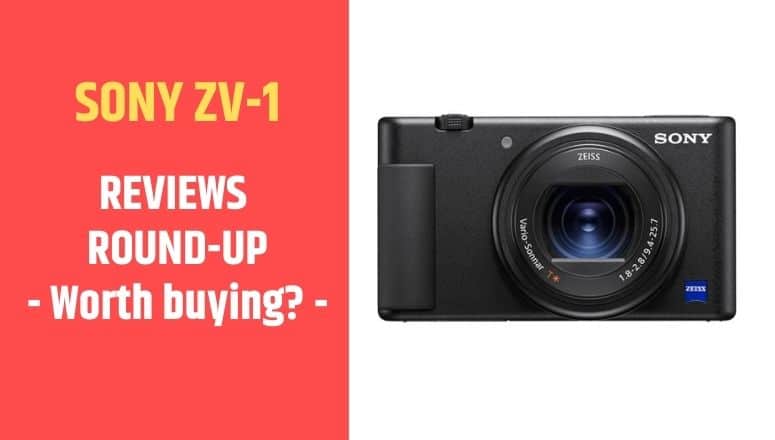 Reviews roundup – Sony ZV-1 : Should you buy it?

Here’s a roundup of all the Sony ZV-1 reviews, ratings and impressions from the web. Discover its strengths and weaknesses here!

The camera snaps photos in RAW and JPG formats, with a 24 fps burst mode. It shoots video in 4K at up to 30 fps, and in 1080p at up to 120 fps. It also includes a High Frame Rate mode at up to 960 fps for a 3 seconds burst, in a 912×308 resolution. There is a directional microphone included as well as a hot-shoe mount and an external microphone input. The Wi-Fi and Bluetooth connectivity will allow for wireless file transfers. The recordings are saved on a single SDHC/SDXC SD card slot. The battery will last up to 260 shots. This tiny camera only weighs 294g with the battery and card included.

So what do the critics think of the Sony ZV-1?

Overall most reviews say that the Sony ZV-1 is a great pocket camera for slow-motion and fast action photography. The burst rate is excellent, and the HFR mode allows for a creative use in video mode. The small size of the camera is perfect to bring it everywhere. The autofocus is doing a good job, but the stabilization can be cranky. The small sensor size is not very effective in low light settings. The battery life is poor, but it can be recharged on the go via USB. The low resolution touchscreen is also a bit limited. The camera will be good for videographers, but lacks performances on the photography side.

For more infos about the positive and negatives sides of the Sony ZV-1, check out the selection of reviews below:

Camerajabber.com – ★★★★½ – ‘The Sony ZV-1 delivers everything that a vlogger could wish for in a compact camera, and it comes with Sony’s excellent AF system. There are features to help inexperienced photographers/videographers/vloggers get good results, the exposure can be controlled automatically or manually and there’s a built-in ND filter plus Log and Gamma control. It makes it easy to produce great 4K video but lets you take control when you want to. It all adds up to a very enticing camera for vloggers.’

Dpreview.com – 85% (Gold Award) – ‘The ZV-1 is a solid option for vloggers and photographers looking for a compact camera with a fast lens and great video and still image quality. Its novel microphone and video-friendly ergonomics are big plusses, but we want to see Sony introduce a more modern touch interface and update their menus to appeal to a wider audience. Overall, whether you’re a dedicated video maker or just want an easy-to-use camera for good quality clips, the ZV-1 is worth a look.’

Digitalcameraworld.com – ★★★★½– ‘Some might dismiss the ZV-1 as yet another Sony RX100 variant, but it’s much more than that. The sensor and lens might be familiar, but the body, the controls, the audio and the rear screen are all new and different and optimised brilliantly for vlogging.’

Ephotozine.com – ★★★★★ (Recommended) – ‘The Sony ZV-1 may not excite photographers, with the RX100 series filling that role, but for vlogging and video, the ZV-1 is definitely our first choice at this price.’

Expertreviews.co.uk – ★★★★★ – ‘A pocket-sized video powerhouse, the Sony Z-V1 is the perfect tool for social content creation’

Pcmag.com – 3.5/5 (Good) – ‘The real drawback is the lens. The 24-70mm zoom is a fine choice for photography and many types of video, but it’s tight for vlogs where you want to point the camera in your direction and show your surroundings.’

Photographyblog.com – ★★★★½ (Highly recommended) – ‘With much of the technology and features the same, or at least operating in the same way, as recent A7 series cameras, Sony has created a small vlogging camera in the ZV-1 that is almost perfect with the technology currently available.’

Trustedreviews.com – ★★★★★ – ‘The Sony ZV-1 is a huge leap forward in merging the accessibility of a smartphone and the proficiency of a dedicated camera into one device. It’s not perfect, and we hope to see its overheating issues and convoluted menus resolved in its eventual successor, but as a first attempt, Sony has created the all-in-one device that vloggers have been waiting for.’

Techradar.com – ★★★★½ – ‘The Sony ZV-1 is the best compact vlogging camera you can buy. Its mix of a bright lens, superb autofocus and design tweaks like the side-flipping screen make it a powerful pocket video option with few peers. Those seeking super-smooth walking footage might find its image stabilization a slight let-down, and it has a few familiar usability quirks, but the ZV-1 remains the best video all-rounder in its weight class.’

Theverge.com – 7.5/10 – ‘The battery is incredibly tiny and will run out much earlier than you’ll want it to.’

1 thought on “Sony ZV-1 reviews roundup: all the scores”