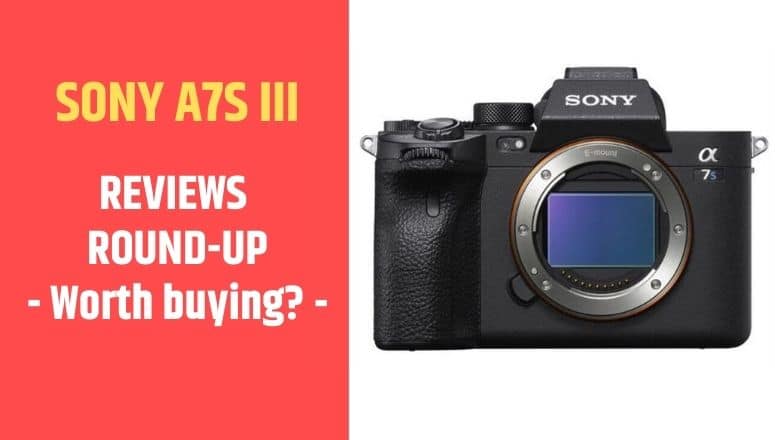 Sony A7S III reviews roundup: Should you buy it?

Here’s a roundup of all the Sony A7S III reviews, ratings and impressions from the web. Discover its strengths and weaknesses here!

The camera snaps photos in RAW and JPG format, with a 10fps burst in continuous mode. Videos can be shot in 1080P at up to 240 fps, or 4K at up to 60 fps in 10-bit 4:2:2 internal. The a7s III utilizes a dual memory card slot, one for CFexpress Type A cards, the other one for UHS-II SD cards. Its battery can last about 600 shots or 90 mins of video per charge. The camera has a Wi-Fi and Bluetooth connectivity for remote operation controls. The camera body weighs 614g with its battery and both memory cards included.

So what do the critics think of the Sony A7S III?

Overall most reviews say that the Sony a7s III is one of the best full frame mirrorless cameras for videographers. The video mode is very impressive, with its 4K mode at up to 120 fps 10-bit 4:2:2. The battery life is great, enough for long shooting sessions. The autofocus is powerful and the stabilization is solid. The sensor is a bit too weak for a still photo usage though, with only 12.1MP resolution. It still offers a good dynamic range, perfect for low light settings. Some regret the absence of a 6K or even 8K mode, and the lack of a waveform monitoring, very helpful for videographers.

For more infos about the positive and negatives sides of the Sony A7S III, check out the selection of reviews below:

Camerajabber.com – ★★★★★ – ‘After the 8K-capabilities of the Canon EOS R5, the Sony A7S III might seem a bit of an anti-climax. I’m sure some videographers were hoping for a big jump in resolution from the 12mp A7S II. However, Sony already has the 61Mp A7R IV and the 24Mp A7 III, so sticking with 12Mp means that the A7S III has even better low-light capability than its predecessor but with a much better autofocus system, a vari-angle screen and the highest-resolution viewfinder around. The A7S III is about more than grabbing the headlines for its resolution, it promises to make capturing 4K video easier than before and for that video quality to be the best 4K footage you can get from a Sony camera. It doesn’t disappoint as the quality of the footage is superb.’

Digitalcameraworld.com – ★★★★★ (Gold Award) – ‘It’s taken Sony five years to upgrade the video-centric A7S II to a Mark III, but the wait has been worth it for keen enthusiast and professional moviemakers. It might not boast 6K or 8K video resolution of some of its rivals, and with only 12.1MP it’s not a powerhouse super-stills machine either. But apart from a big and expensive cinema camera, it’s the only camera that can shoot 4K at 60p full frame with no crop, recorded internally, in 10-bit 4:2:2 with no limitations on recording time and with all the advanced AF functions still working.’

Engadget.com – 95/100 – ‘I can’t find many faults with this camera. Sony has addressed nearly every complaint I’ve ever had about previous A7-series cameras, but it didn’t just stop there. It also improved autofocus and other features that I already liked, keeping the A7S III far ahead of rivals.’

Ephotozine.com – ★★★★½ (Highly recommended) – ‘The Sony Alpha A7S III is an exceptional video camera, with excellent low-light performance, however, it may not have enough resolution for stills photographers.’

Photographyblog.com – ★★★★★ (Essential) – ‘Overall, Sony has been refreshingly single-minded on delivering a product that truly delivers in real world experience instead of flouting hollow headline grabbing numbers. Yes it’s ‘only’ 4K. Yes, it ‘only’ has 12.1MP. But within those parameters, you’ll be hard pressed to find a better camera than the Sony Alpha 7S III.’

Trustedreviews.com – ★★★★½ – ‘The A7S III is a good camera for photographers but an excellent one for video makers. Compact, well-built and thoughtfully designed, it possesses a raft of pro-friendly video capabilities and features that make capturing fantastic footage easier than ever. For demanding videographers, it’s quite possibly the best consumer camera on the market.’

Techradar.com – ★★★★★ – ‘Sony hasn’t just improved one or two aspects of its A7S series; with the new A7S III, it’s made an across-the-board set of upgrades that result in a camera that’s the best of its kind. It handles beautifully for video thanks to its articulating screen and touch display, while a full-sized HDMI port and excellent IBIS head the list of other treats. It’s significantly dearer than the A7S II was when it launched, but if you’re a videographer in need of big physical pixels and excellent low-light performance, this is as good as it gets.’