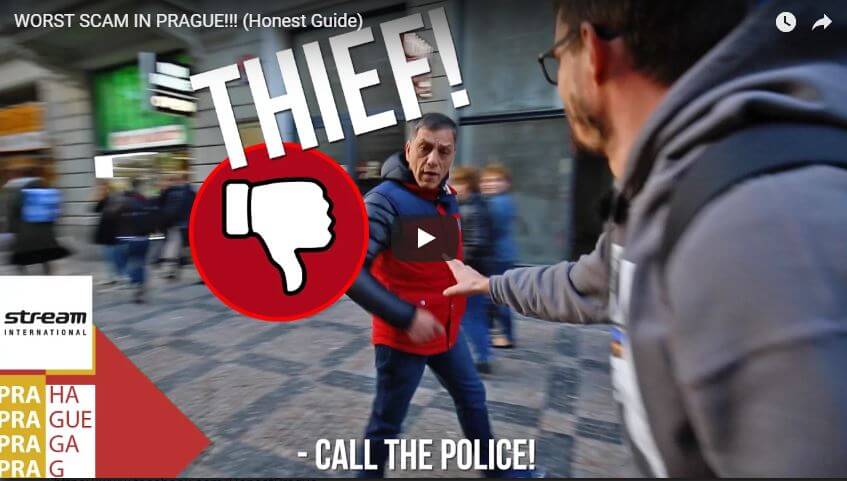 How not to get scammed in Prague!

Let me tell you a story: during my trip to Prague with my girlfriend, we decided to change some money. So we went to a foreign exchange office located near the main tourist square, and there was a guy in front of the entrance who offered us to exchange money with him because the rate wasn’t good. Obviously, we refused, and we checked the exchange rate at the foreign exchange office (actually the weird guy was right, the rate wasn’t good and they took a big commission on top of that).

So we left the money exchange, walked fifty meters and then I heard yelling behing me ‘My friend! my friend !‘. I turned and saw the weird guy who had just offered us to exchange money with him. I told myself ‘What the hell does he want again…‘ So he approached and took out a calculator, and asked me ‘How much money do you want to exchange? € 200? € 500? ‘. I told him I just wanted to exchange 50 €. And then he showed me the rate he could do on the calculator (a good rate, I have to say).

Then I said ok, let’s do that. He took out the notes, gave them to my girlfriend (until then I did not have a good look at the notes, she was holding them in her hand). My girlfriend was looking for a 50€ note in her wallet to give to the guy and menwhile he was chatting us, saying that there was a festival soon, and blah blah. We gave him the 50€ and he left quickly.

Then, my girlfriend said ‘Come on, we’re going to spend the cash‘ and we went into a snack. To laugh, she says ‘Maybe he just gave us Monopoly notes!‘. I said ‘Could I see the notes please?‘ and there at first glance, I knew we were ripped off: there was stuff written in Russian alphabet on it (in Czech Republic the alphabet is the same as France, or USA).

We left the snack suddenly to check if the scammer was still somewhere in the street, and of course he was already gone.

We then went to a small foreign exchange office nearby, and there we asked the guy behind the counter: ‘What’s kind of money is that?‘. He answered with a sigh, as if he had already said that hundreds of times before to other tourists: ‘It’s Bielorrussian money. It’s totally worthless. You must not exchange money on the street, you have been scammed‘.

My girlfriend was pissed off, and I laughed at being scammed so easily. I’ve been traveling on the other side of the world and I got scammed in Europe, like a total noob. I relativized thinking about the poor tourists who exchanged 100€ or more… the thing is if I had held the money in hand, I would have seen directly that it was not money Czech and told the scammer to f… off.

In short, before going to Prague, I HIGHLY recommend you to watch the videos of this youtuber who explains precisely all the scams to avoid there (actually he makes a lot of interesting videos, not only about scams, but about food, travel tips…). His chanel’s name is HONEST GUIDE.

It might help you a lot to prepare your trip in Prague!

Check also this one (if you travelling to Prague by plane):