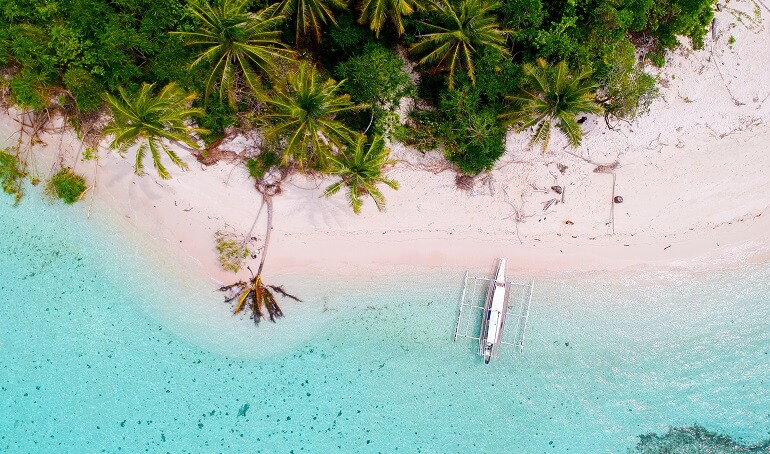 WHAT ARE THE BEST THINGS TO DO IN THE PHILIPPINES?

The only country with a Catholic majority in Southeast Asia, one could easily believe that we are in South America: here, no tuk-tuk or Buddhist temples, instead you’ll find jeepneys and old Spanish churches.

The Philippines offers an incredible variety of things to do and see: superb diving spots, hiking on volcanoes or simply relaxing on white sandy beaches that are among the most beautiful in Southeast Asia. Despite this, the country is much less visited than Thailand.

The Philippines is very accessible: the cost of living is low, it’s easy to travel in backpacker mode and most Filipinos speak English. However, with its 7000 islands you will have to plan your trip carefully.

Here are 16 things to see and do on a trip to the Philippines:

Intramuros was once the city of Manila (Manila): today it’s the oldest district in the capital. It was built in the 15th century, during the Spanish colonial period. You can admire the superb San Augustin church founded in 1571, which survived natural disasters and especially the numerous bombings during the Second World War. Known as’The Rock’, Corregidor is an island located in the Bay of Manila, 48 kilometres west of the capital. Thanks to its strategic position, it served as a military base for the Americans during the 2nd World War: you can see old fortifications, guns and barracks. In my opinion, this is a must-see visit to the Philippines. Located about 300 kilometres south of Manila, Boracay is a small island in the Visayas archipelago. It’s one of the most popular tourist destinations in the Philippines, for a good reason: it has the most beautiful beaches in Asia. If you go to Boracay, don’t miss Ariel’s Point. The most active volcano in the country, located on the island of Luzon near the town of Legazpi. Despite its many eruptions and the dramas it has caused, it’s to be seen because it looks like Mount Fuji, with its almost perfect cone.

El Nido is located in the Bacuit Archipelago, at the northern end of Palawan Island. It’s the tropical paradise of the Philippines: you can explore islands with white sandy beaches, sheltering spectacularly beautiful lagoons. Rice fields from 2000 to 6000 years old built on the mountains by Ifugao tribes, called “the eighth wonder of the world”, and which offer hikes in a superb landscape. Founded in the 16th century, Vigan is a well-preserved example of a Spanish colonial city in Asia. It’s known for its cobbled streets and unique architecture that is a blend of European and Asian culture. Vigan is on UNESCO’s World Heritage List. 8 – See whalesharks in Oslob or Donsol

It’s possible to see these sea giants in two places in the Philippines: in Oslob, where they are attracted by food (very controversial – more info here), and in Donsol, where you can observe them while swimming nearby. The best season to see them is between February and April. An island north of Palawan famous for its diving spots where you can see many well-preserved Japanese shipwrecks sunk during World War II. From Coron, you can also snorkel in Barracuda lake and Kayangan lake (picture below). Bohol offers many attractions, especially the Chocolate Hills, which are hills 30 to 50 meters high in the shape of cones, located in the center of the island (there are about 1200 of them). On Bohol, you can also see Tarsiers, a small primate with huge eyes. Another favorite spot for divers and snorkellers: Apo reef is the largest coral reef in the Philippines. It has been a marine reserve since 1996. You can observe an exceptional marine fauna (sharks, turtles…) as well as magnificent corals. Puerto Galera, about three hours from Manila, is famous for its many diving spots that are easily accessible: if you want to get your PADI diploma, this is the place to do it! If you don’t dive, the surroundings are nice to explore (you can visit waterfalls there). Taal is a 400-metre volcano that is still active, located two hours south of Manila. It’s a large caldera partially occupied by Lake Taal, which shelters an island that also contains another lake… you follow? Quite difficult to access (because it’s expensive and only accessible between mid-March and mid-June), Tubbataha Coral Reef is located in a protected marine park in the middle of the Sulu Sea, 180 km from Puerto Princesa (Palawan). It’s one of the top 10 best diving spots in the world, thanks to its very high biodiversity.

A carnival held in January each year in honour of Jesus on the island of Kalibo. Even if this feast is Christian, the participants have their faces made up in black and dance in indigenous costumes. The third Sunday in January is the most important day of the festival. An archipelago of ten islands (the largest is Batan) located at the northern tip of the country and which offers magnificent and very green landscapes, quite different from the rest of the Philippines.