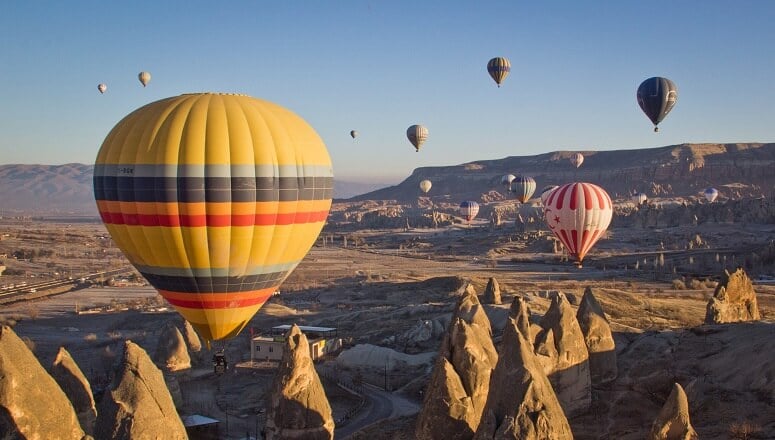 Hot air balloon ride in Cappadocia (Turkey): Everything you need to know before you go up in the air

10 million years ago, volcanoes in central Turkey erupted again to shape a landscape unique in the world: Cappadocia. An alternation of mountains, craters, plateaus and gorges over which many fairy chimneys watch. A landscape at the end of the world forged by volcano fires, ice from glaciation periods and rainwater. An exceptional place where man can measure the strength of the elements and time!

A region to be discovered from the sky, precisely from a hot air balloon. A relatively recent activity in the region, its development dates back only to 2005, but already considered a must for tourism in Turkey and around the world.

Here are all the things you need to know to prepare your hot air balloon ride over Cappadocia:

1/ Why make a hot air balloon flight in Cappadocia?

Hot air balloon flights are the best way to discover Cappadocia. Capable of flying high and slow, offering passengers boarding its nacelle a 360° view, the hot-air balloon allows you to experience the magnificence of the landscape with a single glance. From sunrise on almost lunar geological formations to the flight over the Red Valley and the ballet of the many other balloons in the sky, the activity is worth its weight in gold!

Beyond the beauty of the landscape, the flight itself offers an unforgettable experience. The pleasure of flying in the open air remains incomparable. The kindness of the Turkish crews adds to the magic of the experience. The small glass of champagne and the graduation ceremony of the adventure offer a moment of great conviviality. All those who flew this hot air balloon flight over Cappadocia have an extraordinary memory of it: the highlight of their trip to Turkey!

2/ How does a hot air balloon work?

The balloon where created by two french inventors in 1782, the Montgolfier brothers. Joseph-Michel and Jacques-Étienne, born in Annonay in the Ardèche region of France, had decided to take advantage of the lower density of heated air to make Icarus’ dream come true. After some experiments, they designed a paper-reinforced canvas balloon that flew away on September 19, 1783 in Versailles in front of Louis XVI with a sheep, a duck and a rooster as passengers! The first human flight took place on October 19, 1783 at the Folie Titon with Jean-François Pilâtre de Rozier.

Modern hot-air balloons still operate on the same principle: a gas burner sends hot air into the envelope, which becomes lighter than the ambient air rises by carrying the wicker basket where the passengers sit. This flight made possible by Archimedes’ thrust exerted by the mass of cold air on that of warm air trapped in the balloon remains undoubtedly the most magical: enough to reconcile you with the physics classes you had at school!

3/ Do you get airsick or dizzy on a hot air balloon?

Vertigo only occurs when there is a physical link between the subject’s position at a height and the ground, such as on a roof or balcony. This is obviously not the case for a balloon in flight. You can therefore enjoy this activity without fear of having to endure the unpleasant sensations associated with vertigo.

No risk of nausea either: balloon flight is particularly stable and the take-off and landing phases are always carried out smoothly. Passengers appreciate this slow air navigation at wind speed (between 7 and 20 km/h in general), quiet and in the open air. Truly bewitching, the hot air balloon succeeds in reconciling the most fearful with flight!

4/ When can I fly in a hot air balloon in Cappadocia?

The generally mild weather in Cappadocia allows you to fly in a hot air balloon all year round. Nevertheless, we recommend the period from April to October. During these seven months, the risk of the weather getting in the way of your balloon flight is lower than during the winter period.

Because the air is colder at these times of the day, flights are frequently scheduled at sunrise and sunset. More than a constraint, these schedules offer an extraordinary luminosity. The tortured relief of Cappadocia is covered with gold by the rays of the sun’s rays. 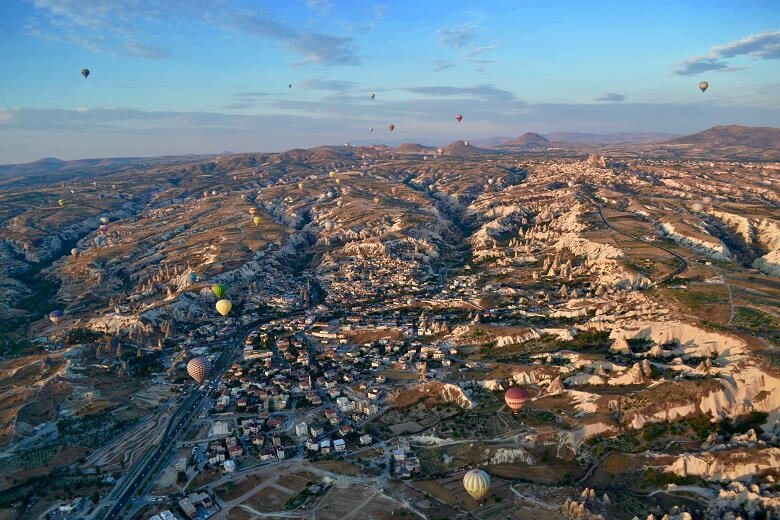 5/ How to dress for the hot air balloon flight?

The flight in a hot air balloon is carried out between 0 and 1000 meters. At this altitude, the temperature is the same as the one observed on the ground at the time of takeoff. Just make sure you dress in accordance with the usual temperatures and flight schedules! The operation of the burner emitting heat you should not be cold during the latter especially as advancing to the rhythm of the wind, it becomes imperceptible!

Given the presence of the burner, avoid wearing synthetic clothing and prefer cotton. Leave on the ground anything you may lose in flight. The best thing is to equip yourself with a small wool sweater that you will put on or take off according to your feelings.

6/ How many people can board the balloon?

Attached to the balloon, the basket is divided into 5 compartments: in the centre, one of them accommodates the pilot and co-pilot while those on either side of the balloon are designed to carry 4 to 5 passengers. The latter are equitably distributed in these passenger compartments to ensure the stability of the nacelle in flight.

A distribution in small groups that allows you to fully enjoy the experience and share it with globetrotters as passionate as you are!

7/ How long does the flight last?

As a general rule, the flight lasts from 1 hour to 1h30. A duration that will always seem too short to you because the experience is so sensational! For a flight at sunrise, the hotel is risen around 5am for a shuttle bus ride from the chosen balloon company between 5:30am and 6:30am. To the takeoff area! The burner and its fan operate to force-feed the envelope with hot air. On the plain, a multitude of multicoloured balloons take to the air. The show is already great!

When the perfectly inflated envelope is ready, passengers are invited to board. A magical moment! The irresistible impression of living the adventures of Doctor Samuel Fergusson, the mythical hero of Jules Verne’s novel “Cinq semaines en ballon”! Don’t forget your camera and its wide angle.

8/ Is it safe? Are there many accidents?

By nature, ballooning is very safe. Its only engine, Archimedes’ thrust, is not likely to fail! Despite everything, we do not play around with safety to avoid accidents in flight, especially balloon collisions. The site welcomes no less than twenty hot air balloon companies that use dozens of balloons every day!

Accidents are very rare and those that occurred in 2013 and 2014 have given rise to serious feedback to prevent them from happening again. Flights are operated by experienced crews and the organization follows strict rules. About thirty or more balloons rise at the same time in a superb ballet perfectly orchestrated! 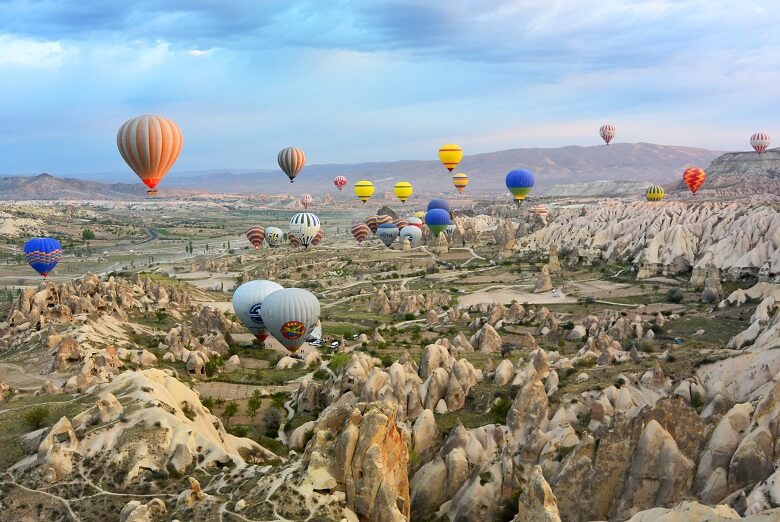 9/ How to take beautiful pictures from a hot air balloon?

For more information and to book your hot air balloon tour in Cappadocia, click here.