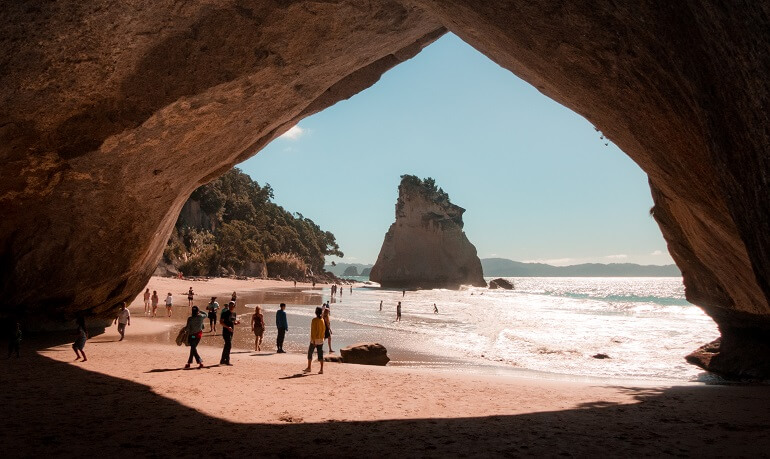 WHAT ARE THE BEST THINGS TO DO IN THE NORTH ISLAND OF NEW ZEALAND?

Let’s start with the North Island because that’s where you’ll certainly start visiting New Zealand, Auckland being the country’s international gateway (along with Wellington). It is home to about 75% of New Zealand’s population.

New Zealand is the ideal country for adventure and exploration lovers: you will find forests with millenary trees, mountains, beaches, volcanoes, wilderness and wilderness and can discover Maori culture.

Here are 15 things not to be missed in New Zealand:

Auckland deserves a few days of visit. Things to see and do in Auckland include: going to Mission Bay Beach, walking on Rangitoto and Devonport, going to the top of Mount Eden or One tree Hill, visiting the Auckland Museum and watching a rugby match in Eden Park.

A northeastern peninsula famous for its white sandy beaches and coastal landscape. Don’t miss Hot Water Beach, where at low tide you can make your own spa in the sand thanks to the underground hot springs, not to mention passing through the cathedral cove.

A beautiful region, and also a very popular destination for New Zealanders. The largest city is Tauranga. You can explore White Island, which is an active volcano.

An endless beach located at the northern tip of New Zealand. To do by bus, unless you have a 4×4 otherwise you risk burying your vehicle in the sand. You can also sled on the sand dunes. The easiest way to get there is to take a bus from Kaitaia.

5. Scuba dive or do snorkelling

For snorkellers and apprentice divers, go to Goat Island, further south. You can also go kayaking there.

Another popular destination for New Zealanders with Bay of Plenty, Bay of Island includes 144 islands with beautiful beaches. You may see dolphins or whales. Don’t miss Hokianga Harbour.

7. See giant Kaoris in the forest of Waipoua

The Kaoris (or Kauris) of the Waipoua forest are among the oldest and largest trees in the world. The most famous and largest, Tane Mahuta, is nearly 2000 years old and has a circumference of thirteen metres.

The city of Rotorua is known for its volcanic activity which gives off a sulphurous smell throughout the city, where you can see geysers and hot mud pools. Don’t miss Wai-o-tapu Park and its many colourful springs, Lady Knox’s geyser and Maori dance performances. If you are brave, you can also go rafting on the Kaituna River, which has a seven-metre waterfall (tutea falls).

Tongariro National Park, located in the Taupo region, is a World Heritage Site and one of the oldest national parks in the world. The park is home to three volcanoes: Mount Ruapehu, Mount Tongariro and Mount Ngauruhoe.

One of New Zealand’s most popular tourist attractions, located near the city of Waitomo. The caves are home to glow worms, worms the size of mosquitoes that produce blue light in the dark.

While you are in Waitomo, do caving in Lost World: you start with a 100-metre abseiling descent and then continue through a network of caves and underground waterfalls.

New Zealand’s largest lake is also one of the best places in the world to parachute. You can also go rafting, bungee jumping, kayaking…

Located near Taupo, Huka Falls waterfalls are easily accessible and free to visit. The flow rate is impressive. There are several paths along the rapids to walk and admire the falls.

Near New Plymouth, a volcano with a perfect cone shape that served as the setting for The Last Samurai with Tom Cruise. It is located in Egmont National Park. Take the time to walk around, the landscape is beautiful.

The number one attraction in Wellington is the Te Papa Museum. For a 360° view of the city, go to the top of Mount Victoria.

It is a conservation centre open to the public where you can see this emblematic New Zealand bird up close, in a place close to its natural environment. You can also see a species of lizard unique to New Zealand, the Tuatara.