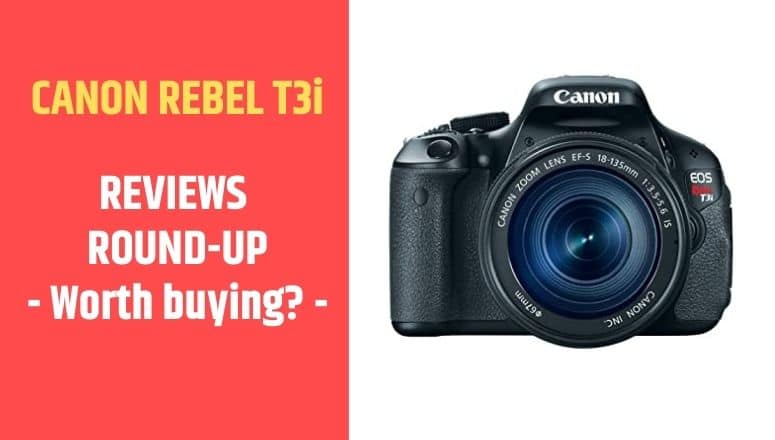 Here’s a roundup of all the Canon Rebel T3i / EOS 600D reviews, ratings and impressions from the web. Discover its strengths and weaknesses here!

Released in February 2011, the Canon Rebel T3i, also known as the 600 D in Europe, features an 18 MP APS-C CMOS sensor with a DIGIC 4 processor, a 9 points autofocus system, a 3” 1.4M dots fully articulated rear LCD screen, an optical viewfinder and a built-in flash.

The camera snaps the photos in JPG and RAW format, with a 3.7 fps burst in continuous mode, limited to 6 RAW images or 34 JPGs images. It records videos in 720P at up to 50 fps, or in 1080p at up to 30 fps. All data is saved on a single SDHC/SDXC card slot. The battery will last for up to 440 shots. The camera body with the SD card and battery included weighs 570g.

Overall most reviews say that the Canon Rebel T3i / EOS 600D is a good introductory DSLR for beginners. Despite being a decade old, the camera is still competent in photo mode for those who like the old school all-manual type of approach. The sensor has aged well, offering an appreciable dynamic range. The control dials are handy, though some features will only be accessible through menus.

There is unfortunately no in-body stabilization, and the autofocus is not performing well for today’s standards.

The video mode is also too limited for a practical use in the 4K era. The Rebel T3i is an affordable camera that has its drawbacks but still has some potential to explore.

For more infos about the positive and negatives sides of the Canon Rebel T3i / EOS 600D, check out the selection of reviews below:

Cnet.com – 7.8/10 ‘Though the image quality and general shooting performance are top-notch, if you’re upgrading to capture sports, kids, or pets, the T3i may not be able to keep up.’

Cameralabs.com – Highly Recommended ‘For those who simply want a good, solid upper-entry-level DSLR with great image quality and advanced movie features, the 600D / T3i is hard to beat.’

Lesnumeriques.com – ★★★★★ ‘A logical, but not indispensable evolution of the 550D, the 600D will not make an impression, but is a good, complete and efficient SLR camera.’