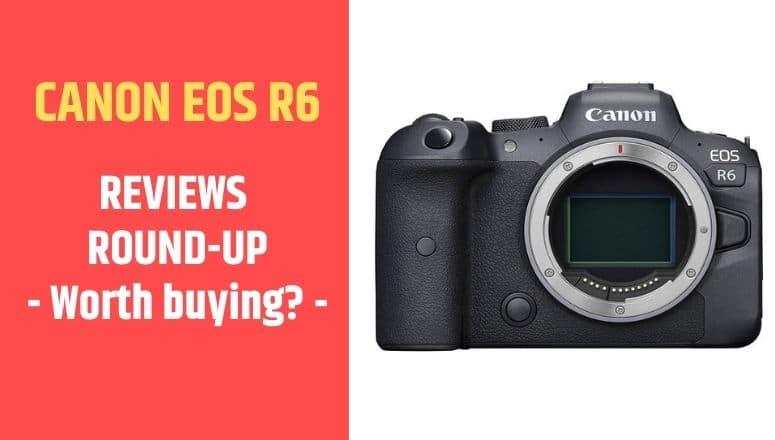 Reviews roundup – Canon EOS R6 : Should you buy it?

Here’s a roundup of all the Canon EOS R6 reviews, ratings and impressions from the web. Discover its strengths and weaknesses here!

So what do the critics think of the Canon EOS R6?

Overall most reviews say that the Canon EOS R6 is a great full-frame mirrorless camera made for experimented photographers and videographers. Its main assets are its good quality of images in Raw as well as JPEG, and also its battery life rated around 380 shots per charge. This Canon revels itself as an excellent camera for many using inside as outside.

However, we can say that R6 20 megapixels is a few low in resolution. Also, it’s not possible to reduce noise in Raw shooting. It’s a camera a little but complicated to use for some modes.

For more infos about the positive and negatives sides of the Canon EOS R6, check out the selection of reviews below:

Camerajabber.com – ★★★★★ – ‘It may not have a class-leading resolution but the Canon EOS R6 is a phenomenally good stills camera. Its autofocus system is fantastic and it can keep track of fast subjects moving in random directions with ease while shooting at 20 frames per second. In addition, the build quality and handling is extremely good, making it a delight to use. It’s also capable of producing high-quality video, although the 1.52x crop imposed on 4K video at 60p is a bit disappointing. ‘

Cameralabs.com – ★★★★★ (Highly recommended) – ‘Probably the biggest issue for potential buyers is the relatively low-sounding 20 Megapixel resolution, and while it’s true the R6 is technically out-resolved by many rivals when comparing test charts, you may not notice much difference in real-life. You’re much more likely to notice the speed and handling though which is up there with the R5, making it one of the most responsive and capable mirrorless cameras on the market.’

Dpreview.com – 90% (Gold Award) – ‘The Canon EOS R6 offers much of the capability of the EOS-1D X III in an enthusiast-level mirrorless body. It’s only a 20MP camera but one that can produce great results across a huge range of photographic challenges. The tendency to overheat if used before shooting video undermines its appeal for people shooting video and stills together, but the footage is best-in-class if you can work around this limitation. A superb photographers’ camera, even if it’s not quite the perfect hybrid model.’

Digitalcameraworld.com – ★★★★★ (Gold Award) – ‘The Canon EOS R6 is a versatile all-round camera that can shoot pretty much anything. Aside from a few differences, it’s essentially an EOS R5 with lower resolution and less high-end video. If you’re content with fewer megapixels, you’ll enjoy one of the most advanced and impressive cameras we’ve ever seen. Its autofocus is truly otherworldly, the in-body image stabilization is the best of any full-frame system, the 4K video is crispy and delicious (though occasionally overcooked), the dual memory cards make it suitable for professional work, and it unlocks the brave new world of Canon’s phenomenal RF lenses.’

Ephotozine.com – ★★★★½ (Highly recommended) – ‘The Canon EOS R6 is a great choice for those looking for a highly reliable camera with great AF, and great image quality.’

PCmag.com – ★★★★★ (Excellent) – ‘The EOS R6 is Canon’s best mirrorless camera, with a stabilized, full-frame image sensor and an outstanding autofocus system, but video-first creatives will want to look elsewhere.’

Photographyblog.com – ★★★★★ (Essential) – ‘The new EOS R6 is the mirrorless camera that the majority of Canon owners have been longing for, for so long.’

Techradar.com – ★★★★½ – ‘The Canon EOS R6 might be the mirrorless alternative to the very popular EOS 6D Mark II DSLR, but it’s way more than just an upgrade. Its autofocus performance and image stabilization are best-in-class, while a blitzing burst speed makes it perfect for any sports or wildlife scenario. Long story short, it’s one of the best all-rounders you can get, although its 20MP sensor resolution might not suit everyone.’

1 thought on “Canon EOS R6 Reviews Roundup: all the scores”