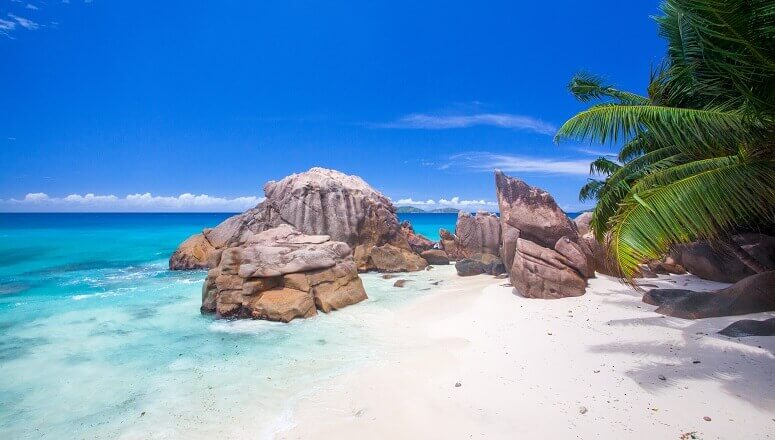 WHAT TO DO IN SEYCHELLES?

A vast archipelago of about 115 islands and islets scattered throughout the Indian Ocean, the Seychelles is a destination that makes lovers of fine sandy beaches and turquoise water dream, and rightly so! This small country of 93,000 inhabitants is known for its beaches lined with magnificent granite outcrops that are often seen in photos and are generally associated with dream holidays and honeymoons.

Nature reserves make up almost half of the territory and you can see many birds, turtles, dolphins and sometimes whales. Scuba diving lovers will be able to discover magnificent corals and fish.

The three major islands are Mahé, Praslin and La Digue: The gateway to the country is Mahé, where is located the capital, Victoria, and the international airport. 27 km long and 7 to 10 km wide, it’s easy to explore on foot or by bike. There’s also the highest point of the country, the Morne Seychellois (905m).

Where are the Seychelles islands located? Seychelles is located in the western Indian Ocean, near the equator, about 1,500 km directly east of the Kenyan coast and 1000 km north of Madagascar. Despite this distance, Seychelles is part of the African continent.

When to go to Seychelles? The tropical climate of the Seychelles is pleasant all year round, with stable temperatures around 29-30 °C. There are two seasons that punctuate the lives of the inhabitants: The rainy season (October-November to March-April), the hottest and wettest, especially in December and January, then the cool season from April-May to September-October, which is the windiest. The best time to visit the Seychelles is therefore in summer, from June to September, although the transition periods between the seasons are also very pleasant to visit the country, and allow you to avoid the influx of tourists in December, July and August. However, the country can be visited all year round without any problems because it’s far from cyclone areas.

This selection of the 10 best things to do and see in Seychelles can help you prepare your travel itinerary by giving you a taste of the essential activities and places not to be missed.

WHERE TO SLEEP IN THE SEYCHELLES?

Here is the top hotels in Seychelles that have the best ratings on Booking, classified by price range:

TOP 3 BEST HOTELS IN THE SEYCHELLES

To save you time, here are the best rated hotels on Booking, depending on your budget:

Here are 10 must-see things to do and see during a trip to the Seychelles:

Victoria, the capital of the Seychelles, is located northeast of Mahé, the largest island in the archipelago. Its architecture and the Vauxhall Clock Tower recall its long colonial past. In the city centre, a cheerful hubbub rises from the Sir Selwyn Selwyn Selwyn Clarke Market offering fruit, vegetables, spices and fish at the bottom; clothing, souvenirs and handicrafts at the top. In the National Museum you will discover the history of the Seychelles and in the Natural History Museum its fauna and flora. The botanical garden invites you to take a peaceful walk among colorful flowers, ornamental plants and palm trees before visiting the turtles. 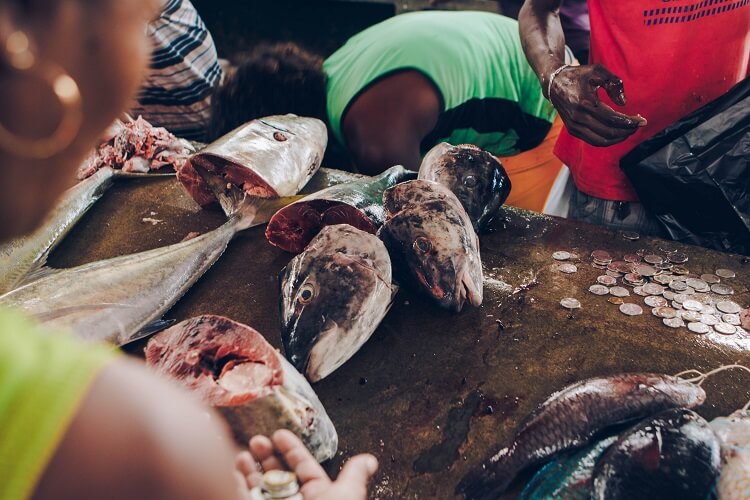 This park, located in the northern part of Mahé, occupies about 1/5th of the total area of the island, i.e. some 30 km² covered with tropical forest. A single road, called Sans Soucis, crosses this park, which has nine hiking trails to explore. The Morne Seychellois, whose summit reaches 906 m, the cliffs of the Trois Frères, which reach a height of 699 m, and the Morne Blanc, which climbs to 667 m, require good physical resistance. All these routes allow you to discover nature and wonderful landscapes.

3. THE BEACH OF ANSE INTENDANCE

Anyone who wants to make his friends jealous must go to the south of Mahé and take a picture of the paradisiacal beach of Anse Intendance. White sand, coconut trees protecting from the sun, granitic rocks, turquoise water make this beach one of the most beautiful in the Seychelles. As there is no reef off this cove, the sea is deep and the strong waves offer the best conditions for surfers and bodyboarders. The place is quite isolated but a small beach bar offers cold drinks and snacks.

La Digue, located 45 km from Mahé, has three villages: La Passe, La Réunion and L’Union. For many, it is the most beautiful Seychelles island to discover by bike. The island is covered by a dense jungle crossed by some trails and its beaches, such as Anse Coco, still in the wild are superb. With its granite rocks that the wind has sculpted over time, Anse Source d’Argent is one of the most photographed beaches in the Seychelles. 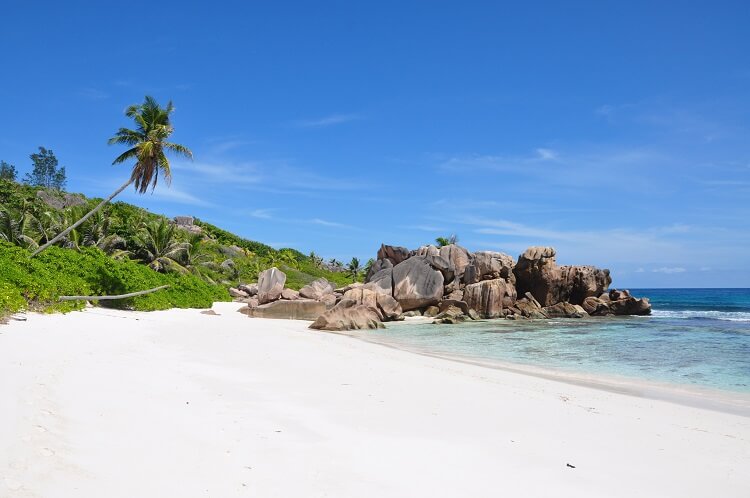 With 26 km², Praslin is the largest island after Mahé from which it is 37km away. We go there by plane or boat. Its relief consists of rolling hills covered with dense forest. The Vallée de Mai, for which admission is charged, is the main attraction. It takes two hours to walk through this UNESCO World Heritage rainforest and discover the famous sea coconut, nicknamed coconut, and rare birds such as the black parrot. The beaches at Anse Lazio and Anse Georgette are heavenly and invite you to relax, swim and snorkel.

Three islets are reserves that nature lovers cannot miss, but you must follow the guide. Cousin Island, 2.5 km from Praslin, has the largest number of endemic plants and animals in the Seychelles. Many hawksbill turtles come to lay eggs. 10 km from Praslin, Arid Island has 3o rare bird species, many lizards, turtles and crabs. 100km from Mahé, Bird Island is home to millions of birds. The plane making only one trip per day, one night on the island is mandatory.

Curieuse Island is only a few cables from Praslin and its access is subject to a charge. This place was used as a leper colony until 1965. Currently uninhabited, the island is home to many giant land turtles and also marine turtles that come to lay eggs on the beaches. Mangroves, sea coconuts and other animal and plant species are also preserved. Giant turtles roam freely but like to gather near the Laraie Baie reception centre where they are fed. Diving and snorkeling are practiced on the west side towards Saint-Pierre islet. 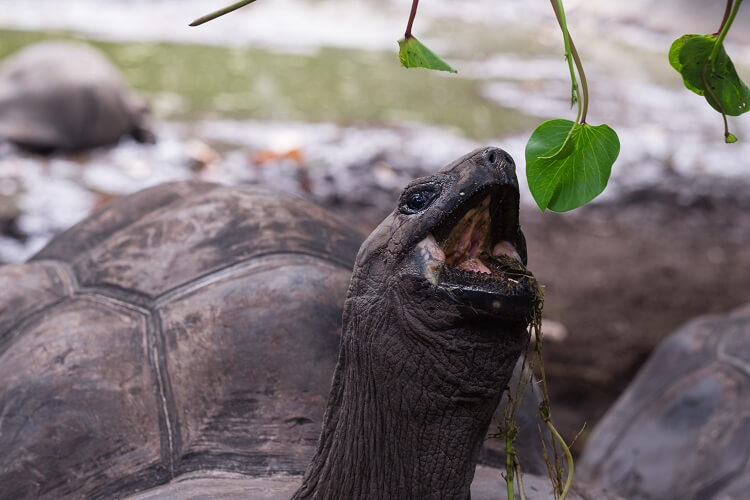 Located 30km from Mahé, Silhouette is the third largest island in the archipelago. A helicopter makes regular flights from Mahé. Guests at Hotel La Belle Tortue and Hilton Seychelles Labriz Resort & Spa, the only two hotels on the island, arrive by private boat at La Passe, a small port where most of Silhouette’s 100 residents live.
93% of the territory is covered by an intact tropical forest criss-crossed by paths. Between jungle and ocean, the beaches invite you to relax. Others prefer diving because many tropical fish species inhabit nearby waters.

The Seychelles is a giant aquarium where hundreds of fish species swim with amazing shapes and colours. There are many diving sites north of Mahé, most of which are accessible from Beau Vallon: the Islet, Brissare Rocks, Shark Bank and Fishermen’s Cove Reef offer huge schools of snappers, manta rays, barracudas, reef sharks, turtles and the impressive whale shark. The wrecks of three boats immersed in this area are very interesting to explore. Around Praslin, the sites are accessible from Anse Volvert.

The oldest Seychelles marine reserve is located 5 km off Mahé near the capital. This set of 6 islands is named after the largest of them, Sainte-Anne. The 3.8 km² park aims to preserve marine biodiversity while allowing tourists to access certain areas with an entry ticket. This real underwater aquarium with clear waters is full of exceptional fauna and flora. Snorkeling allows you to discover no less than 150 marine species as well as magnificent living and colourful reefs. 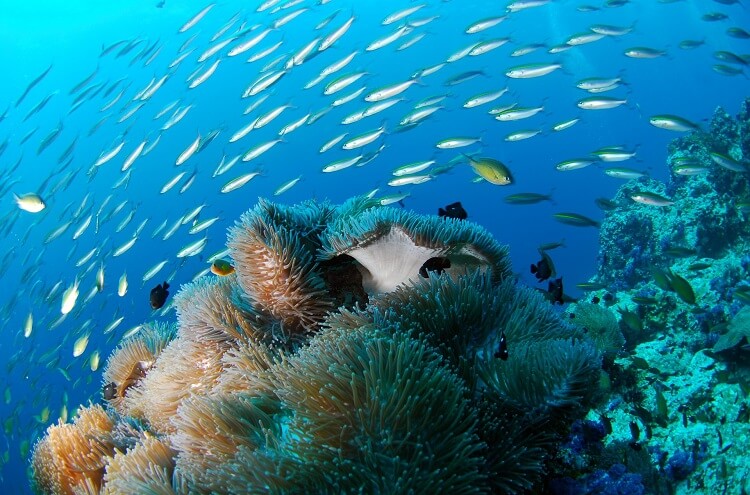 MORE THINGS TO DO AND SEE IN SEYCHELLES

If you have some time in the Seychelles, here are some other places to visit that are worth a look: