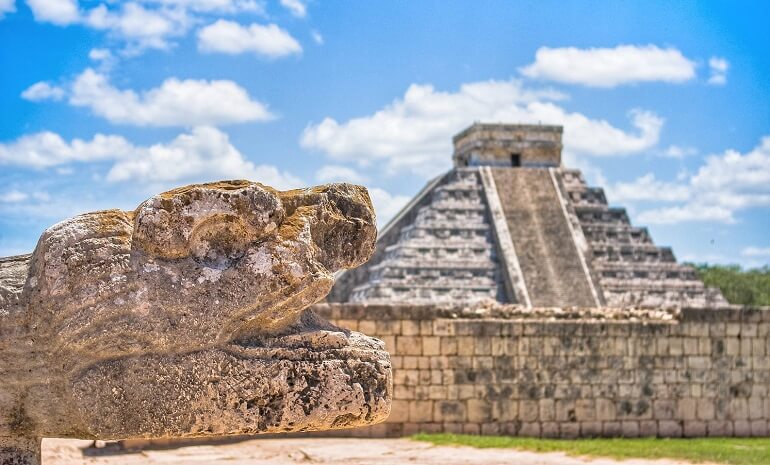 WHAT ARE THE BEST THINGS TO DO IN MEXICO?

Ancient pyramids surrounded by lush vegetation, white sandy beaches, turquoise blue and warm sea, Mexico is the perfect destination because with its multitude of activities, everyone is sure to spend a dream vacation.

The best time to visit Mexico is between October and April, it is dry and the heat is still mild.

On this page, you will be able to discover in pictures the main experiences not to be missed in Mexico, its must-see tourist sites and the lesser-known but worth a visit attractions (tourist cities, pyramids and Mayan temples, islands…).

Although it is impossible to see everything at once, this selection may be useful for you to plan a travel itinerary if you are going to visit Mexico for the first time by giving yourself a taste of the best things to do and places to visit.

Here are 15 things to do and see while travelling in Mexico:

There are several interesting sites to visit in the Mexican capital: do not miss Zócalo, which is the main square dominated by the huge cathedral. Mexico City also has many museums, in particular the National Museum of Anthropology, which has a huge collection of objects from pre-Hispanic cultures. 2. The Pyramid of the sun in Teotihuacán

One of the most famous archaeological sites in the country, where you can discover a gigantic pyramid 70 metres high that dominates the remains of an ancient pre-Columbian city that was one of the largest in the world at that time. It is an excursion to do from Mexico City, only 50 km away.

Located in the state of Chihuahua, Las Barrancas del Cobre (Copper Canyon) is a set of six spectacular gorges that can be discovered by Mexico’s only passenger train, the Chihuahuahua-Pacific (also called El Chepe). The route passes through huge canyons even deeper than the Grand Canyon in Arizona. The train departures are from Los Mochis but the most beautiful part of the route is between El Fuerte (80 km from Los Mochis) and Creel. Tip: Sit on the right side of the train to enjoy the scenery! 4. The colonial city of Guanajuato

An old mining town with a quiet atmosphere, surrounded by mountains. It was founded by the Spaniards and listed as a UNESCO World Heritage Site for its beautiful Baroque churches and colonial-era buildings. It is also known for its mummies and underground street network that allow you to explore the city. To see: see the sunset from the statue’El Pípila’ and the Ruta Panorámica. Several temples and pyramids are absolutely worth visiting if you are going to Mexico: Accessible by ferry from Playa del Carmen, Cozumel Island is one of the best places on the planet to dive whether you are an experienced diver or a beginner. It is located near a coral reef that is the second largest in the world after Australia. The water offers a very good visibility, there are many different spots and even by simply snorkelling you can discover the beautiful seabed and cross turtles, rays, sharks… Accessible from the city of Ciudad Valles (four hours drive from San Luis de Potosi), Huasteca is one of the most beautiful regions in Mexico, best known for its natural attractions: its landscapes and lush vegetation, its waterfalls (Tamul and Micos) and turquoise water lagoons, its rivers, caves and impressive chasms among the largest in the world (El Sótano de Las Golondrinas and its 376 meters deep), several archaeological sites…  For lovers of extreme sports, you can practice many activities such as rafting, kayaking, diving, canyoning…

A 1h30 drive from Ciudad Valles is also Las Pozas, a sculpture garden invaded by the jungle. The capital of the state of the same name, located in the south of the country. The pretty city of Oaxaca is located at an altitude of 1500 meters. You can visit many buildings and monuments dating from colonial times that are now listed as World Heritage Sites. 10 km from Oaxaca is the archaeological site of Monte Albán. An hour’s drive south you can also admire the petrified waterfalls of Hierve el Agua. 9. Swimming in the Cenotes de Valladolid

Cenotes are chasms at the bottom of which are natural freshwater pools formed after thousands of years of erosion. The Mayans sometimes threw offerings and made human sacrifices there. There are several in the vicinity of the charming city of Valladolid (including one in the city centre itself). It is an ideal stopover after a long day of visit because the water is refreshing and you can swim safely in a spectacular setting. 10. The pre-Columbian site of El Tajin

The main tourist attraction of the State of Veracruz, between Teotihuacan and Palenque, it is a UNESCO World Heritage Site. It is a pre-Columbian site built by the Totonaques, the most important and best preserved in Mexico. Among the fifty monuments restored, the most famous is the pyramid of niches, where you can see sculpted reliefs.

An uninhabited island located in the southern Gulf of California, about 30 km north of the city of La Paz. It is designated by UNESCO as a biosphere reserve. To visit for its spectacular landscape of pink stone eroded by the wind and for its wildlife: you can see a colony of sea lions, manta rays, dolphins, turtles and whale sharks. You can snorkel, dive, camp, kayak. Also worth seeing: the superb bay of Balandra which faces Isla Espiritu Santo. The Monarch Butterfly Biosphere Reserve is located in Mexico in a mountainous region about 100 kilometres northwest of Mexico City. In early November, millions of monarch butterflies from the United States and Canada took refuge in the reserve’s firs to spend the winter until spring. The spectacle is impressive because they form huge clouds that transform the trees into orange and cause the branches of the trees to bend under their weight. A superb colonial city with narrow cobbled streets and surrounded by mountains in the heart of Chiapas, one of the best preserved in Mexico. It is a pleasant city that can be explored on foot to discover typical craft markets, traditional neighbourhoods and colourful houses. San Cristóbal de las Casas is also a good base for exploring Chiapas. Be careful, it is very cool (the city is located at 2120 meters above sea level).

Cabo San Luca is one of the best places in the world to see whales, as they arrive in large colonies between December and March to give birth to their young and feed there. With five different species, it is one of the largest concentrations of whales in the world. You can see them from the beaches or get as close as possible to them by boat. A very beautiful colonial fortified city with narrow streets and full of charm, listed as a UNESCO World Heritage Site. It has a historic centre where you can admire many Baroque churches and chapels. San Miguel de Allende enjoys a temperate climate because it is located at an altitude of 1850 metres. Also worth visiting in Mexico