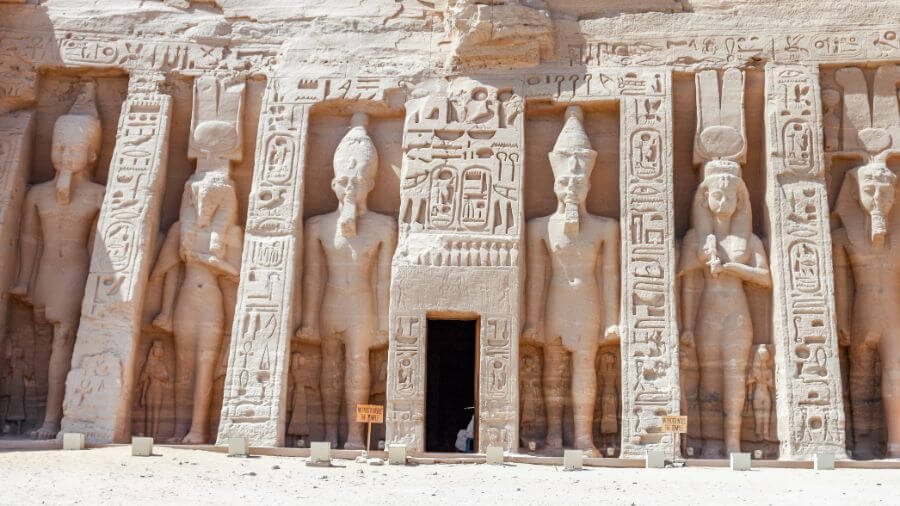 WHAT ARE THE BEST THINGS TO DO IN EGYPT?

On this page, you will be able to discover the essential experiences not to be missed in Egypt, its essential tourist sites as well as the activities to be done absolutely.

This selection may be useful in preparing an itinerary and organizing your trip to Egypt, giving you a taste of the best things to do and places to visit.

As the practical information is evolving rapidly, do not hesitate to leave a comment if there are any points to change or if you want to share good tips for travelling to Egypt.

Here are 10 must-see things to do and see on a trip to Egypt:

1. THE PYRAMIDS OF GIZA AND THE SPHINX

Located just near Cairo are these imposing monuments built almost 5000 years ago. The sphinx stands guard over the ancient colossal tombs of the pharaohs, which are the last of the seven wonders of the ancient world that still exist today. The inauguration of the future Great Egyptian Museum located at the foot of the pyramids of Giza is planned for 2018

The Red Sea is one of the world’s best destinations for scuba diving, with its clear waters and exceptional seabed teeming with fish and corals. The spots are accessible to both beginners and advanced divers. A must see: Ras Mohammed National Park and the wreck of the SS Thistlegorm. Where to go: Among the most famous diving centres are Sharm el-Sheikh, Dahab and Hurghada.

3. LUXOR AND THE VALLEY OF KINGS

It’s the richest archaeological site in the world: it’s where the pharaohs were buried and hoped to meet the Gods in the afterlife. Don’t miss: Hatshepsut’s funeral temple, Memnon’s Colosses, the Ramesseum, Amon’s temple and the spectacular Karnak temple on the east bank of the Nile. Visit early in the morning to avoid the heat and plan several days to see as many monuments as possible. It’s possible to admire the landscape by hot air balloon.

4. TAKE A CRUISE ON THE NILE

One of the best ways to discover the landscapes of Egypt, the majority of cruises are between Luxor and Aswan because it is here that we find the largest number of monuments (4 to 8 days depending on the stopovers). Another option is to take a felucca ride, boats used since ancient times.

Located near Aswan and accessible only by boat because it’s located on an island, it’s one of the most extraordinary temples in Egypt. Isis, one of Egypt’s most important deities, was worshipped there. The temple was entirely moved from the island of Philae to Agilka after the construction of the Aswan dam.

Located not far from the border with Libya, it is one of the most picturesque places in Egypt, very isolated but still authentic, in a landscape of lush orchards in the middle of the desert. Plan at least two days on site to explore the area (palm groves, springs, salt lakes…) and relax.

7. THE HORUS TEMPLE IN EDFU

Located in Edfu on the left bank of the Nile between Aswan and Luxor, it is one of the best preserved temples in Egypt and one of the largest with Karnak. It is dedicated to the cult of Horus, the Egyptian falcon-headed god.

8. THE TEMPLES OF ABOU SIMBEL

Discovered in 1813, it is one of the most beautiful archaeological sites in Egypt. It is located in the very south of the country near the border with Sudan. The temples of Abu Simbel were built under the reign of Rameses II (-1304 to -1213). Once carved on the cliff, the temples had to be moved because they were threatened by the rise of Lake Nasser.

9. THE EGYPTIAN MUSEUM IN CAIRO

It is one of the largest museums entirely dedicated to ancient Egypt. It preserves more than 160,000 objects, including the Tutankhamun treasure discovered in 1922, which is displayed on a large part of the first floor. It is forbidden to film or photograph.

Located in the heart of the Sinai Peninsula at an altitude of 1570 metres in a fabulous mountainous landscape, this fortress-like monastery houses one of the oldest Christian monastic communities still in operation. The visit of the monastery is usually done with an excursion to Mount Moses (also called Mount Sinai) to see the sunrise or sunset.

MORE THINGS TO DO AND SEE IN EGYPT

If you have some time in Egypt, here are some other places to visit that are worth a look:

THE ESSENTIALS OF EGYPT ON GOOGLE MAP