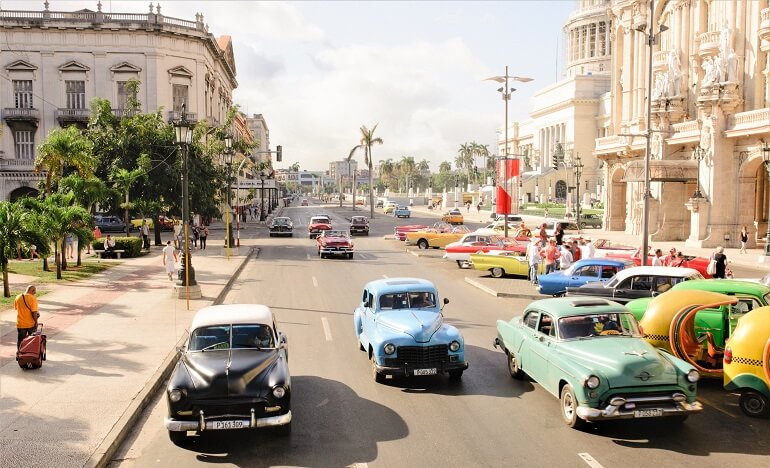 WHAT ARE THE BEST THINGS TO DO IN CUBA?

On this page, you’ll discover in pictures the main experiences not to be missed in Cuba, its essential tourist sites and the less known but worth a visit attractions (cities, national parks, islands…).

Although it is impossible to see everything at once, this selection may be useful for you to plan a travel itinerary if you are going to visit Cuba for the first time by giving you a taste of the best things to do and places to visit.

Book your hotel in Cuba now on Booking.com

Here are 16 things to do and see during a trip to Cuba:

Several things are to be seen in the Cuban capital: the old quarter of Havana, the book market in Plaza de Armas, the Necrópolis de Cristóbal Colón, the Palacio de los Capitanes Generales and a walk on the malecon (seaside). The city of Trinidad is home to many 16th century colonial buildings that can be visited through cobbled streets. It is classified as a UNESCO World Heritage Site. Visit the tobacco plantation of Alejandro Robaina, the creator of the Vegas Robaina cigar brand. You can see the different stages of tobacco production considered one of the best in the world. Ideally to be visited between October and January. Playa Azul, in Varadero, is the most famous in the country. Also to be seen: Guardalavaca, Playa Paraíso and Playa Sirena, Playa Ancón near Trinidad. To access the beaches of the South Islands, you will have to go there by boat (see n°11).

The second largest city in Cuba, to visit in particular in July to see the Carnival (from June 24 to July 26). 6. The Vinales Valley and the Cordillera de Guaniguanico

The cordillera de Guaniguanico (Guaniguanico mountain range), in the province of Pinar del Río, is the main mountain range in western Cuba. You can see the landscape of the Viñales valley and its “Mogotes”, rounded rocky mountains.

7. The Palacio del Valle in Cienfuegos

A very beautiful palace built in 1917 in an oriental style, where you can have a drink on the terrace while enjoying a beautiful view. To visit if you are going to Cienfuegos. Located not far from the city of Trinidad, at an altitude of 700 metres, you can hike in the middle of the forest and swim in superb waterfalls. To see: the waterfalls of El Nicho (far north of the Parque Natural Topes de Collantes).

The country’s third largest city was once one of the first villages founded by the Spanish. You can stroll through its winding streets and discover the old colonial architecture of the historic centre, very well preserved. 10. Explore the region around Baracoa

Located just east of the island, Baracoa is an ideal base to discover the region’s forests and rivers. Discover the archipelago of Los Canarreos by sailboat from Cienfuegos. To see: the white sand of Cayo Largo, diving or snorkelling in Cayeria Los Majaes, seeing iguanas in Cayo Rico. Located on the Isla de la Juventud, in southwest Cuba, visit the former circular prison where Fidel Castro was imprisoned from 1953 to 1955, as well as many counterrevolutionaries. The museum is located just next to the Bay of Pigs and commemorates the failed invasion that was organized by the CIA in 1961 to overthrow Fidel Castro. Many remains can be found there as well as explanations about this invasion. A true antiquity, this electric train goes from Havana to Matanzas and allows you to discover the Cuban countryside.

Gran Parque Nacional Sierra Maestra is home to the country’s largest mountain: the Pico Turquino. A hike will allow you to see rare birds as well as wild orchids and giant ferns. 16. The biosphere of Las Terrazas

Las Terrazas is a community and nature reserve located in western Havana, designated as a biosphere reserve by UNESCO in 1984. At the base, it was created to offer better living conditions to the farmers of the region. You can discover a village of about 1000 inhabitants surrounded by a replanted forest of 5000 hectares, which can be visited by walking or riding trails.