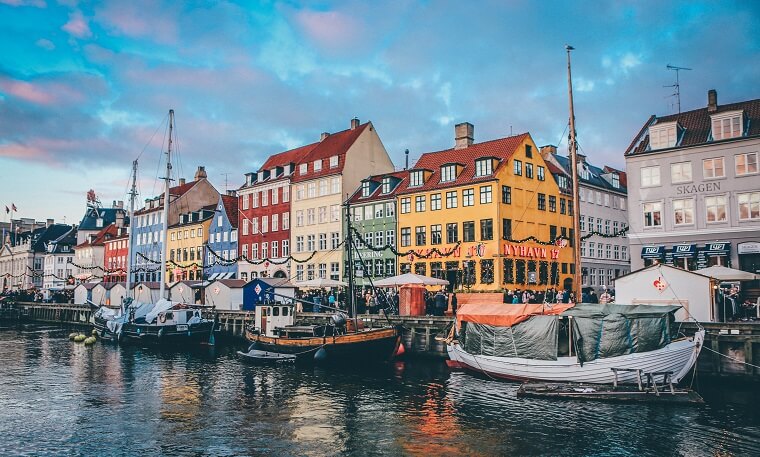 WHAT TO DO IN COPENHAGEN (DENMARK🇩🇰)?

Built on two islands and criss-crossed by canals, Copenhagen is a very quiet and relaxed metropolis, but also very modern, where buildings at the forefront of contemporary architecture meet royal palaces and gardens. The city is very safe, and it’s a good destination where you can come with your children.

Copenhagen has a relaxing atmosphere and it’s one of the most pleasant capitals in the world. It’s nevertheless rich in museums, castles and palaces, but also very green and with lively shopping streets and a fun nightlife.

Even if the city is easy to discover on foot and by bike, to get a first glimpse of the city, it’s a good idea to take the double-decker Hop On Hop Off bus which allows you to get on and off according to your desires and the places you want to visit.

How long to stay in Copenhagen? The ideal is to spend two or even three days on site, to explore the city and its surroundings.

When to go to Copenhagen? The best time to visit Copenghague is in spring and summer, when the weather is mild and there are festivals in the parks and gardens, and you can reach the beautiful beaches around simply by a short train ride.

Is Copenhagen expensive? Yes! the cost of life in the Danish capital is quite high, and it’s one of the most expensive cities in the world. Plan a substantial budget! Fortunately, there are many things to do for free. If you have a very small budget to travel, it is better to cook yourself rather than go to restaurants, and stay in an Airbnb (here’s a good discount for your first night with Airbnb).

Don’t forget to book your first night in Copenhagen NOW on Booking.com

Here are 18 best things to do and see during a trip to Copenhagen:

Renting a bike will therefore be the first thing to do when you arrive because it is the best way to visit Copenhagen. During my weekend in Copenhagen I used Donkey Republic, an application that allows you to rent bicycles in certain parts of the city that you unlock using the Bluetooth of your phone. We choose the time and place where we will pick up the bike and then where we will drop it off when we finish using it. Donkey Republic bikes are orange and easy to spot from a distance. Just remember to have enough battery in your phone!

You will also find many bike rental shops but with Donkey Republic, no need to fill out paperwork, it is really easy to use and not too expensive (around 12€ for 24 hours). Be careful, the rules of cycling are strict and you shouldn’t do just anything you want. There are also pedestrian areas where it is absolutely necessary to get out of the saddle, the Danish police won’t be nice with you otherwise! 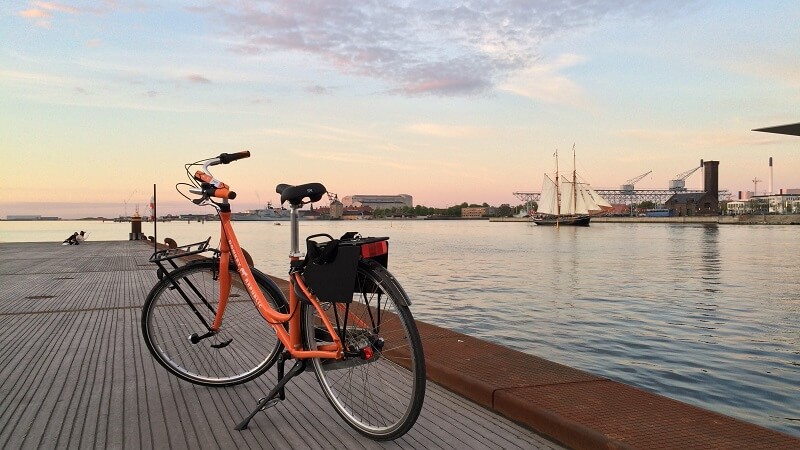 PapirØen is an island on the east coast of the port of Copenhagen, not far from the opera house and just opposite the Royal Theatre (Skuespilhuset). Since 2014, one of PapirØen’s warehouses has been home to Copenhagen Street Food, a set of streed-food stands of all types: Mexican, Korean, Thai, Italian, vegetarian… it’s a really nice place where to eat. You’ll find a list of all stands and opening hours on the official website. 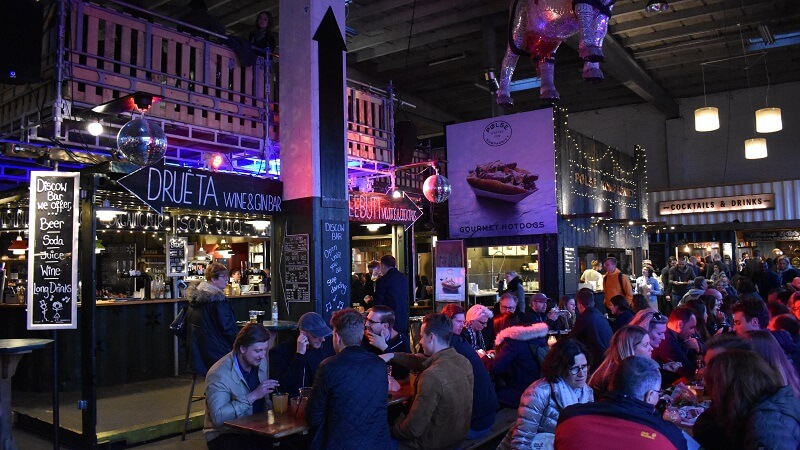 The former Copenhagen Stock Exchange (Børsen) is unfortunately not open to the public, but the building is worth a look for its stunning architecture, with its 56-metre high twisted spire and four dragon tails that were once Copenhagen’s emblem. Built between 1619 and 1640 on the orders of Christian IV, it was not a place where people invested in the financial markets like a current stock exchange, but where they exchanged goods. It’s the oldest stock exchange in Europe and one of the oldest buildings in Copenhagen (now the Chamber of Commerce). 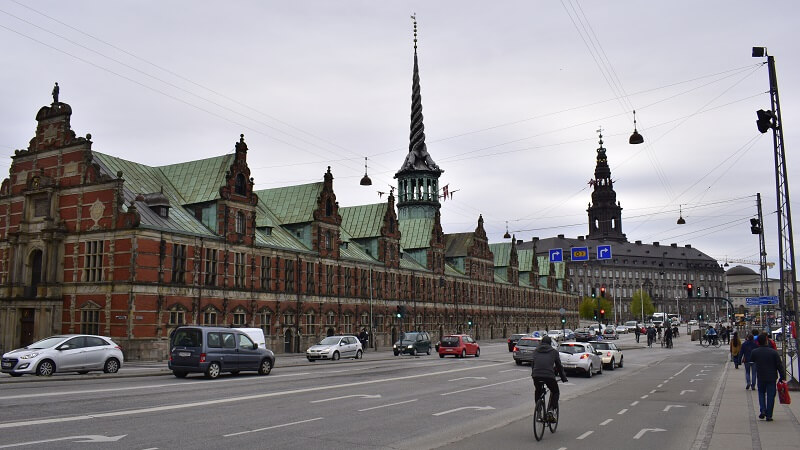 Located not far from the centre, Copenhagen’s beautiful botanical garden is home to many rare plant and tree species. You can also visit a huge tropical greenhouse dating from the 17th century which contains gigantic plants: climb to the top of the greenhouse, you will see how stifling the heat is there! It is also a great place to come for a picnic in a peaceful setting. Admission is free. 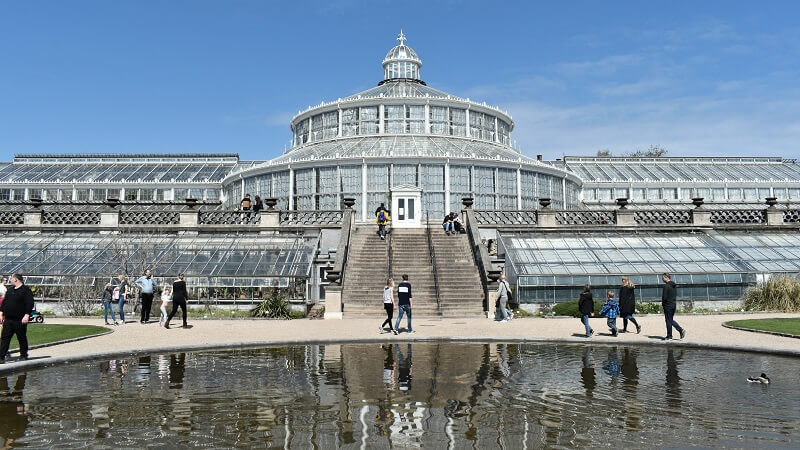 Located next to the botanical garden in a vast park called the King’s Garden (Kongens Have), Rosenborg Castle was built at the beginning of the 17th century and was used as a royal residence until 1710. It can be visited: there is a museum that deals with its history and various collections of objects, in particular the jewels of the Danish crown. Admission is charged, but access to the king’s garden is free. 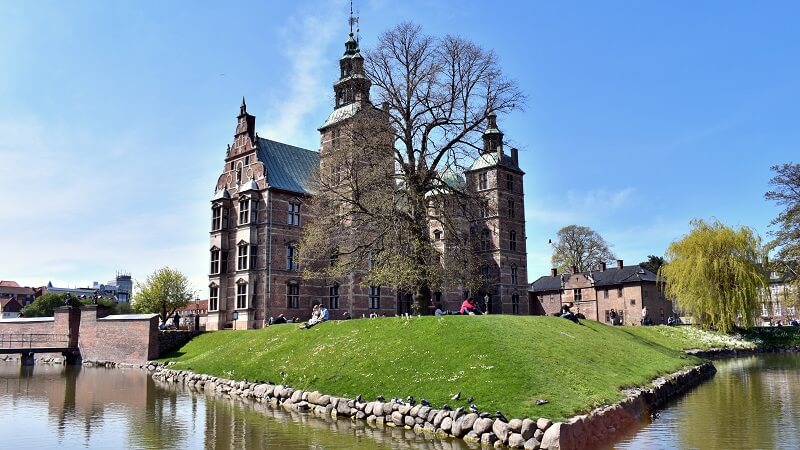 6. THE SQUARE OF THE TOWN HALL

Called Rådhuspladsen in Danish, it’s a huge square located in the heart of Copenhagen’s historic city centre and facing the city hall. The square is surrounded by beautiful buildings and statues. The place is very lively and you can see many events. It’s also the starting point for the main shopping street in the Danish capital, the Strøget. 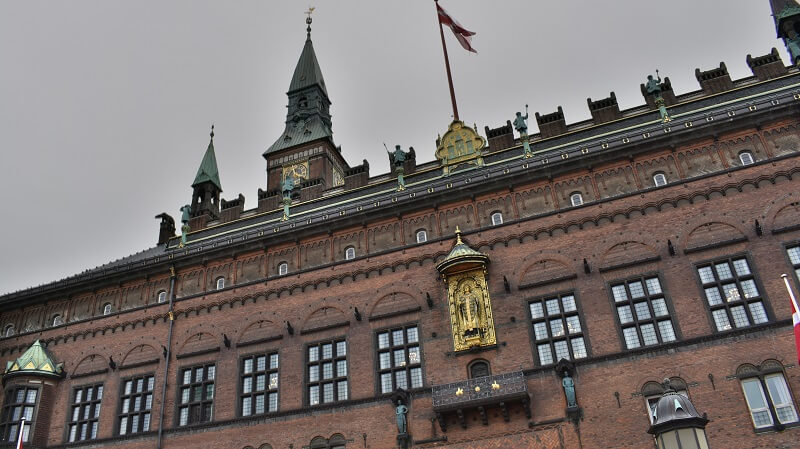 One of the oldest amusement parks in the world, located in the heart of Copenhagen’s city centre, which may seem strange… in the evening, you can see superb illuminations. There are also many cafés and restaurants. Be careful, the entrance is charged and then you have to pay for each ride, there are about twenty of them. Nice to do if you have children with you. 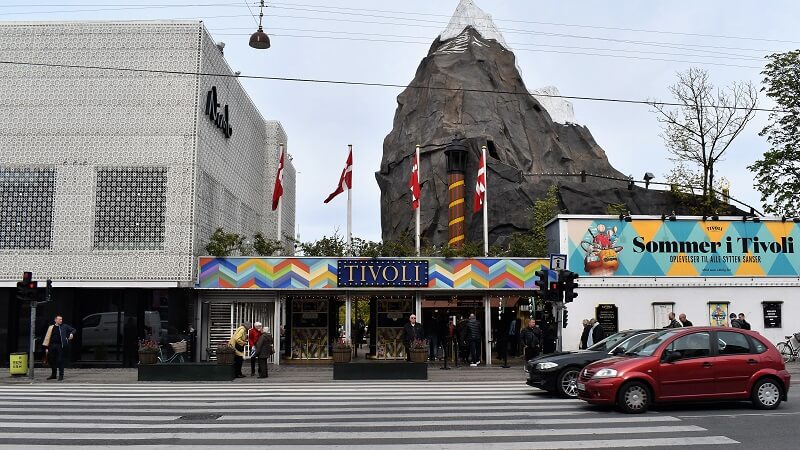 The ‘new’ port of Copenhagen is the must-see tourist spot where you can take the classic picture of Copenhagen with the pretty colourful buildings along the canal, which remind you a little of Honfleur in Normandy. We don’t spend hours there but it’s a nice place to walk (not to eat though, it’s very touristy!). From there you can take a boat for an excursion. 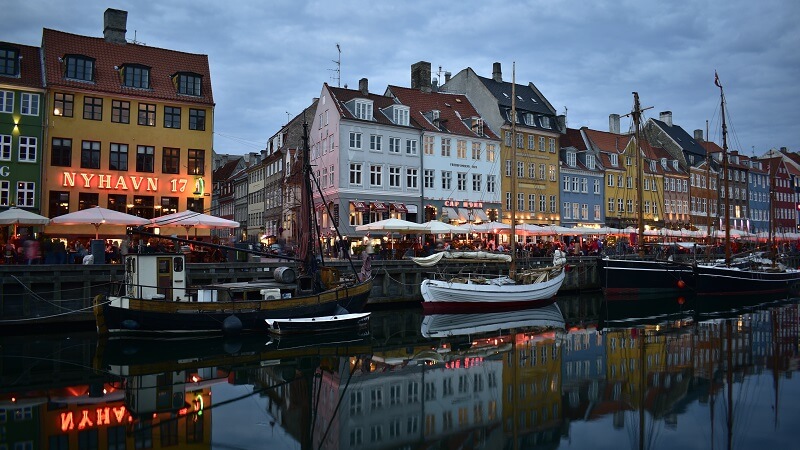 Located on Slotsholmen Island (the castle island) in central Copenhagen, it houses the seat of the Danish Parliament and the offices of the Prime Minister and the Supreme Court of Denmark. It is also the site of the hearings and receptions of the Heads of State. Access to the top of the tower is free and gives you a great view of Copenhagen. The paid visit allows you to discover the stables, the kitchens, the ruins of the old buildings, and the richly decorated rooms of the palace. 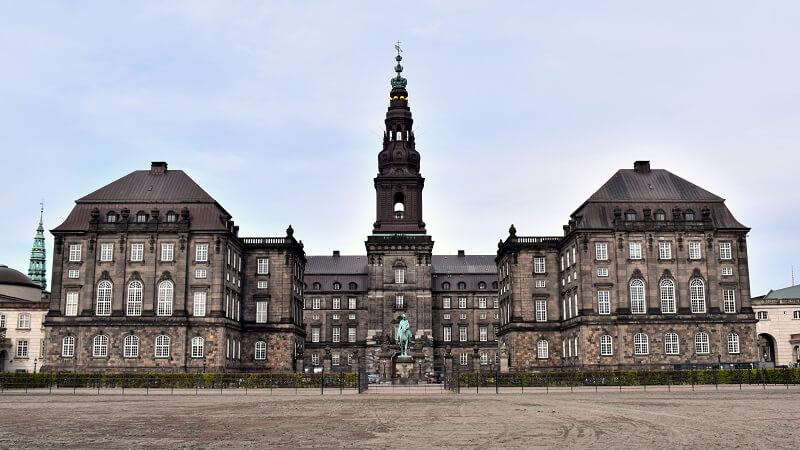 10. CHURCH OF OUR SAVIOUR

One of Copenhagen’s most famous religious monuments. Located in the Christianshavn district, it can be seen from afar with its 90-metre high golden spiral arrow. An outside staircase leads to the top and offers a superb view of the Danish capital. 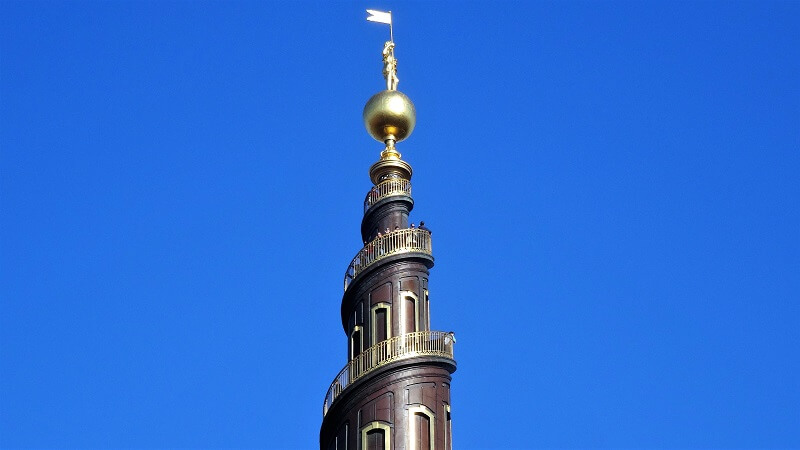 Freetown Christiana is a controversial neighborhood founded in 1971 on the grounds of an abandoned barracks, and self-proclaimed ‘Free City of Christiania‘ by a group of hippies and squatters. It operates as a self-managed community, with its own currency and about 100 residents. You can walk around freely, but it is forbidden to take pictures. Small stands sell joints and space cookies, and we meet a lot of people who smoke cannabis quietly… The atmosphere is quite strange. You’ll either love it or hate it, but it’s still a unusual thing to see in Copenhagene, if only for the small artist studios located all around which are really cool. 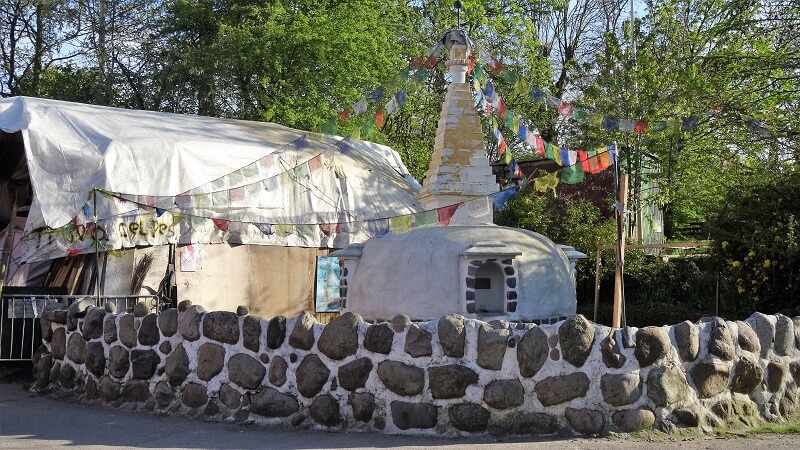 A strange name which is by definition a museum dedicated to stone and sculpture (thank you, Wikipedia!): the Ny Carlsberg Glyptothek contains the ancient works of art collected by Carl Jacobsen, the son of the founder of the Carlsberg brewery. It features treasures from ancient Egypt, Rome and Greece, as well as French and Danish sculptures and paintings. The building itself is beautiful. 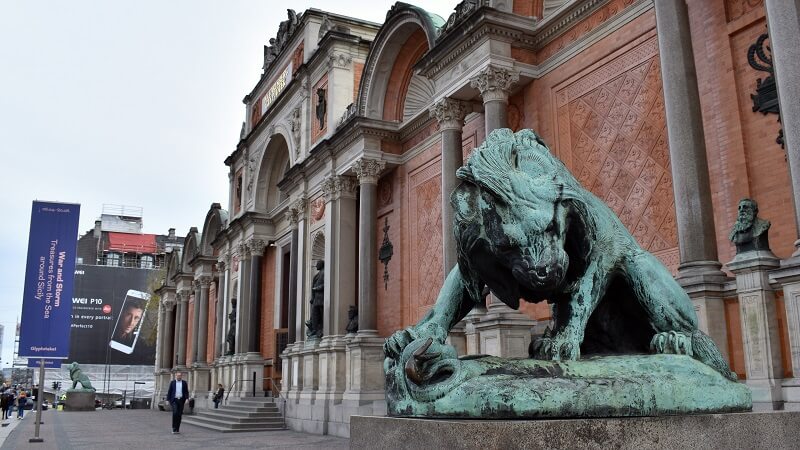 13. THE STATUE OF THE LITTLE MERMAID

The symbol of Copenhagen: a bronze statue rather surprising for its small size (1.25m), based on the tale of Hans Christian Andersen. You just take a picture and go look elsewhere… For the anecdote, the statue was beheaded several times! To be seen nearby is the Kastellet citadel, a military barracks surrounded by moats and used as a park. 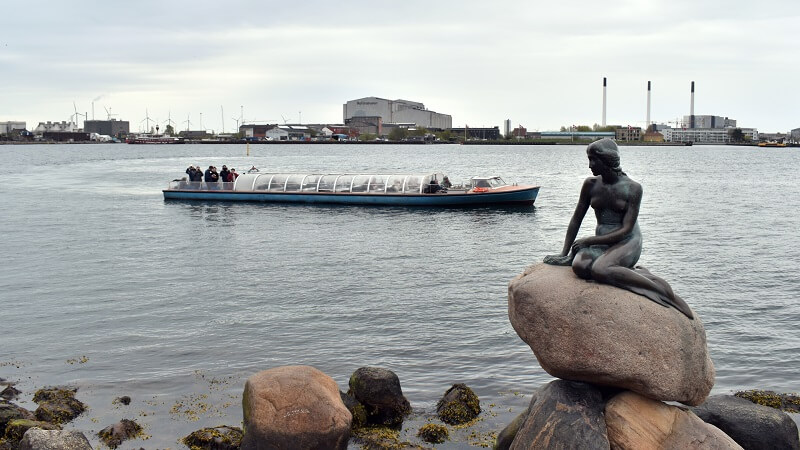 Located in the former royal residence, it’s one of the most important museums in Denmark. Quite complete, it is composed of several specialized departments: archaeology, prehistory, natural science, ethnography, numismatics… Plan several hours of visits! Viking objects and Egyptian mummies can be seen there. It houses some temporary exhibitions. 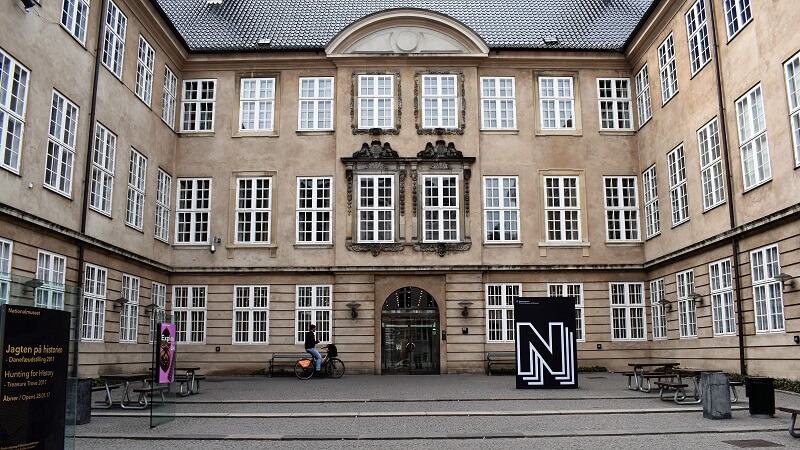 Located in the heart of the city, it’s called Rundetårn in Danish: it’s an old 34-metre high tower built between 1637 and 1642 by order of King Christian IV, which was once used as an astronomical observatory, church and university library. There are no stairs here: the summit is reached by a 209-metre long spiral corridor, which leads to a terrace where you can enjoy a 360° view of the whole city. 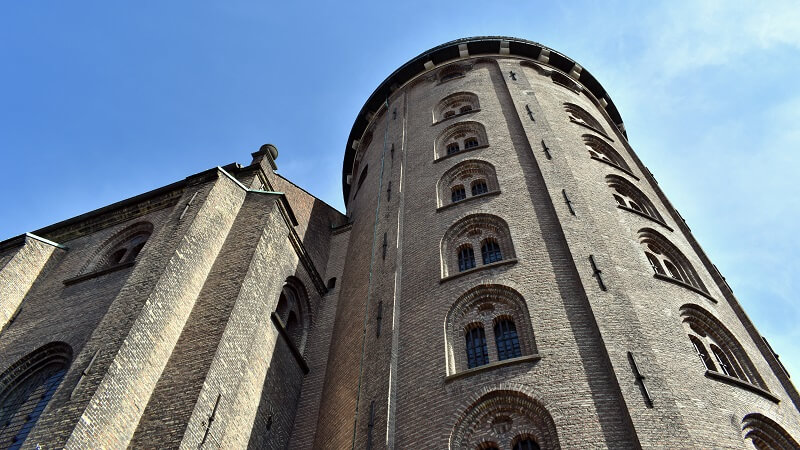 A superb rather massive building, the Marble Church (that’s its name in Danish) has a dome 31 meters in diameter. Designed in 1740, it was not completed until 1894. Admission is free. In summer, you can access the dome, but it is better not to get dizzy. The Marmorkirken church is located just next to the new royal apartments, on the beautiful square of the Amalienborg Palace where you can see the equestrian statue of Frederick V.

Also known as SMK (‘Statens Museum for Kunst’ in Danish), the Copenhagen Museum of Fine Arts is located next to the Botanical Garden and Rosenborg Castle. Shared between two interconnected buildings, it presents a fantastic collection of Danish works (paintings, sculptures and drawings) but also some French canvases. There is also a section dedicated to contemporary art. Admission is charged.

If you are in the city centre and looking for a place to eat, you will find your happiness here. The place is first and foremost a covered market with two large glass halls, but there are also international kitchen stands: it’s the perfect place to have breakfast and enjoy a smorebord (a typical Danish sandwich).

BEFORE YOU GO TO COPENHAGEN

MORE THINGS TO DO AND SEE IN COPENHAGEN

THE BEST PLACES TO SEE IN COPENHAGEN ON GOOGLE MAP