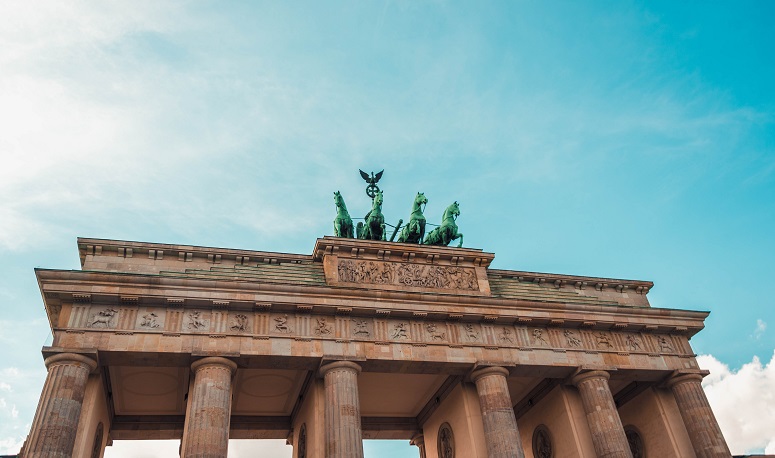 What are the best things to do in Berlin (Germany 🇩🇪)?

City with a symbolic importance during the 20th century, Berlin is the capital and biggest city in Germany. It’s also the second largest city in Europe after London, with a population of 3.4 million people, and a popular destination for tourists.

Founded in the thirteenth century, completely destroy at the end of WWII, the city was divided in two by the Berlin Wall from 1945 to 1989. It became Germany’s capital again in 1990, after the reunification of the two sides. The German capital is now looking to the future, and beyond its tumultuous past there is a lot to discover, an impressive number of museums and emblematic landmarks and monuments to visit, lots of green spaces, and (one of) the best nightlife in Europe.

Where is Berlin? The city is quite isolated, in the northeast of Germany, and just 70 km from the Polish border.

How to get around Berlin? The city is huge and you may quickly become exhausted if you decide to walk. Do not neglect transport times either, especially if you only have a short period of time. A bicycle will be very useful to discover the city. In winter, you’ll have to use public transports. If you only have a short time in Berlin, another solution is the Hop-on Hop-off Bus, which take you to the main places to see in Berlin, with explanations about the monuments, architecture and history of the city.

How long to stay in Berlin? You can see the essentials in one weekend, but the longer you stay, the more the list of things you want to visit will grow. Most museums are closed on Mondays, so plan your stay accordingly. Ideally, it’s best to stay 3 or 4 days in Berlin.

When to go to Berlin? The ideal is to visit Berlin in the summer, or from spring to early autumn, when the temperatures are the mildest. In winter, the city is a little less lively but it has a special atmosphere with the end of the year holidays (the city is often snow-covered) and you’ll be fine as long as you bring warm clothes… May, June and September are great months to visit Berlin.

Where to stay in Berlin? There are many nice areas to stay in Berlin, but the ideal is to stay close to a metro station. I recommend three districts: the Mitte (the historical centre), Friedrichshain (for nightlife), and Prenzlauer Berg (quieter).

Book your first night in Berlin on Booking.com. Let the adventure begin!

What to do in Berlin? Here are the 10 best things to do and see in Berlin:

1. The Brandenburg Gate and Pariser Platz

The Pariser Platz, where the victorious troops marched, takes its current name in 1814, in memory of the occupation of Paris and the overthrow of Napoleon I. Today it houses prestigious buildings: the embassies of France and the United States, the Academy of Arts, the Hotel Adlon, the Brandenburg Gate…
The latter, inspired by the architecture of ancient Greece, was built in 1791 to the glory of Emperor Frederick Wilhelm II of Prussia. It was incorporated into the Berlin Wall in 1961 and is now the symbol of a unified Germany.

It has been the seat of the German Parliament since 1999 and was built in 1894, thanks to war compensation paid by France after 1871. The glass dome, added to the palace during its reconstruction in 1999, is located just above the plenary chamber of the Parliament. It houses a gallery, where photos relating the history of the Parliament are displayed, and from which the summit can be accessed, offering a panoramic view of many Berlin sites. The visit of the dome is free, but it is necessary to book! 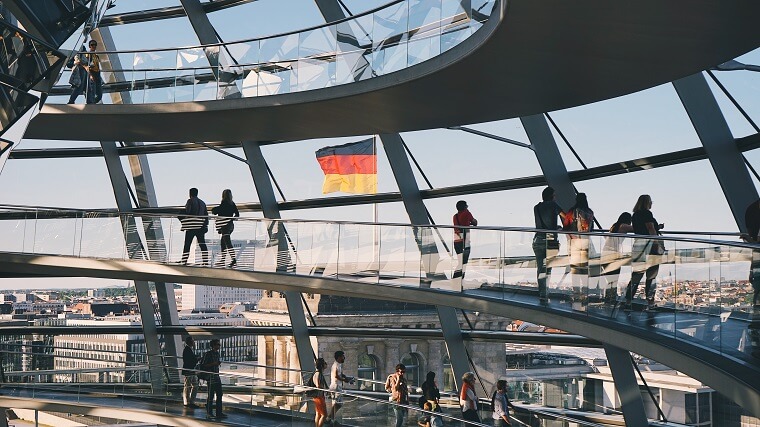 A must-see place in Berlin, this historic place in the heart of the capital offers a glimpse of the last section of the Berlin Wall still preserved in its entirety at its original location. The remains, period photos, videos and explanatory panels provide a better understanding of the history of the partition of Germany, which was divided from 1961 to 1989. The visit is free of charge.

4. Charlottenburg Castle and its park

Commissioned by Frederick I of Prussia in honour of his wife at the end of the 17th century, this baroque palace is composed of two parts: the former castle (Altes Schloss) with its Porcelain cabinet, and the new wing with the apartments of Emperors Frederick the Great and Frederick Wilhelm II. Admission is free for those under 18 years of age. The castle park, in baroque style, is also a must. You can come for free to walk, sunbathe, play, sled and discover many curiosities.

It has been the subject of a major renovation programme and was listed as a UNESCO World Heritage Site in 1999. It houses five museums with exceptional archaeological and artistic collections, such as the Pergamon Museum and the Neues Museum. Located nearby, Berlin’s cathedral (Berliner Dom) is topped by a dome, at the top of which there is a magnificent view of the city centre. Its white marble altar and yellow onyx, its pneumatically driven organ and its basements, where 90 members of the Hohenzollern dynasty rest, make it a curiosity of the capital.
Free admission for those under 18 years old. 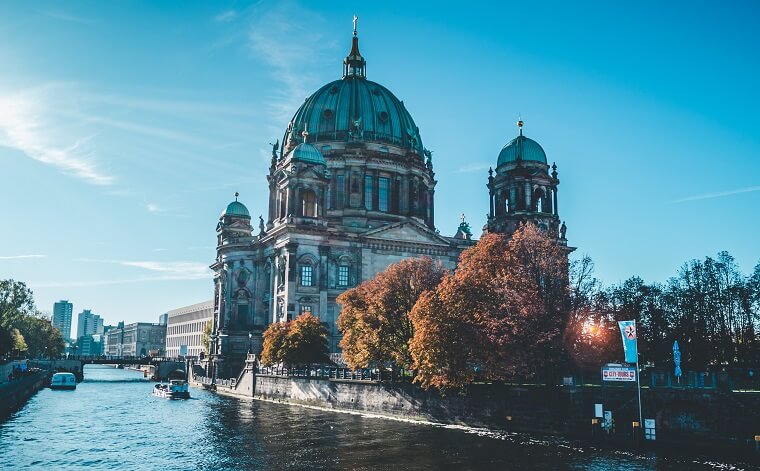 This museum is housed in a former Prussian arsenal, the Zeughaus, the oldest building (300 years old) on the avenue “Unter den Linden”. With 8,000 exhibits (paintings, documents, furniture) covering nearly 8,000 m2, it traces more than 2,000 years of German political and social history. In addition to the permanent exhibition, the museum offers temporary exhibitions in its new wing, a spacious four-storey building with a glass and steel reception hall, designed by the architect of the Louvre pyramid. Admission is free for those under 18 years of age.

Potsdamer Platz, the former centre of Berlin, is now one of its most modern districts. It shows Europe’s first manually operated traffic light, some remains of the Grand Hotel Esplanade and the Haus Huth, the only building that resisted the bombardments of the Second World War. Nearby you will find the Sony Center, with its huge glass and steel dome lit by lamps that change colour, and the Kulturforum, a collection of cultural sites, such as the Painting Gallery (Gemäldegalerie) which presents a collection of European works and remains from both parts of the city. Free admission for those under 18 years old. 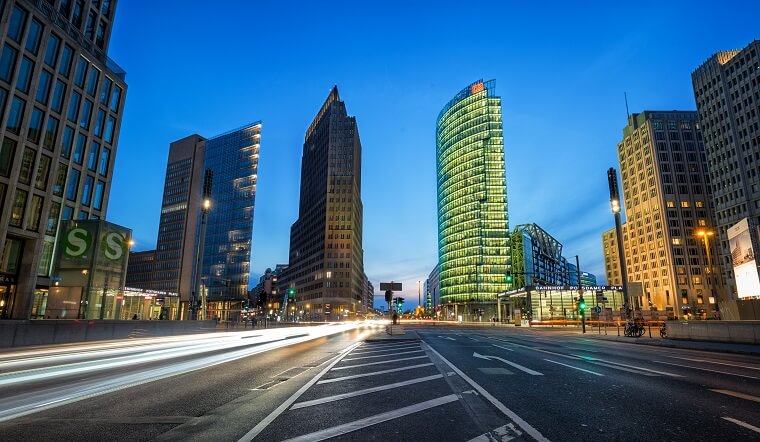 This 12th century square was intended to house the king’s close guard (the people in arms). On either side were built two identical baroque churches: the Französischer Dom in the north, for the French Huguenots who came to settle after the revocation of the Edict of Nantes, and the Deutscher Dom in the south, for German Protestants. The latter, damaged during the Second World War, became an artistic centre in 1980, then a museum of the history of German democracy. Between the two buildings is the Konzerthaus, the headquarters of the Berlin Symphony Orchestra.

Located in the Ministry of State Security of the former East Germany, this prison became the Hohenschönhausen Memorial in 1994, an independent public foundation. One can discover cells, the description of the interrogations and violence inflicted on the many political prisoners incarcerated within its walls. The visit, which is best booked, is only possible with a guide, usually a former detainee. The entrance fee varies from 3 to 6 euros.

10. Sanssouci Palace and its park

Located in Potsdam, 30 minutes by train from Berlin, this rococo palace, called the “Prussian Versailles”, was the summer residence of King Frederick the Great, who invited relatives, such as Voltaire, to relax there, free from etiquette and royal constraints. He even decided to be buried there. It is a UNESCO World Heritage Site as well as its vast French-style park, home to many curiosities: fountains, statues, mill, orangery, Chinese pagoda, New Palace… The entrance fee varies from 8 to 12 euros.

OTHER THINGS TO SEE IN OR NEAR BERLIN

If you have some time in Berlin, here are some other places to visit that are worth a look: 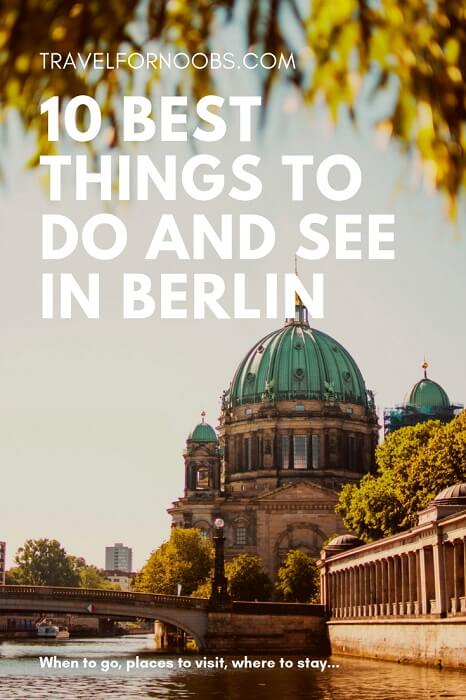