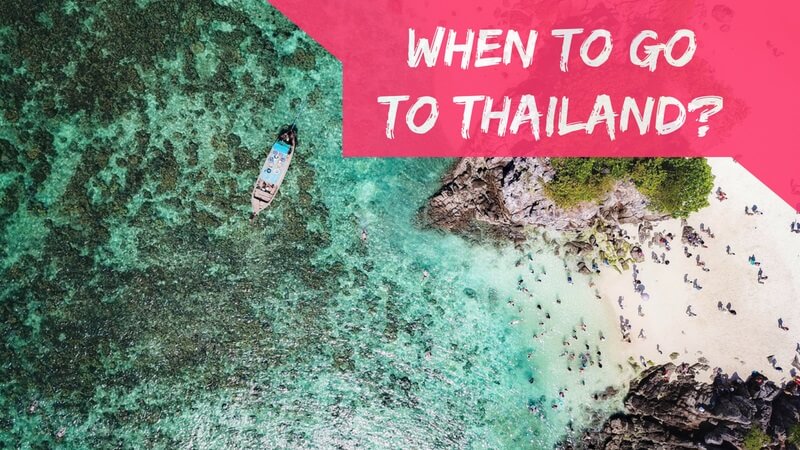 When is the best time to visit Thailand?

A difficult question to answer precisely, because its territory extends over 1770 km from north to south and it also depends on what you want to do there: beach, diving, trekking, temples … The climate of Thailand is tropical, it is hot and humid all year round for any European tourist. In fact, there are three distinct seasons that are determined by the Southwest and Northeast monsoons:

There are some notable differences between the north and south of the country:

The climate in the north

The regions north of Bangkok have a climate clearly marked by the three seasons. Northern Thailand and its uplands are less humid than the south and experience the greatest variation in temperature.

During the cool season (November to February) temperatures range from 26 ° C to 29 ° C, and the climate is mostly dry. The thermometer can go down to 16 ° C in Chiang Mai and graze the zeros degrees in the heights for a few nights. Remember to take a sweater and a warm jacket if you plan to visit this area at this time. During the dry season (between March and May) the north is warmer than the central plains. Finally, from May to November, the precipitation is more important in the north because it is the southwest monsoon.

The climate in the south

Be careful, they do not take place at the same time on the east and west coast of the peninsula! On the west coast (towards Phuket, therefore), the southwest monsoon brings rain and often heavy thunderstorms from April to October, while on the east coast (near Koh Samui) most of the rainfall fall between September and December. Choose carrefuly the time to go!

The rainy season (May to October)

The rainy season (or monsoon) from May to October is the least predictable of the three seasons, as it varies in length and intensity from year to year. Be careful, it does not rain continuously 24 hours a day: it rains almost every day, but usually only for a few hours during the afternoon or at night. Average moisture levels are around 90%, with average temperatures around 29 ° C this season. Not very nice…

On the Andaman coast (west) the rainy season is stronger than anywhere else in the country: rainfall can begin in April and often lasts until November. They are at their strongest in September and October: floods can hit the country, traffic is sometimes blocked, and some islands become inaccessible. You may need to change your travel itinerary.

The east coast and its islands suffer less from the monsoon than the Andaman coast. Rain falls between October and January, especially in November.

The cool season (November to February)

After the rainy season, the sky turns blue and the temperatures become more pleasant even if they can reach 30 ° C in the middle of the day. The countryside offers beautiful landscapes, nature is green and lush thanks to the rain. The level of rivers and waterfalls is at the highest, in short it is ideal if you go trekking.

In general, it is the best time to visit Thailand, especially in December and January. It is also the most tourist season, which corresponds to the winter in Europe. Prices are highest and hotels are full, so be sure to plan your reservations well in advance. If you plan to go to Phuket or Koh Samui, the two islands alternate the tourist seasons: the optimal weather on Phuket is between November and April, during this period the island hosts the largest number of tourists.

Conversely, the high season to Koh Samui and the eastern islands goes from February to October, when the weather is most beautiful (in Koh Samui, many rainfall from November to January).

The hot season (March to May)

High temperatures of up to 40 ° C combined with high humidity make the hot season the most unpleasant period to visit Thailand, especially in April. The north-east is particularly affected by the hot season, where the landscape seems completely sun-dried. Better to go to the south of the country at this time.

The best and the worst time to go to Thailand

The best time to visit all of Thailand starts in November until February, when the north-east monsoon blows cool, dry air that gives the heat a break.

During this season, the temperature varies from 18 to 32 ° C in Bangkok, while in the north of the country temperatures can be quite cool especially at high altitude, can even fall below zero.

When should you avoid going to Thailand? If you can not stand the heat and humidity, avoid the hot season from March to June, especially April. During this period, the average temperature in Bangkok is around 34 ° C but can reach 38 ° C. The months of April and May are the hottest around the country and are particularly uncomfortable, so do not plan your trip at this time unless you plan to spend all your days swimming in the sea.

Note that there is a mini-high season in July-August that corresponds to school holidays in Europe, it is mostly families who come to visit Thailand.

When to dive in Thailand

It is possible to dive all year in Thailand, but the best conditions at sea will be from November to April (ideally, from February to April because there will be less tourists). The visibility varies during the year but can go up to 30-35 meters if there are good weather conditions and not too much plankton.

Summary for each month of the climate, weather and temperatures in Thailand as well as the dates of holidays, festivals and holidays. Since many Thai festivities are based on the lunar calendar, there is not necessarily a specific date because they change from year to year. Check out the official Thai Tourism website to see the exact dates of each event.

During holidays and Buddhist holidays, government offices, banks, as well as some restaurants and shops close. Public transport works normally. Thai law prohibits the sale of alcohol in bars during the birthday of the king and queen.

For those who wish to participate in the Full Moon Party, it is held every month (see dates here).

The temperatures indicated in orange are the averages for the city of Bangkok:

JANUARY (27°C/80°F): Perfect weather and the highest of the tourist season. Temperatures between 20 and 30 ° C, very little rain (occasionally in the south). Cool evenings if you go trekking in the north of the country.

Chinese New Year: between mid-January and end of February (for three days). Not an official holiday but it is observed by many Thais of Chinese origin. Many colorful parades with dragons. Shops close on this occasion.

Makha Bucha (late February / early March): one of the most important Buddhist festivals in Thailand, many temple celebrations.

MARCH (30°C/86°F): Temperatures continue to rise and the heat becomes unpleasant. Avoid the north of the country, a lot of smoke because the farmers burn their fields (very unpleasant for the lungs and photos).

APRIL (31°C/87,8°F): Worst month of the year: dreadfully hot, avoid Bangkok and the center of the country. The Songkran festival in mid-April allows you to cool off a bit. Clim ‘compulsory! Chiang Mai is also uncomfortable because of the smoke.

MAY (30°C/86°F): Beginning of the rainy season, showers almost every day. With the heat, the humidity becomes very unpleasant. Risks of floods in Bangkok. hotel prices are at their lowest.

Visakha Bucha (May full moon): one of the most important festivals for Buddhists.

JUNE (30°C/86°F): Temperatures similar to May, just a little less rain. The landscape is green again in the countryside. Avoid Ko Chang (rain every day). Go instead to Koh Samui and Koh Tao if you want to visit the islands. Hot and humid in Chiang Mai.

Phi Ta Khon Festival at Dan Sai (in the region of Isan): parades, disguise as ghosts …

AUGUST (30°C/86°F): Always rain, risk of flooding in Bangkok. Highest monsoon in the north and northeast of the country. Temperatures as in July. Avoid Ko Chang and the surrounding area.

Anniversary of Queen Sirikit and Mother’s Day (August 12): the streets are decorated in honor of the Queen, especially in Bangkok to Ratchadamnoen Avenue and around the Grand Palace.

SEPTEMBER (29°C/84,2°F):The weather is starting to improve, the temperatures are falling and it’s raining less and less (except in Bangkok). Pleasant weather in the gulf islands, except on the west coast (to Phuket) where it is the rainiest month.

OCTOBER (29°C/84,2°F):Ideal time to visit the north and northeast of the country. Rain in the gulf islands (Ko Tao to avoid) and on the west coast.

October 23: anniversary of the death of King Chulalongkorn (Rama V)

October 29-31: Halloween, party at Khao San Road and some bars / clubs in Bangkok

NOVEMBER (28°C/82,4°F):End of the monsoon almost everywhere in the country. Pleasant temperatures. If you trek to Chiang Mai, it’s getting cold at night. Ideal time to visit the north-east of Thailand. Focus on the west coast rather than the gulf islands (less rain).

Loy Krathong (early November): one of the most beautiful festivals in Thailand, especially in Sukhothai and Chiang Mai. Throughout the country the Thais float small boats made of banana leaves adorned with candles and fly lanterns at night.

Festival and parade of elephants in Surin (3rd weekend of November)

Anniversary of King Bhumibol and Father’s Day (holiday, December 5). Decorations and illuminations to the Grand Palace in Bangkok. Celebrations to Sanam Luang Square.

Before you go (useful links)