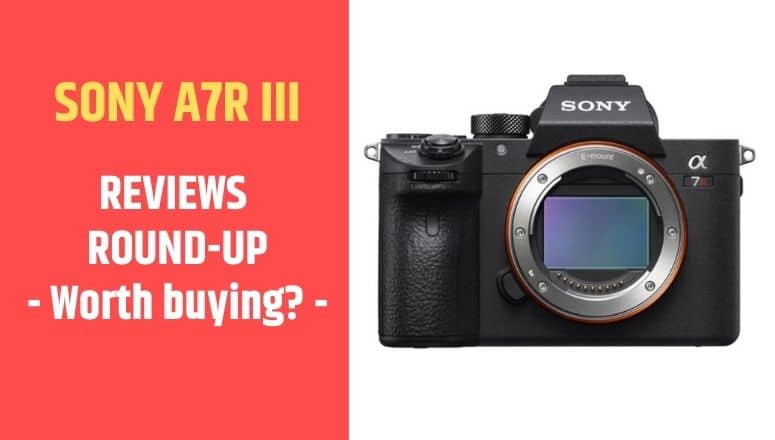 Reviews roundup – Sony A7R III : Should you buy it?

Here’s a roundup of all the Sony A7RIII reviews, ratings and impressions from the web. Discover its strengths and weaknesses here!

The camera can shoot in RAW and JPG format, bursting at up to 10fps in continuous mode.

It shoots videos in 4K at up to 30 fps. The a7r III utilizes a dual SD card slot, one UHS-I compatible, the other one UHS-II compatible. Its battery can last between 530 and 640 shots per charge. Wi-Fi and NFC connections allow for remote control operations and files downloading. The camera body weighs 675g with its battery and SD cards included.

So what do the critics think of the Sony A7R III?

Overall most reviews say that the Sony a7r III is a solid successor to the a7r II. The camera has a massive full frame sensor and delivers a great quality for pictures, even in low light settings. The video mode is also interesting even though the 30fps in 4K is a bit limiting. The camera is strongly built in magnesium alloy, and adopts a good DSLR-style of handling.

The stabilization is solid, and the autofocus is doing a great job despite some flaws in movement tracking. The battery is a massive improvement compared to previous models. Like its predecessors, the control dials can be hard to reach, and the small size makes it awkward to handle with big lenses.

For more infos about the positive and negatives sides of the Sony A7R III, check out the selection of reviews below:

The Sony A7R III is one of the best rated cameras on the web :

Cameralabs.com ★★★★½ (Highly recommended) – ‘On the whole, shooting with the A7r Mark III is an overwhelmingly positive and impressive experience that will satisfy a broad array of photographers.’

Dpreview.com – 90% (Gold Award) – ‘It’s fair to say that the Sony a7R III is a great option for an incredibly wide variety of photographers. Offering great image quality, fast burst shooting speeds, high quality 4K video and a reasonably compact package, it’s an incredibly well-rounded offering. The endless customization options can be daunting at first, but in the end, it’s a camera equally at home capturing fast action one moment, and expansive landscapes the next.’

Digitalcameraworld.com – ★★★★★ (Recommended) – ‘When it launched in 2017, the Sony A7R III was unrivaled in its power and versatility. However, even though the market has caught up with its specs, it remains a powerhouse to this day, with near-medium format resolution packed into a sleek, stabilized body. Indeed, unless you REALLY need the 61MP sensor, the A7R III might be a much wiser purchase than the A7R IV – and it certainly comes with a much more appealing price tag.’

Ephotozine.com – ★★★★½  (Highly recommended) – ‘The Sony Alpha A7R Mark III does practically everything you could possibly want, and does it extremely well.’

Photographyblog.com – ★★★★★ (Essential) – ‘The A7R III is the most well-balanced Sony camera to date, offering a compelling mix of resolution, speed and size that also makes it one of the best cameras that we’ve ever reviewed, be that mirrorless or DSLR. ‘

Trustedreviews.com – ★★★★★ (Highly recommended) – ‘Quite simply, the Sony A7R III is a ludicrously brilliant camera, and one of the very best on the market.’

Techradar.com – ★★★★★ (Editor’s choice) – ‘The Sony Alpha A7R III is not only the most well-rounded mirrorless camera you can buy today, but one of the best cameras out there right now.’

1 thought on “Sony A7R III reviews roundup: all the scores”