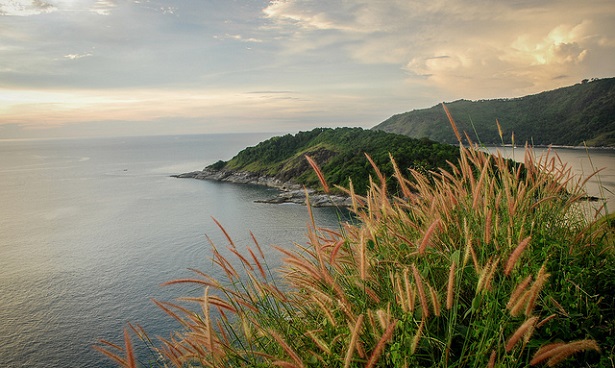 WHAT ARE THE BEST THINGS TO DO AND SEE IN PHUKET?

It is the largest of Thailand’s islands and one of the most visited destinations, as it is the main gateway to visit the south of the country. The main attraction of Phuket is of course its beaches but there are also many activities to do: excursions to the surrounding islands, diving or snorkelling trips, taking cooking or Thai massage lessons…

The largest city on the island is Phuket Town, but if you want to enjoy the beaches the ideal place is Patong, on the west coast.

When to go to Phuket? The high season is between January and February and during this period, there are a lot of people and the beaches are overcrowded. May to October is the rainy season, but there are obviously fewer people on the beaches and hotel room prices are lower. It may rain in the late afternoon or early evening, but the days are usually sunny. More information here.

Here are 10 things to see and do on a trip to Phuket:

The number one reason why Phuket attracts so many people is because of its beaches. You can simply admire the landscape or do activities such as snorkelling, walking or swimming… The most beautiful beaches of Phuket are on the west coast of the island: there are from North to South Karon Beach, Kata beach, the neighbouring beach a little further south Kata Noi, and at the southern tip of Phuket the beach of Nai Han (or Nai Harn)

A must-see site, this bay of a hundred islands offers one of the most beautiful landscapes in southern Thailand, similar to Halong Bay in Vietnam. It can be explored by kayak in caves and lagoons with an emerald green colour, admiring karst peaks that emerge from the emerald water. There is also James Bond Island, which was used as the setting for ‘The Man with the Golden Gun’. 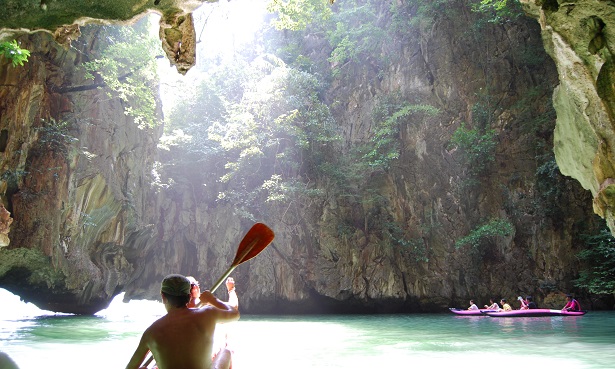 3 – Diving in the Similan Islands

For diving enthusiasts, it is possible to access the Similan Islands from Phuket. They are located about 100 kilometers northwest of Phuket and are renowned for their exceptional diving spots, accessible to both beginners and advanced divers. If you do not dive, it is also possible to snorkel. A little further north, near the Surin Islands, is Richelieu Rock, which is also a very popular diving spot (manta rays and whale sharks!). 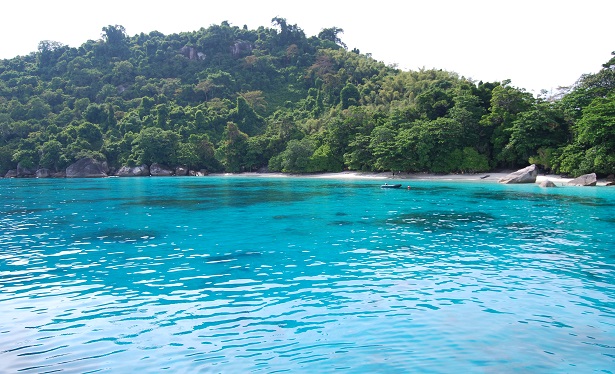 With its vestiges of Sino-Portuguese colonial architecture and its elegant Chinese houses dating from the early 20th century, walking around the old town district gives you a glimpse of what Phuket was once like, with its Chinese herbalists’ shops, old hotels, local markets and old shops. Not to be missed: the Thai Hua Museum, Soi Rommanee and the old Standard Chartered Bank building. Interesting to see to discover a part of Thailand’s history.

5 – The statue of the great Buddha

This huge statue of Buddha is made of white marble from Burma. It is held at the top of Nakkerd Hill. With its 25 meters high, the statue is visible from anywhere on the Phuket part. This is a religious site, so remember to cover your shoulders and legs if you visit the site (sarongs are provided free of charge for women). Of course, you can simply go there to enjoy the beautiful view.

An archipelago composed of two islands: Ko Phi Phi Phi Don and Ko Phi Phi Leh, 5km away. It is the latter that made the place famous thanks to the success of the film “La Plage” with Leornardo Dicaprio, and it is there that we find May Bay, the site that served as the setting for the film. Despite the number of important tourists, the place remains beautiful and it is certainly one of the most beautiful beaches in the world and one of the reasons why some people come to Phuket. The arrival by boat in Maya Bay is spectacular. 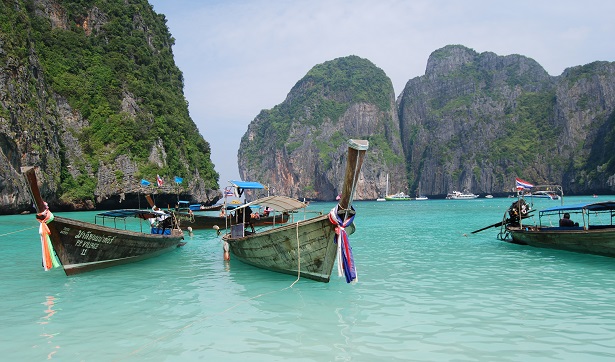 Phuket has many points of view from which to admire the landscape, accessible on foot or by vehicle (be careful if you are on a scooter, the roads are dangerous!). You can admire the magnificent sunsets. One of the most popular spots is Promthep. Also try the viewpoint of Kata-Karon, Radar Hill, or Windmill Viewpoint for superb panoramas.

It is the largest temple in Phuket, and one of the most visited. Built at the beginning of the 19th century, it is very colourful and ornamented with statues of Buddhist and Thai mythology. Its architecture is typical of Thailand. There is a 60-metre high stupa that houses a relic of the Buddha.

A trip to Phuket is also a good opportunity to live new experiences such as bungee jumping, karting, quad biking in the jungle, climbing, paragliding, paramotoring, trekking or even pulling an AK47 at a shooting range for extreme sensations. For those who would like something quieter, we can also go horseback riding on the beach or golf.

This festival takes place during the ninth month of the Chinese lunar calendar. For ten days, the locals follow a strictly vegetarian diet to purify themselves and participate in sacred rituals. Some invoke Gods by walking barefoot on the flames or by mutilating their bodies in a spectacular way, offering an impressive and frightening spectacle to see.