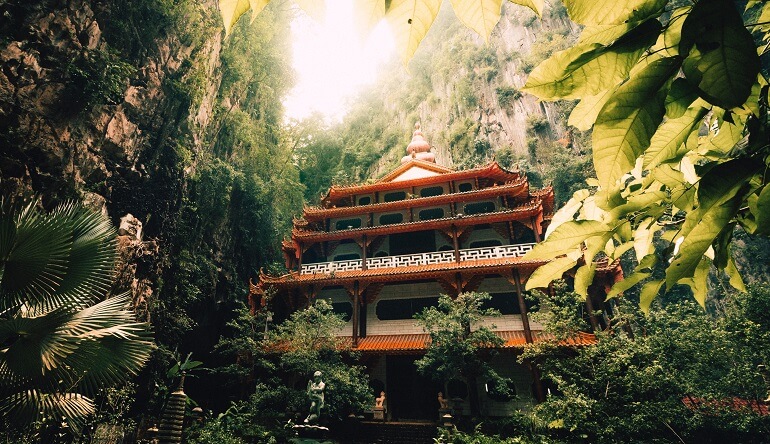 WHAT ARE THE BEST THINGS TO DO IN MALAYSIA?

Malaysia is a destination that offers a great cultural mix, with Malay, Indian, Chinese and British culture. The country also has a wide variety of landscapes, with a primary forest that is one of the oldest in the world, beautiful white sandy beaches, and mountains where trekking is possible. The flora and fauna are exceptional, especially in Borneo, where you can see the rafflesia, the largest flower in the world. The various influences are felt in the architecture but also in the cuisine which is excellent (although sometimes extremely spicy!).

Where is Malaysia? Malaysia is located in Southeast Asia, and consists of two rather remote territories: Peninsular Malaysia, south of the Gulf of Thailand, where the capital Kuala Lumpur is located, and East Malaysia, north of the island of Borneo (shared with Indonesia). The two territories have their own specific characteristics, with quite different tourist sites and activities that you will discover in this article. Malaysia offers a very diverse mix for travellers, where everyone will find the right experience.

When to go to Malaysia? Temperatures vary little throughout the year, with a constantly hot and humid climate, and when you arrive in Malaysia you will be assaulted by a humid and stifling heat. However, the best time to visit Malaysia is outside the monsoon season: avoid the period between November and February on the east coast of the peninsula. On the West Coast, it rains the most between April and October but the showers are temporary and cool the air. The best time to visit Western Malaysia is from March to early October as a whole.

The best time to visit Borneo is from March to mid-September, when better weather conditions can be enjoyed, although there are differences in climate between the Sabah and Sarawak regions, which is fundamentally more humid than Sabah.

Here are the 20 best things to do and see in Malaysia:

A very cosmopolitan modern city that combines Malaysian, Indian and Chinese culture. Don’t miss a visit at the foot of the Petronas towers in the evening. Other things to do and see: the Menara tower, shopping at the central market, Petaling Street (Chinatown) and the bird park. You will find more activities to do in Kuala Lumpur by reading this article: top 20 things to do in Kuala Lumpur

Book your hotel in Kuala Lumpur now on Booking.com 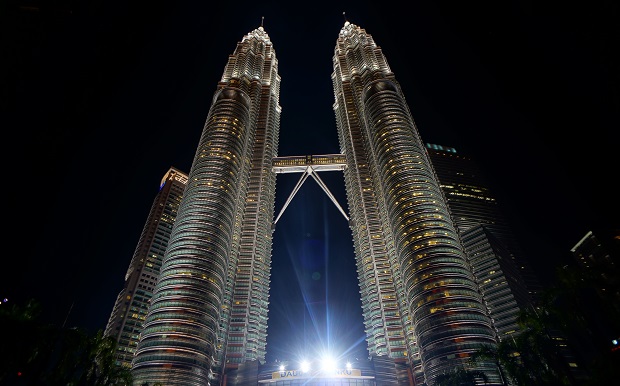 As its population is very multicultural, Malaysian cuisine has many Chinese and Indian influences but also Indonesian and Thai, and offers a wide variety of tastes. Be careful, it can be very spicy! Most Malaysians rarely cook at home but prefer to eat outdoors. It’s up to you to do the same. Kuala Lumpur is a great place to try street food, and there’s also a huge variety of restaurants. 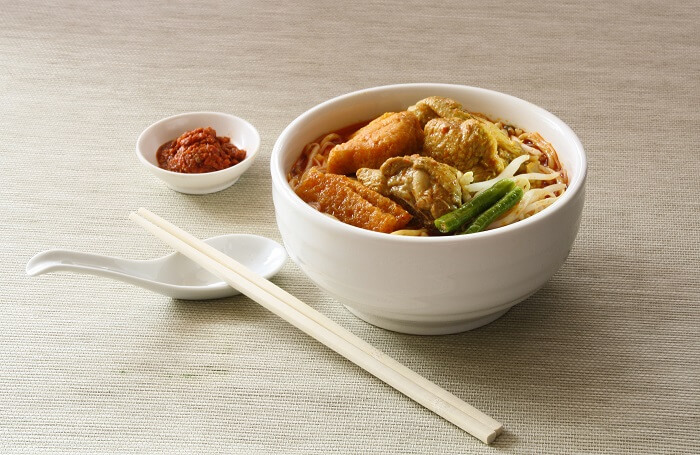 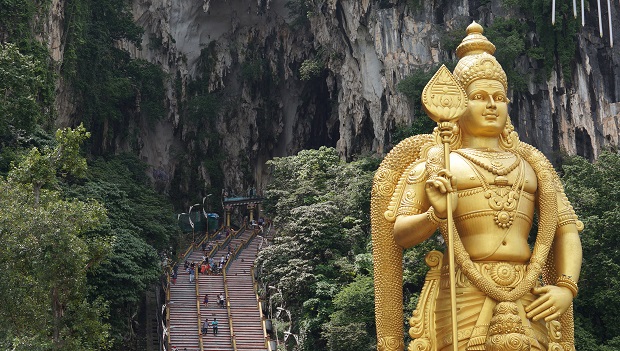 Penang is an island located in the northwest of the Malaysian peninsula, renowned for its Chinese influences and cuisine that attracts many travellers. Visit the historic city of Georgetown, Kek Lok Si Temple and the former British fort Cornwallis.

Book your hotel in Penang now at Booking.com 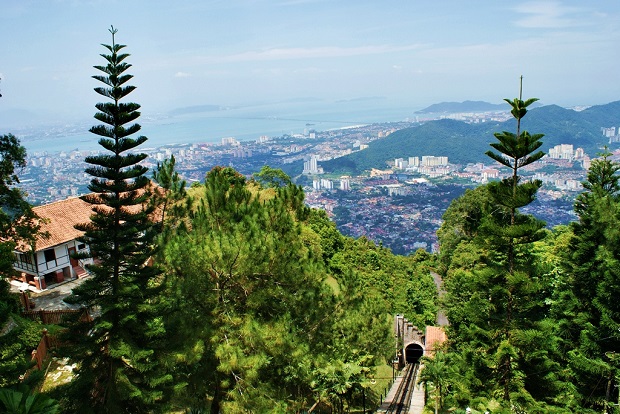 Tioman is an island located on the east coast of the peninsula. You can stay there even on a small budget. It is best known for its scuba diving spots, and it is the ideal place if you want to get your PADI license. The island is relatively undeveloped and the jungle covers a large part of it.

Book your hotel in Tioman now on Booking.com 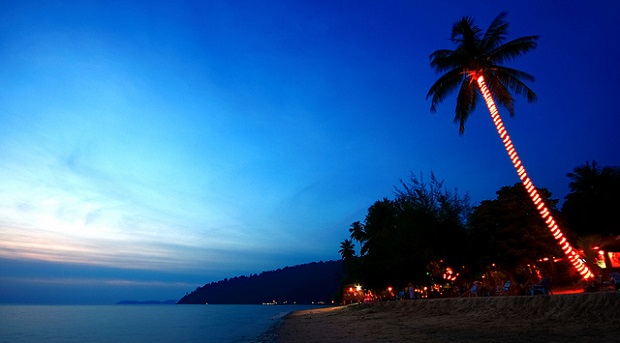 Also known as Malacca, it is the former capital of the Malaysian sultans and was also colonized by the Portuguese, Dutch and British. It’s a few hours drive south of Kuala Lumpur. Its main attraction is its colonial architecture and local cuisine.

Book your hotel in Melaka now at Booking.com 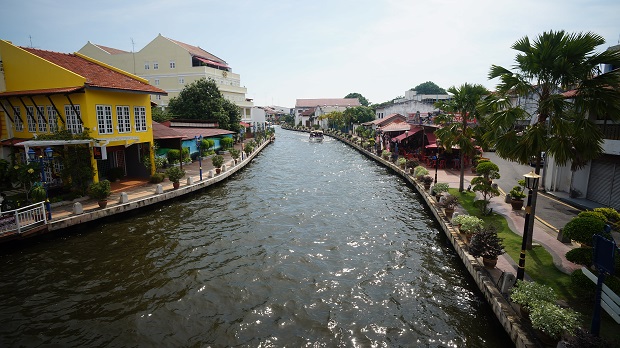 To escape the heat, the former British colonials came to settle in these hills north of Kuala Lumpur and planted tea there. The main attractions are the green panoramas, the walks through the tea plantations and tea tasting. 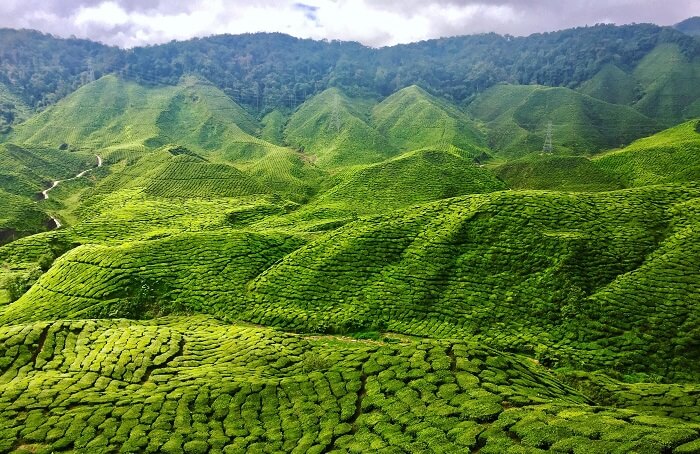 One of the most beautiful national parks in the country, home to one of the oldest rainforests in the world, where you can also climb the highest peak on the Malaysian peninsula, Mount Gunung Tahan. 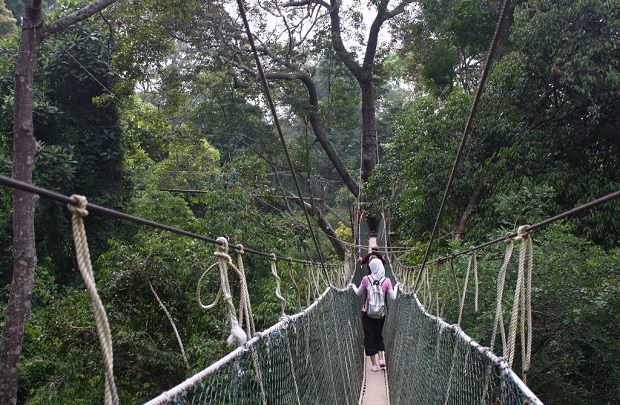 Accessible by ferry, Langkawi is an archipelago of about 100 islands northwest of the Malaysian peninsula, very close to Thailand. There are white sandy beaches, coral reefs, and duty free shopping. 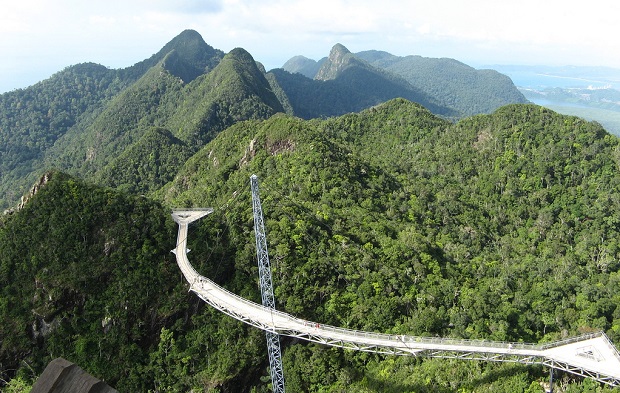 Explore the twin islands of Perhentian Besar and Perhentian Kecil, among the most beautiful islands in Malaysia, with white sandy beaches. They are also very popular for diving or snorkelling.

Book your hotel in the Perhentian Islands now on Booking.com 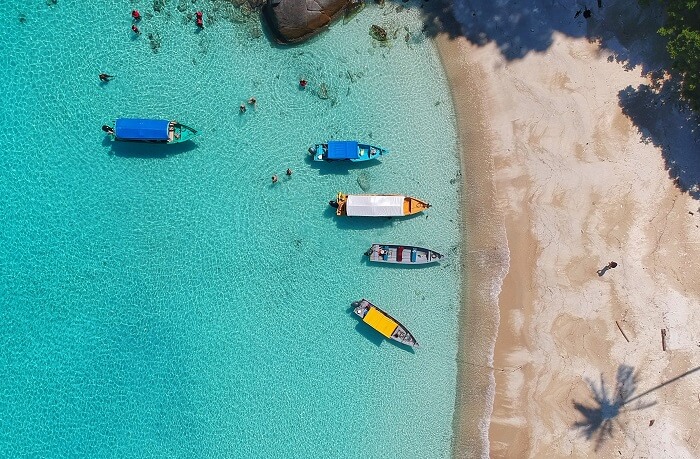 Located not far from the Thai border and on the way to the Perenthian Islands, it’s the ideal place to discover traditional Malaysian culture, with its unique architectural style, cuisine and above all its many museums to visit. 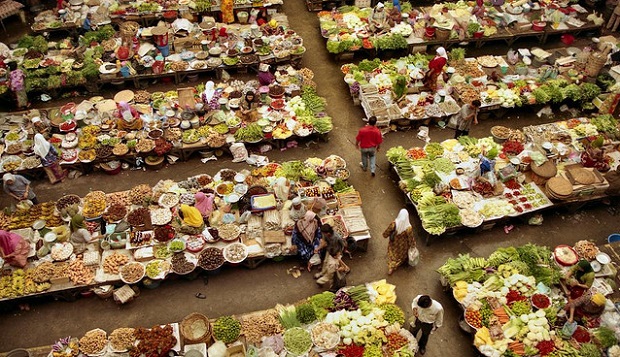 The highest peak in Southeast Asia (4094 metres) is located in Kinabalu National Park, northeast of Borneo, and offers a spectacular view of the island. Most hikers start climbing in the evening to reach the summit in time to watch the sunrise. Easily accessible, but you will need a guide and authorization to access the park. There is no snow at the top, but it’s very cold.

Book your hotel in Kota Kinabalu now on Booking.com 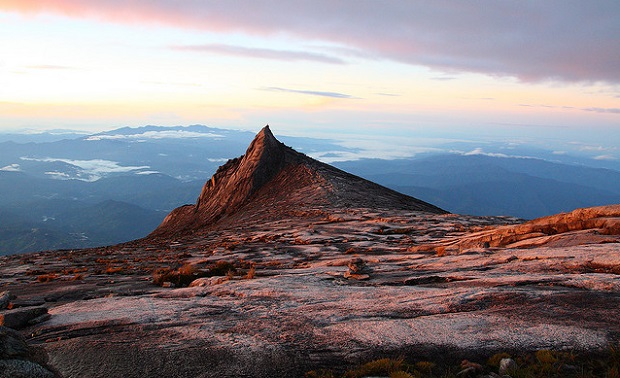 If you are a scuba diver, Malaysia has one of the best diving spots in the world, which is located in Sipadan on the island of Borneo. For beginners or if you prefer snorkelling, go to Tunku Abdul Rahman Marine Park (in Sabah). To dive on wrecks from the Second World War, go to Redang Island. 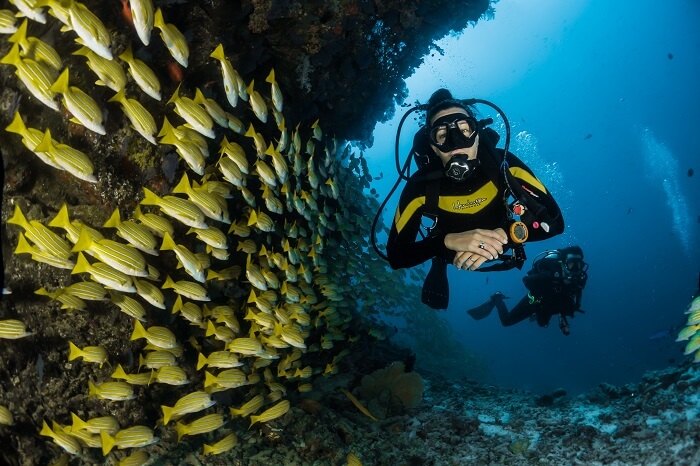 In the heart of the rainforest, you can see orangutans at the Sepilok Orangutan Rehabilitation Center, which was founded to collect and prepare orphaned orangutans to return to the jungle.

You can also approach them at the Semenggoh reserve, near Kuching (the largest city in Borneo). 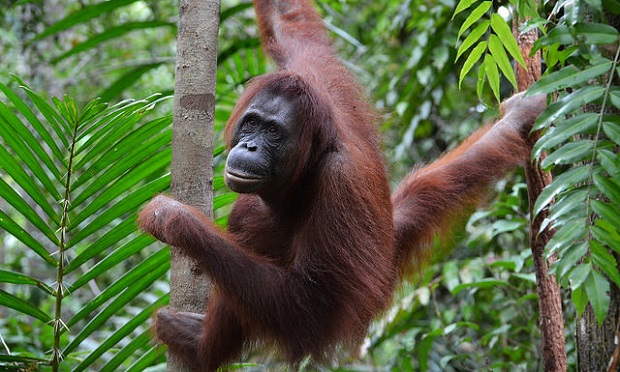 15 – Take a boat trip on the Kinabatangan River

The longest river in Sabah, home to a rich ecosystem and significant wildlife. Remember to bring a camera with zoom as you can see snakes, monkeys, Sumatran rhinos and Asian elephants. You can also do the excursion at night. 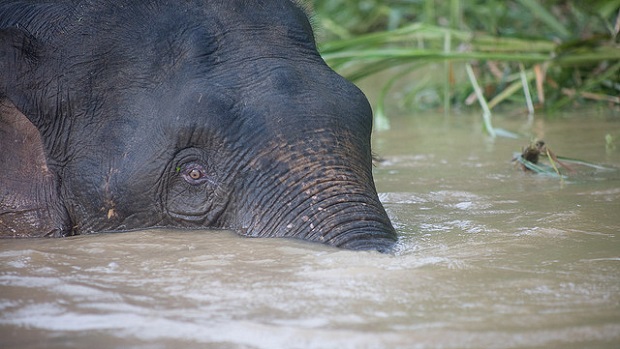 Located in Sarawak, near Brunei, it’s a former headhunting territory of Borneo and a World Heritage Site thanks to its network of underground caves that can be visited (it has the largest underground room in the world). We can also see karst peaks with a dangerous aspect. 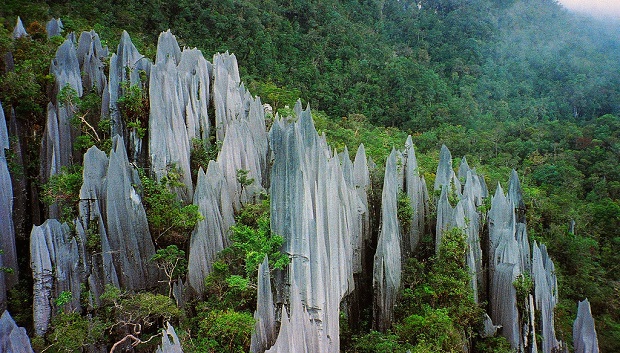 An island off Borneo where you can see many sea turtles and have the chance to watch them lay their eggs every month of the year, in the evening (it’s better to spend the night on the island to enjoy the show). You can also visit a conservation centre that collects sea turtles. More information here. 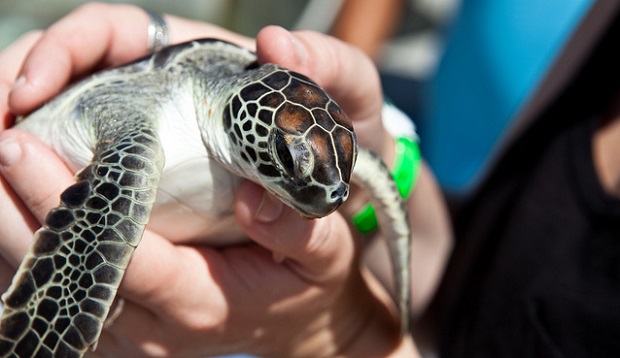 18 – Visit the traditional houses of the indigenous tribes

In Sarawak and Sabah, you can visit traditional longhouses that house several families under the same roof. You must be accompanied by a local guide. Don’t miss the Sarawak Cultural Village, which is 45 minutes from Kuching, and shows an overview of indigenous culture.

If you go there in July, don’t miss the Rainforest Music Festival, which is held at the Sarawak Cultural Village for three days. 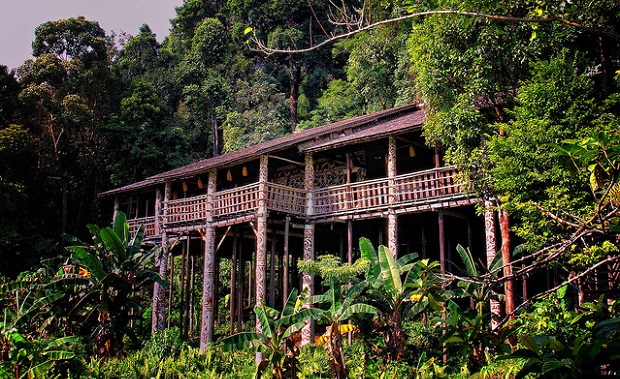 Another national park you should visit in Malaysia, not far from Kuching. You can see nasics (long-nosed monkeys) walking in the forest and mangrove swamps. 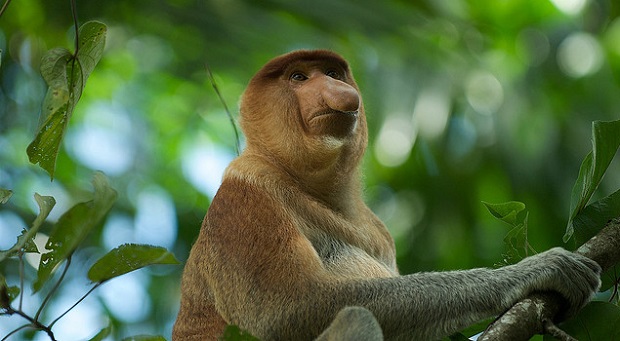 Malaysia’s tropical forests are criss-crossed by many rivers and rafting is becoming an increasingly popular activity, both on the peninsula and in Borneo. The nearest option for those arriving from Kuala Lumpur is to go to Sungai Selangor. In Borneo, the best rapids are to be found towards Sabah. 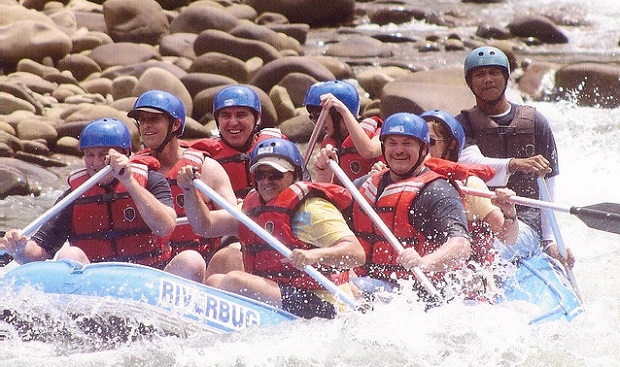