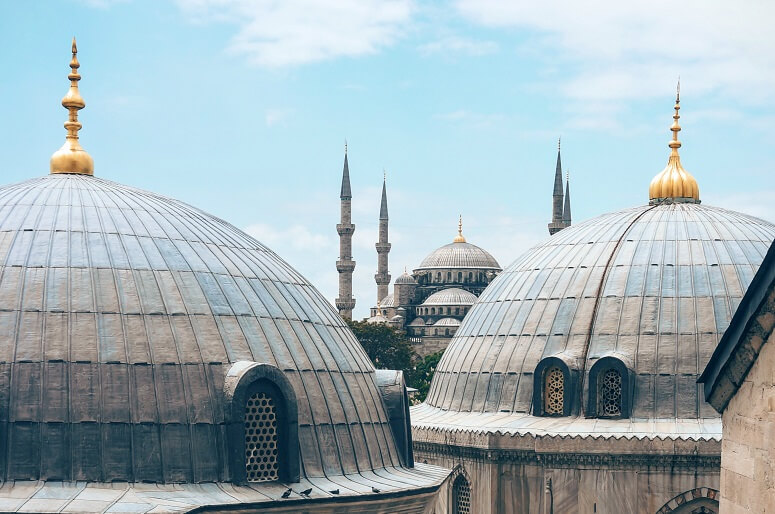 WHAT TO DO IN ISTANBUL (TURKEY🇹🇷)?

Called Byzantium at the time of its foundation, then Constantinople when it became the capital of the Eastern Roman Empire, Istanbul is the only city in the world built on two continents, Europe and Asia.

Where is Istanbul located? Built on 7 hills, like Rome, Istanbul is located in the West of Turkey, and no, it’s not the capital of the country (it’s Ankara). Istanbul is divided in two by the 30 km long Bosporus Strait, which runs from the Black Sea to the Marmara Sea. For centuries, it was the mandatory crossing point for travellers and goods from Europe and Asia. It’s still a major commercial artery, used by thousands of boats every year, which you can also cross by ferry to go from one bank of the city to the other.

The richness of its history and its privileged strategic position have made it an exceptional place where several cultures meet, and where many treasures abound: whether it’s the superb domes of ancient Byzantine churches, the minarets of mosques, the luxurious palaces of Ottoman sultans or the entanglement of narrow streets teeming with activity, Istanbul has plenty to visit.

Even if the city is very large, one of the advantages of Istanbul is that the majority of interesting tourist sites are not too far from each other, which means that you don’t have to spend too much time in the transports.

Why should you visit Istanbul? If you are passionate about history and architecture, Istanbul is simply a must see.

When to go to Istanbul? In terms of climate, the best time to visit Istanbul is from April to mid-November. From April to early June, there are fewer tourists and the weather is pleasant. In summer, there are a lot of visitors: remember to book your hotel in advance and expect to wait in line to visit the monuments. If you can, choose spring and fall. Also avoid the month of Ramadan, which is too quiet.

How many days in Istanbul? You can see the essential attractions in three or four days, but to immerse yourself in the atmosphere and explore well by taking your time, you will need to spend at least one week.

Don’t forget to book your first night in Istanbul NOW on Booking.com

Here are 10 best things to do and see during a trip to Istanbul:

This emblematic monument of Turkey is a masterpiece of Byzantine art. Built in 532, under the reign of Emperor Justinian, the basilica became a mosque in the 15th century, when Constantinople was taken by the Turks. Built on the model of the Pantheon of Rome, this almost square building stands out above all for its immense apse and the cupola that surmounts it. 32 metres high, it rests on four monumental pillars. Bright and decorated with an exceptional set of mosaics, Hagia Sophia can be visited from Tuesday to Sunday. The single entry fee is about 40 Turkish pounds.

It was Justinian who, in the 6th century, had this huge 143-metre-long groundwater reserve built not far from Hagia Sophia. His decision followed the deadly fire caused by a popular uprising. The cistern also had to provide water for the immense city of Constantinople, especially during the many sieges of the city. It was the largest cistern in the city, capable of holding up to 80,000 m3 of water. Inside you can admire, for a very affordable price, the superb marble columns, arranged regularly, and some examples of Byzantine sculptures.

The collections of this vast museum, located in the Eminönü district, are housed in an imposing neoclassical building. It is divided into three different sections. The first is the most important museum, known as the Antiquities Museum, which exhibits precious sarcophagi. The one of Alexander the Great, decorated with bas-reliefs, dates from the 4th century BC. The Musée des Oeuvres de l’Orient Ancien, on the other hand, exhibits pieces as rare as the manuscript of the oldest peace treaty in the world. Finally, you can admire superb blue ceramics in the museum of the same name. You can visit this complex every day, except on Mondays, for an entrance fee of about twenty Turkish pounds.

Built in the 5th century, and restored several times, notably in the 11th century, this church is located in the Edirnekapi district. It offers visitors all the splendours of Byzantine art at its height. The church is especially famous for the splendour of its frescos and mosaics, which date mainly from the 13th century. They represent Christian themes, and illustrate the life of Christ or the Virgin Mary. The church is not open on Wednesdays and the entrance fee is about 15 Turkish pounds.

Built in the 14th century, this tower marked the boundary of the Genoa district and is located in the Beyoglu district. At 68 metres high, this building was the highest in Constantinople at the time. From its top, it was possible to monitor the arrival or departure of merchant ships. The Turks made it a watchtower, from which fires could be spotted. This massive tower was also used as a prison. Today, there is a restaurant and even a disco. For the sum of about 25 Turkish pounds, you can visit it every day. 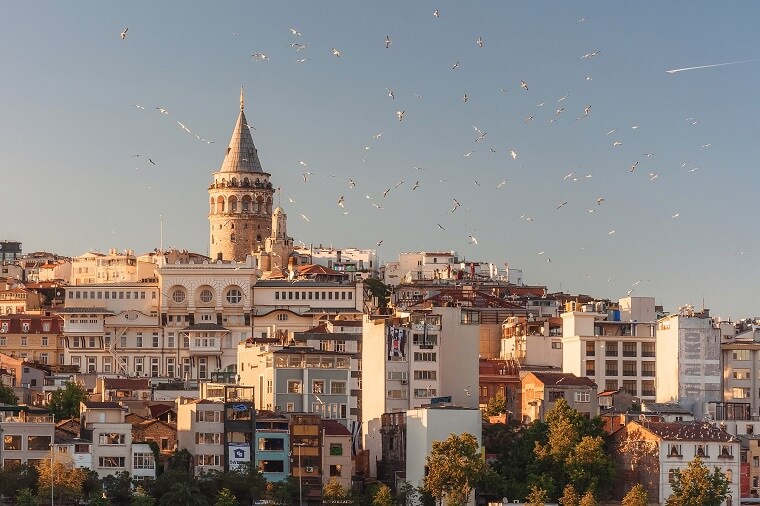 Located in the Besiktas district, on the banks of the Bosporus, this palace is a huge complex of 15,000 m2. With 285 rooms and surrounded by vast gardens, this impressive building was built in the 19th century by modern sultans. This palace was to be to the West what Topkapi was to the East. Inside the palace, the ostensible luxury of the ceremonial rooms alone is worth a visit. The visit to the harem, separated from the men’s quarter, is also full of lessons. The palace and the harem can be visited separately, for an entrance fee of about 15 Turkish pounds. The complex is closed on Mondays and Thursdays.

Built in 1455, shortly after the capture of Constantinople, and enlarged by Suleiman the Magnificent, the great bazaar of Istanbul is located in the old city, on the European shore. Built of wood, and ravaged by fires and an earthquake, the current complex dates, for the most part, from the 1950s. With its 4000 shops and 200,000 m2, it is the largest covered market in the world. In the maze of alleys and under the decorated vaults, you will find here, in the various districts of the bazaar, jewellery, ornaments, carpets or antiques. 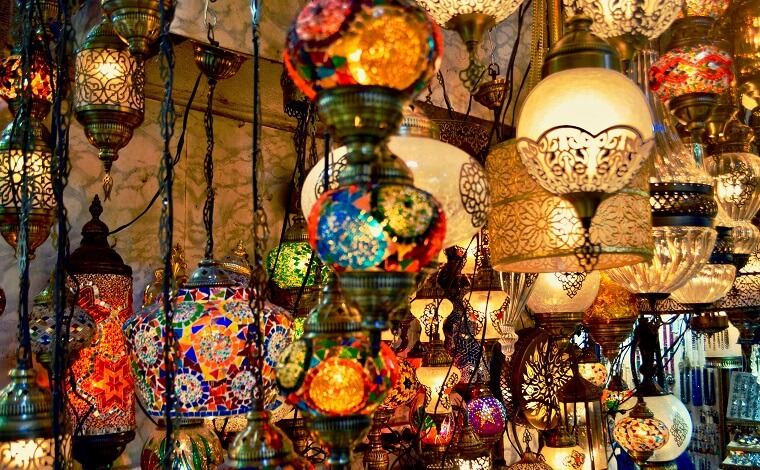 Built in the 16th century by Suleyman the Magnificent, the Suleymaniye Mosque is, along with Saint Sophia, one of the most beautiful in Turkey. Framed by its four long minarets, it also dominates, from the top of its hill, the waters of the Golden Horn. You enter the mosque through a graceful porticoed square, and inside, you are dazzled by the bright light that gushes out of its 138 windows. This vast complex, which covers 70 hectares, also includes a Koranic school and a library.

Built in the 17th century, the blue mosque also includes, in its vast perimeter, a renowned Koranic school and a hospice. Equipped with six minarets, this imposing building is the largest mosque in Istanbul. Inside, you will be impressed by the height of the central dome and the harmony given to the whole by the domes. The mosque owes its name, and part of its fame, to the thousands of blue faience tiles that cover the walls. The impression, heightened by the light flooding the vast room, is truly unique and justifies the reputation of the place. The entrance fee is about 40 Turkish pounds and the mosque is closed on Mondays. 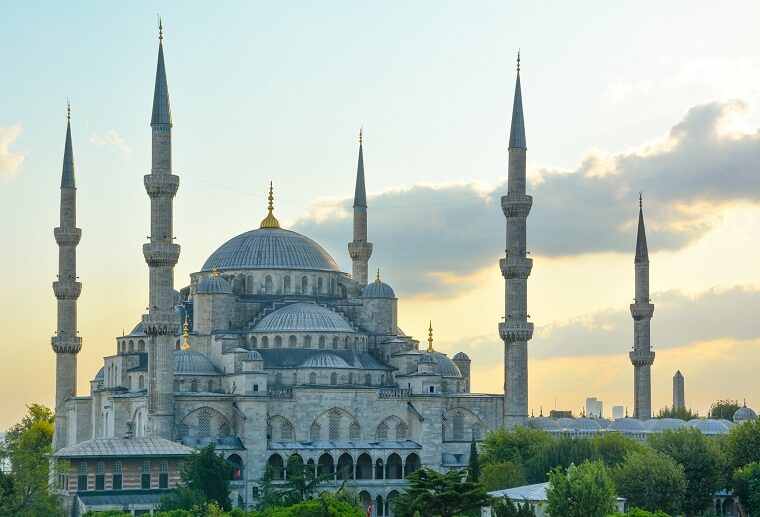 Located in the Fatih district, and built in the 15th century, the Topkapi Palace was the residence of the Ottoman sultans. This gigantic complex, which covers nearly 70,000 m2, includes a maze of courtyards, gardens, kiosks, fountains and pavilions. The row of four main courtyards is dominated by large doors. The visit of the imposing harem allows you to enter into the details of a rigorously organized courtyard life. The rooms where the councils were held are also worth a visit. The palace and the harem can be visited separately. You will pay 40 Turkish pounds to enter the palace itself, and 25 to discover the harem.