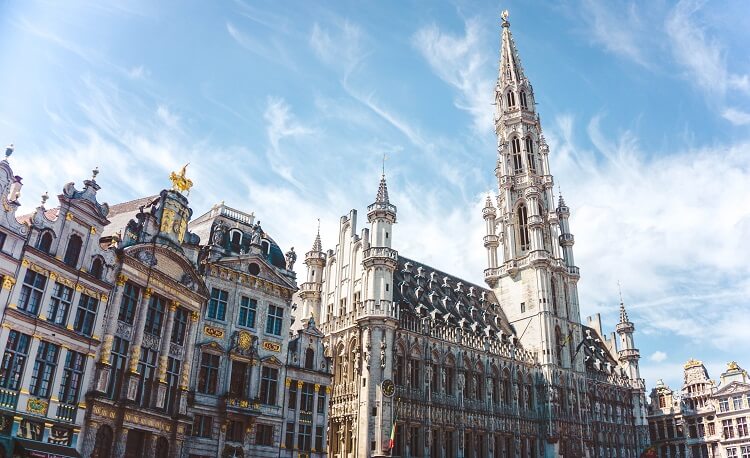 What are the best things to do and see in Brussels (Belgium 🇧🇪)?

Brussels is not the most beautiful city in Europe, but the Belgian and European capital is rich from its medieval past and possesses a warm and friendly character. Its architecture oscillates between the authentic and the contemporary, and there’s a lot of green spaces. It’s also a very multi-cultural city, and a fully bilingual French and Flemish city where almost all the inhabitants also speak good English.

Concerning the gastronomic specialities, it’s easy to fall into excess during a weekend in Brussels where you want to taste everything in a very short time: chocolates, waffles, mussels & fries, beers…

Located between France and the Netherlands, Brussels is the link between Latin and Germanic cultures. It’s also one of the headquarters of the European Union. It is estimated to have been founded in 979. At the beginning of the 12th century, trade became a main actor in Western Europe, and thanks to its port on the Senne river, Brussels became an important commercial crossroads.

Thanks to the canals and rivers of the region, Ghent, Bruges, Antwerp, Leuven have all been able to become real commercial hubs allowing goods to pass from Germany to France, England but also Italy. For two centuries, Brussels enriched itself cheerfully.

The famous Battle of Waterloo, which oposed the French army (led by Napoleon I) against the Allied army, commanded by the Duke of Wellington and composed of British, Germans and Dutch (Belgian and Dutch units), joined by the Prussian army, took place less than 20 km south of Brussels, on 18 June 1815.

Don’t forget to book your first night in Brussels on Booking.com

Here are the 10 best things to do and see in Brussels:

Proudly standing in the capital since the 1958 Universal Exhibition, the Atomium is a 2,400-ton scientific sculpture representing the internal structure of a 165 billion times larger iron mesh. For a few euros, it is possible to slip into the Atomium for a visit of 5 of its 9 metal spheres using one of the fastest elevators in the world. With a height of 102 metres, this monument is one of the most famous in the city and regularly hosts temporary scientific exhibitions for educational purposes.

A few steps from the Atomium, there is another unmissable attraction in Brussels: the Mini-Europe park. Representing 80 cities and 350 houses of the European Union on a scale of 1/25, the park offers very faithful miniature reproductions of the most beautiful monuments in Europe. It covers more than 24,000 m2 and includes exhibitions and interactive activities. This paid park is above all an opportunity to learn more about European cities while taking funny pictures alongside these more real than life mini-monuments.

The Royal Museums of Fine Arts of Belgium are an association within various buildings of 6 national museums (the Magritte Museum, the Museum of Ancient Art, the Fin de siècle Museum, the Wiertz Museum, the Meunier Museum and the Museum of Modern Art) which include more than 30 000 works and objects. Some of the masterpieces of the work of the Belgian surrealist painter Magritte are really worth a visit and a visit to the various buildings will provide a good opportunity to learn about the evolution of Belgian art and architecture. Admission is charged.

The Grand Place is often considered as one of the most beautiful squares in the world and the heart of Brussels. It is the oldest market place in the city. It has been a UNESCO World Heritage Site since 1998. Entirely paved, the Grand Place is a must for these 19th century houses, for the King’s house and for its magnificent Museum of the City of Brussels located all around the square. Very lively in the evening, this square is rooted in the origins of Brussels and represents a real godsend for lovers of history and architecture. It can be visited free of charge. 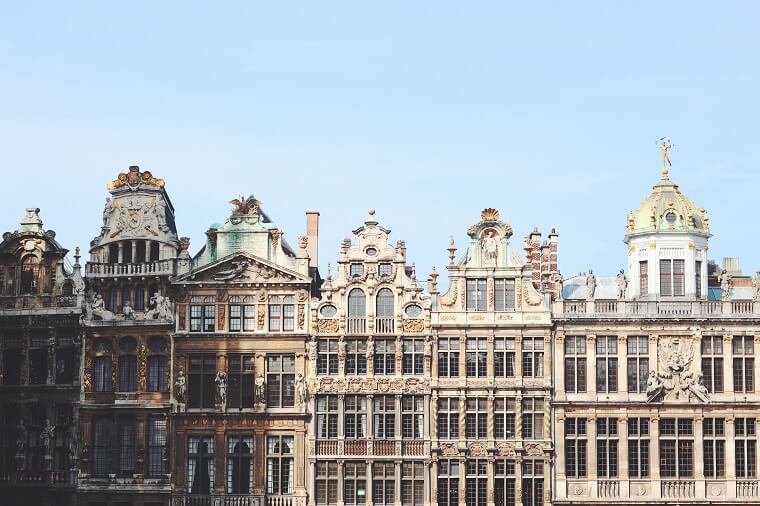 Your discovery of the old city of Brussels is the logical continuation of your visit to the Grand Place. The surrounding area is rich in medieval, Gothic and other Renaissance buildings. Your route in the heart of the city must therefore pass through the Place de la Bourse and include a passage through one of the narrow and typical impasses of Brussels. Unmissable, Place Brugmann, Avenue Molière and Avenue Louis Lepoutre as well as Abbaye de la Cambre will give you the opportunity to take splendid pictures of the capital. Many of the city’s hotels are also listed as UNESCO World Heritage Sites, such as Tassel or Solvay.

This visitors’ centre of the European Parliament is the ideal way to discover the secrets of European politics in a fun and interactive way. It was inaugurated on 14 October 2011 by the President of the European Parliament, Jerzy Buzek. The tour includes 360° films, interactive activities and site reconstructions to help visitors understand the European Union and how it works. Admission is free and there are successive temporary exhibitions on the themes of citizenship, European politics or history.

This superb Gothic-style building, built from 1225 to 1519, is steeped in history and secrets. Its subsoil is an observable archaeological site overlooking a Romanesque crypt. This architectural jewel is composed of two 64 metres high towers. The many statues, stained glass windows and sculptures that can be seen inside the nave are among the most spectacular religious works in Brussels, as is the great organ. The entrance is charged, but the exterior alone is worth a look. With a little luck, you’ll even have the opportunity to observe one of the families of falcons in flight, these majestic birds have been installed in the upper part of the left tower since 2004. 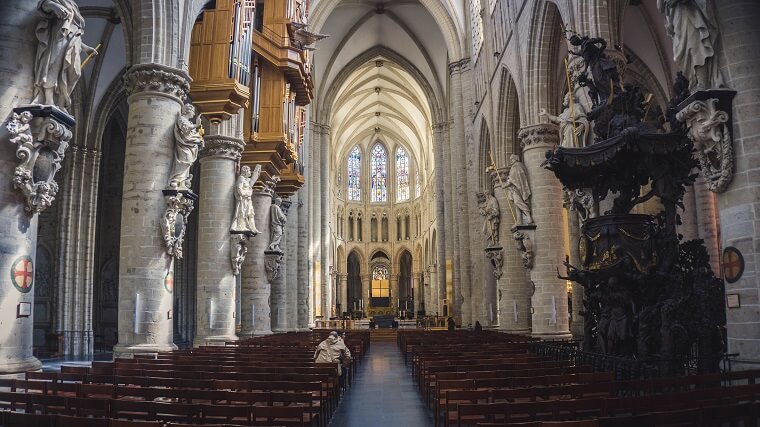 This free tourist attraction is a fountain about 60 cm high representing a young boy who pees. If the exact date of the creation of the Manneken-Pis is unknown, it’s very likely that this famous statue dates from the first half of the 15th century, or even the end of the 14th century. Many legends have been born over time around the little man, ensuring that the fountain has the power to distribute wine or beer during certain Brussels festivals. These folk tales have made Manneken-Pis the city’s iconic monument, forcing all visitors to Brussels to take pictures of themselves alongside the famous little boy.

Shoppers will be able to combine tourist shopping and history in one of the three commercial passages that make up the Galeries Royales Saint-Hubert. The Queen, King and Princes Galleries were inaugurated in 1847 and are among the oldest shopping centres in Europe. It’s a chic and trendy place to stroll, combining architectural wonders such as the Theatre, the Cinema and the Tavern, all under a splendid arched glass roof. The visit is free of charge as long as you resist the temptations it provokes.

The gastronomic treasures of the Belgian capital make detours through some shops, brasseries and restaurants inevitable. Indeed, it’s unthinkable to visit Brussels without going through the ‘Maison des maîtres-chocolatiers belges‘ to taste some chocolates or to avoid one of the many family breweries in the old town. Lunch will be an excellent excuse for a dish of mussels and chips, while as a snack you can stop in one of the waffle huts to taste the real Brussels waffle. 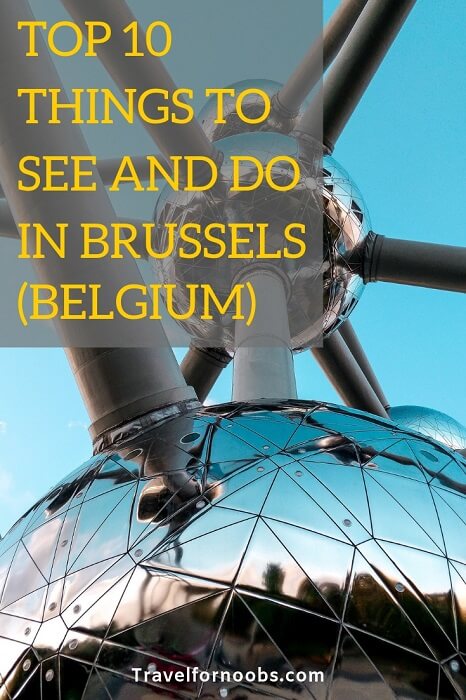