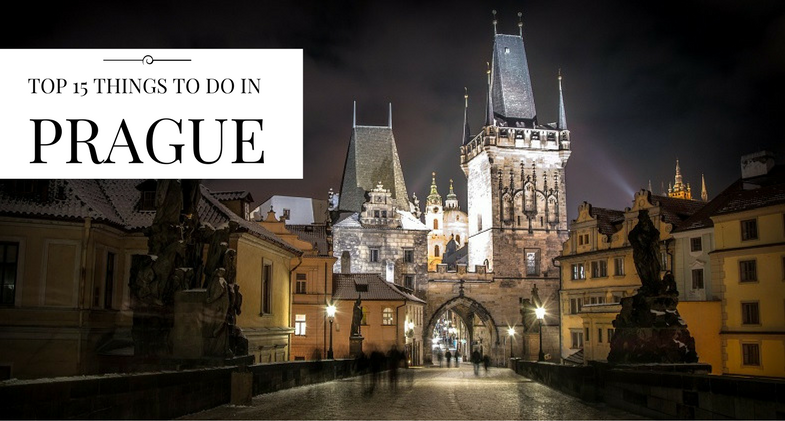 What are the best things to do and see in Prague?

Located in the heart of Central Europe, the capital of the Czech Republic is one of the most beautiful cities in Europe, with nearly 600 years of architecture unaffected by war or natural disasters. Prague (Praha in Czech) has preserved more or less its medieval layout and offers a mixture of Baroque, Rococo and Art Nouveau architecture. For 40 years the city remained inaccessible behind the Iron Curtain but everything changed in the 90s and Prague is now one of the most visited destinations in Europe thanks to its fascinating cultural richness.

Prague is visited all year round, and the city is particularly beautiful at Christmas with the decorations that add an extra charm to the city (but it is very cold!). The months of July and August are not necessarily the most pleasant because of the too large number of tourists … think to get up very early in the morning to visit in peace! One can visit Prague in one weekend but the ideal would be to stay 3 or 4 days to also explore the surroundings.

For those on a budget but wanting to visit a maximum of things, the Prague Card is a pass that offers discounts on most of the city’s monuments and museums. It includes free transportation as well as transfers from the airport and the funicular to reach the top of the Petřín hill.

Even though Prague has a cheap and reliable public transport system, the city can easily be reached on foot as all monuments are concentrated in the historic center and around Charles Bridge. That said the subway, a legacy of the Soviet era, is clean and simple to use. You can also take the tram n ° 22 from Národní třída, where you can enjoy a nice visit of the city to the castle.

Here are 15 things to do and see on a trip to Prague:

1. THE CASTLE OF PRAGUE AND CATHEDRAL SAINT-GUY

It is one of the largest castles in the world, overlooking the Mala Strana district. Visible from all over Prague, the imposing Saint-Guy cathedral is located within the castle walls and overhangs it in height (its arrows rise more than 99 meters). It is possible to reach the summit to admire the view of Prague. Construction began in 1344, but work was completed only in 1929. It houses the chapel where St. Wenceslas is buried, the tomb of the kings of Bohemia and the hall where the jewels of the crown are preserved. Within the walls of the castle, do not miss the golden lane, a small street made up of small dwellings where the staff of the castle lived. The monument not to be missed in Prague (I mean, it’s hard to miss). It spans over the Vltava river and connects the historical district of Malá Strana to the old city. The Charles Bridge is adorned with a gallery of thirty statues and sculptures dating from the 15th and 16th centuries, which form a true guard of honor for tourists, painters and other souvenir merchants who are there during the day … Don’t hesitate to get up at dawn to enjoy the place in the quiet! On each side of the bridge you can find fortified towers which can be visited to enjoy superb views. This square has seen the highlights of the history of the country and is one of the most beautiful place in Prague. It is surrounded by buildings with magnificent facades that show the architectural diversity of the city. The place is particularly busy during the Christmas market. The square is dominated by the tower of the town hall and the Gothic church of Our Lady of Týn, with its two towers which culminate at 80 meters. It is possible to visit the interior of the church outside the mass hours (free entrance). A few tips: try to visit the Old Town Square early in the morning as the place attracts a lot of people. Avoid nearby restaurants and cafes as prices are higher than elsewhere! It’s located on the south wall of the town hall. Made in 1410, it is one of the oldest astronomical clocks in operation in the world. It comes alive every hour between 9 am and 9 pm, and the twelve apostles can be seen there. The show attracts a lot of tourists (pay attention to pickpockets). 5. ADMIRE THE VIEW FROM THE CITY HALL TOWER

It is possible to climb up the tower of the town hall to enjoy a 360 ° view of Prague, with the castle and the cathedral in the distance. The location is quite cramped and it is difficult to get around if there are too many people, so avoid busy hours. The Gothic tower from the mid 14th century is 70 m high and was later added to the main building. It is possible to take a guided tour of the town hall, including the ceremonial halls, the foundations of the tower, as well as the mechanism that controls the astronomical clock. This site perched high on a hill allows to get away from the hustle and bustle of Prague while contemplating the panorama of the city in the distance. The castle of Vyšehrad was the home of the kings of Bohemia until 1140. Even if only the ruins of the castle remain, you can visit the church, a cemetery that houses the tombs of well-known Czech characters, and the vestiges of the ramparts. There’s also a museum and an art gallery. Don’t miss the Basilica of St. Peter and St. Paul, visible from all over the city.

An informal memorial dedicated to the former member of the Beatles … It collects tributes in the form of colorful graffiti, since the 1980s. John Lennon never came to Prague but in the 80s he was a symbol of freedom of expression and peace for the Czech students, repressed by the communist regime. On the day of his assassination, a portrait of him was made on the wall and since then others were added. Anyone can leave a message there. The Champs-Élysées of Prague: it is not really a square but rather a 750 meters long boulevard with contemporary architecture, located in a district known for shopping and very lively in the evening with nightclubs and bars. The National Museum overlooks the square, with the equestrian statue of St. Wenceslas in front of it. If you have time, check the view from the town hall of the new city. 9. ADMIRING THE VIEW FROM THE PETRIN HILL

A very romantic and quiet place, ideal to get away from the crowds of tourists. Perched on top of a 318 meter hill overlooking Malá Strana, there is a 64-meter high observation tower resembling the Eiffel Tower, which was inaugurated in 1891 on the occasion of the Prague Jubilee Exhibition. From its summit you can admire all the main districts and monuments of Prague and the surrounding countryside. The place that inspired the writer Franz Kafka and where the legend of Golem was born. The former unhealthy Jewish ghetto was completely transformed in the early 1900s and nowadays you can see beautiful buildings of Art Nouveau architecture. It’s possible to visit the old Jewish cemetery, one of the oldest in Europe, with its tangle of gravestones and old synagogues. 11. WALKING ALONG THE QUAYS TO THE DANCING HOUSE

The dancing house is a modern building built in the early 90s, quite surprising to see with its curved construction. There is a bar and a restaurant with panoramic terrace accessible from 4pm to 6pm. That being said, the real attraction of the place is the stroll that leads to the dancing house, following along the eastern shore from the Charles Bridge. The colored facades of the old buildings along the quays are superb. 12. THE MEMORIAL TO THE HEROES OF THE ATTACK AGAINST HEYDRICH

A memorial dedicated to Czechoslovak paratroopers who assassinated the Nazi leader Reinhard Heydrich on 27 May 1942 during Operation Anthropoid. They found refuge in the crypt of the Baroque church of Saints Cyril and Methodius but were caught up by the German soldiers. A museum is located in the crypt of the church and recount the attack on Heydrich.

A little far from the center but really worth a look, especially since there are very few tourists who go there and the entrance is free: the museum is located at the foot of the hill of Vítkov, in old buildings built at the end of the 20s. It explains the history of the Czech and Slovak troops during the First World War, the interwar years, and the Second World War. An exhibition is also devoted to the anti-communist resistance as well as the murder of Heydrich. 14. THE MUNICIPAL HOUSE AND THE POWDER TOWER

Two buildings with completely different architectural styles glued together: the municipal house is one of the most beautiful buildings in Prague, in the very sumptuous Art Nouveau style, and was built between 1905 and 1912. Do not miss a guided tour (don’t forget to book). The dark Powder Tower is on its left, and is one of the last vestiges of the ramparts of the old city. The view at the top offers a superb panorama over Prague. 15. THE STATUE OF FRANZ KAFKA

An astonishing 11 meter high statue located in the center of Prague since 2014, near the Národní třída metro station. Signed by the famous Czech sculptor David Černý, this installation of 39 tons was made in homage to the writer Franz Kafka. It consists of 42 strata that turn on themselves.

See also, the strange statues at the entrance of the Franck Kafka Museum. MORE THINGS TO SEE IN OR NEAR PRAGUE

If you have a little more time in Prague, here are some places you should take a look:

BEFORE YOU GO TO PRAGUE

Book your hotel in Prague now on Booking.com

Book your hostel in Prague now on Hostelworld.com

Powered by GetYourGuide. Become a partner.