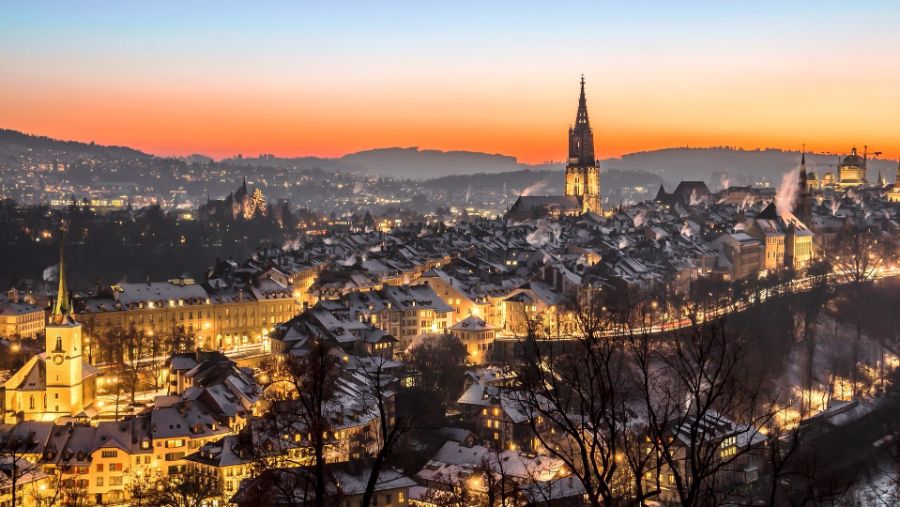 WHAT TO DO AND SEE IN BERN ? 🇨🇭

Facing the Alps and crossed by the loops of the Aare river, Bern is a pretty little town listed as a UNESCO World Heritage Site for its historic old town well preserved which contains many interesting buildings and museums. Founded in the 12th century, the medieval old town is unique with its green sandstone facades and arcades.

Although it’s the federal capital of Switzerland and the fifth largest city of Switzerland with 133,000 inhabitants, Bern is one of the smallest capitals in Europe and can be visited easily on foot.

Where is Bern? Bern is located in the heart of Switzerland, in the Canton of Bern, a little west of central Switzerland and 20 km north of the Bernese Alps.

How to get to Bern? From Zurich, you can reach Bern in 1 hour by train or 1h30 by car. There are many trains connecting them. Bern nearest airport in Belp, but it might be more convenient (and cheaper) to go to Zurich.

How many days should you stay in Bern? If you go to Switzerland, it’s really worth visiting Bern for a day or half a day (the city is rather compact and can be visited quickly).

Where to stay in Bern? You’ll find plenty of hotels on Booking.com.

Here are the 10 best things to do and see in Bern:

Located on a hill surrounded by the Aare River, Bern has a medieval historic centre that is a UNESCO World Heritage Site for its well-preserved architecture, despite modern urban development. You can see small cobbled streets passing between historic limestone buildings, walk under 15th century arcades, and admire superb fountains, especially the one of justice (Bern has about a hundred fountains).

Don’t miss a cocktail in the evening or book a table at the impressive Kornhaus Keller, a former cereal warehouse converted into a restaurant. For lunch or a drink, you can also settle down on Bärenplatz. From there you can see the Holländerturm (or Dutch tower).

Just a word of advice before visiting Bern on foot: be very careful with trams! 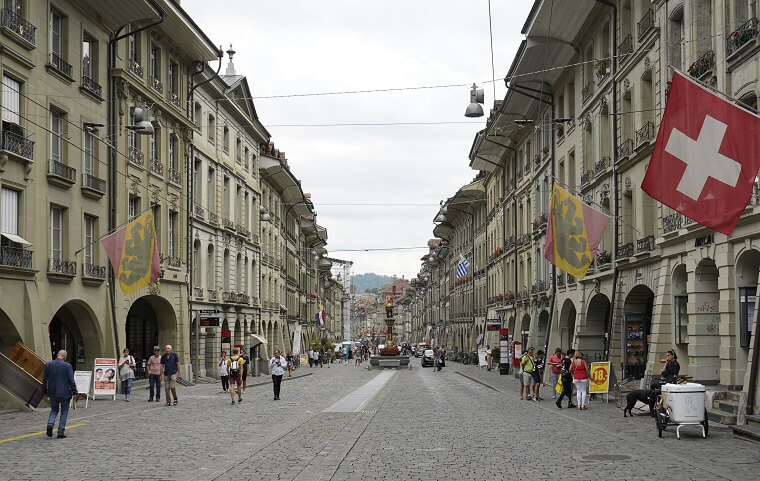 The cathedral (Berner Münster), a landmark in the city of Bern, symbolizes the city’s religious history. Built in 1421, it is easily identifiable by its arrow, the highest in Switzerland. After climbing 344 steps you can see a superb 360° panoramic view of the old town and the largest bell in the country (almost 10 tons!). Visitors have the opportunity to discover the beauty of an interpretation of the Last Judgment above its portal. It includes more than 200 figurines and the macabre, but no less fascinating, dance of death. Admission is free (access to the bell tower is charged). 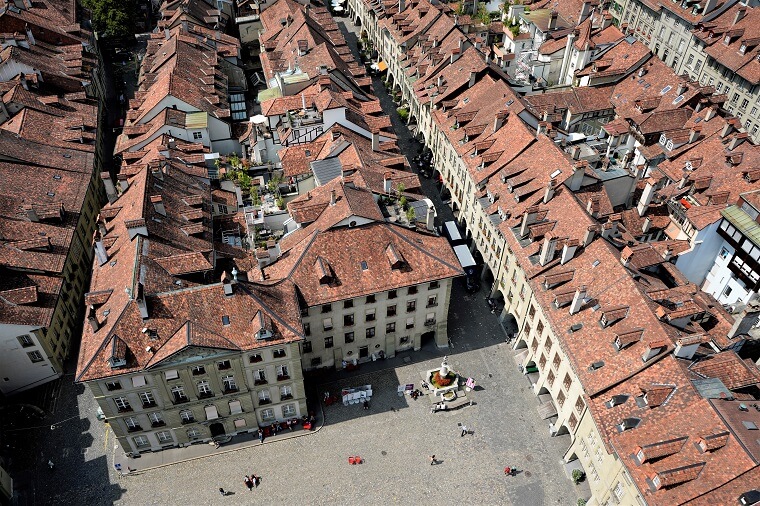 Walking along the main street bordered by the arcades (Kramgasse) you come across the Astronomical Clock Tower (or Zytglogge in Bernese dialect). By coming before the exact hours, you can enjoy a show of small automatons. A visit to the inside of the tower allows you to appreciate the complexity of the mechanism (book at the tourist office).

Just in front of the tower, do not miss the fountain of the ogre devouring a child, quite nightmarish. To see along the Kramgasse: Einstein’s apartment (Einstein Haus) where the physicist lived with his wife and son between 1903 and 1909. Furniture, photos and documents were left as they were then. That’s when he discovered the famous E=mc² formula. 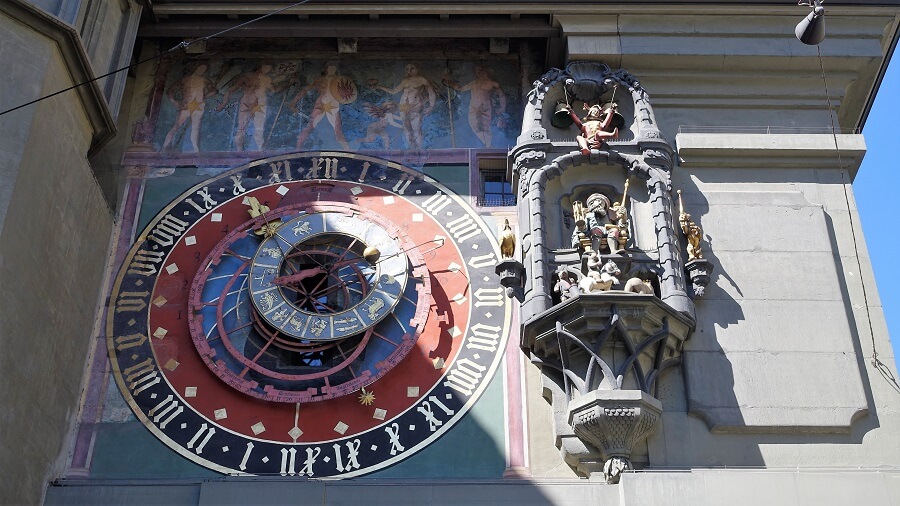 Easily recognizable by its large dome, the Federal Palace is the seat of both the government (the Federal Council) and the Swiss Federal Assembly. We would tend to forget it, but Bern is the capital of the country! Sound and light shows are sometimes projected on the facade of the building. The Palace can be visited but it is necessary to book in advance. It dominates the Federal Square of Bern where you can see 26 fountains representing the 26 Swiss cantons.

5. SWIM DOWN THE RIVER

For good swimmers, it is possible to swim down the Aare. Remember to take a buoy or something to stand on the surface to let yourself float. The water is quite cold, even in summer! Most people leave from Eichholz Park. Above all, be sure to get out of the water when you arrive at the Marzili pool! There are signs indicating where to go out at several places along the river. Also avoid going in the water if you have drunk alcohol before. 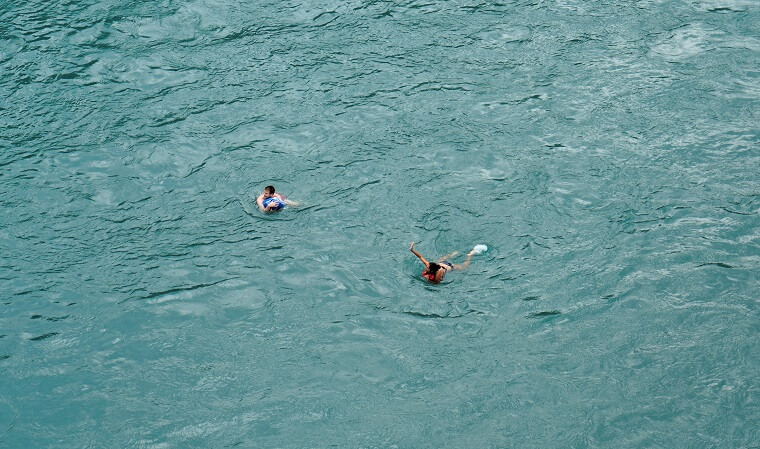 6. ADMIRE THE VIEW FROM THE ROSE GARDEN

One of the most beautiful parks in Bern, very well maintained. It’s one of the best views of the old town and the Aare loop. However, it is known for its countless flowers, including some 220 varieties of roses, 200 irises and 28 rhododendrons. The place is very pleasant to rest and take pictures of the city. There is also a restaurant where you can have coffee or food. 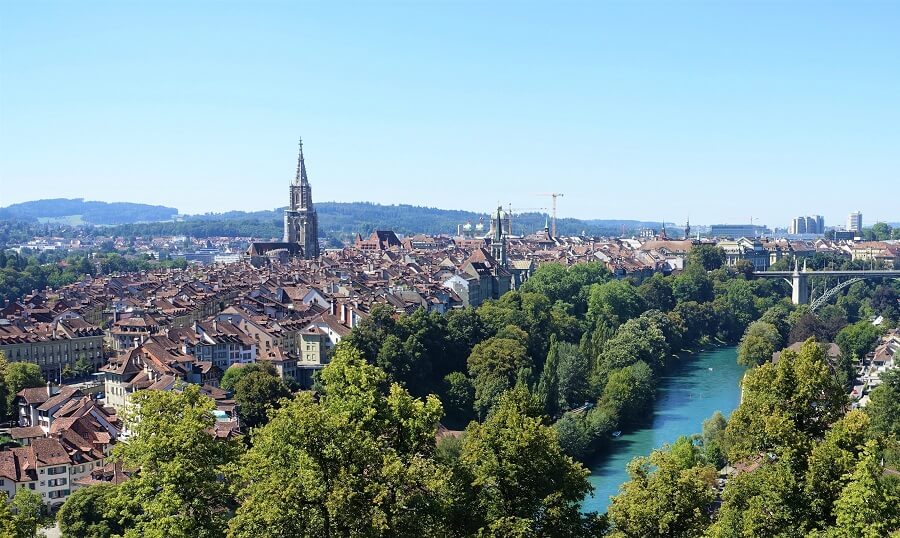 7. THE BERNE HISTORY MUSEUM AND THE EINSTEIN MUSEUM

Both are housed in a single building, an old neo-Gothic castle dating from 1894. The History Museum of Bern is one of the most important Swiss museums dedicated to history and civilization. A variety of collectibles can be found that tell the story, archaeology and ethnography of the region. In all, there are 500,000 elements dating back to the Stone Age in the present day. As for the Einstein Museum, it relates the life and professional career of this famous physicist.

As the bear is the symbol of Bern, the city has a well-developed park where visitors can observe several of these animals and read about their lifestyles. The park is located not far from the river and replaces the old bear pit from 1857. Don’t expect to see bears if you go there in winter because they hibernate! Not far from the park is the tiny museum of Swiss brands, where you can find products 100% invented in Switzerland. 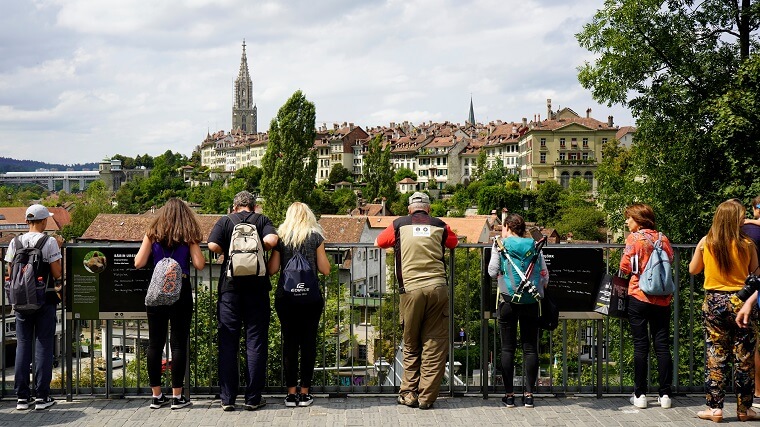 To enjoy a magnificent view of Bern and the surrounding area, you can go to the top of the Gurten hill (858 metres). It can be reached by foot or by funicular. There is a panoramic tower. With a playground and a miniature railway, the place is very popular for relaxing with the Bernese family. There is also a toboggan run that opened in 2016. Restaurants and an open-air theatre are also open.

A little far from the old town but easily accessible by bus, it brings together the many works of the Swiss painter Paul Klee in a superb modern building. A must visit if you love modern art.

OTHER THINGS TO DO NEAR BERN:

If you have some time in Bern, here are some other places to visit that are worth a look:

BEFORE YOU GO TO BERN

Book your hotel now in Basel on Booking.com 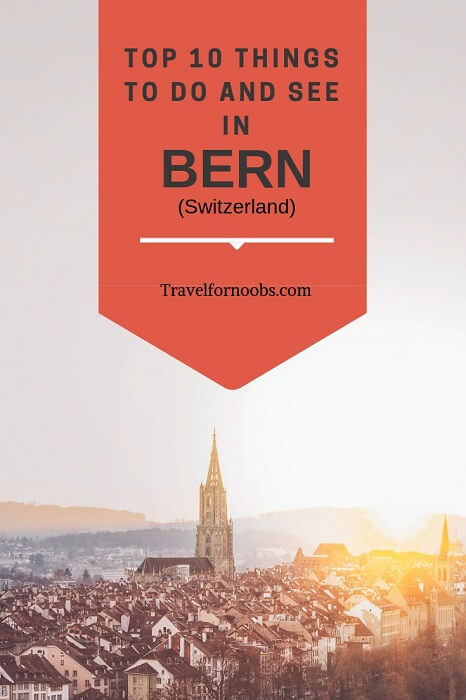