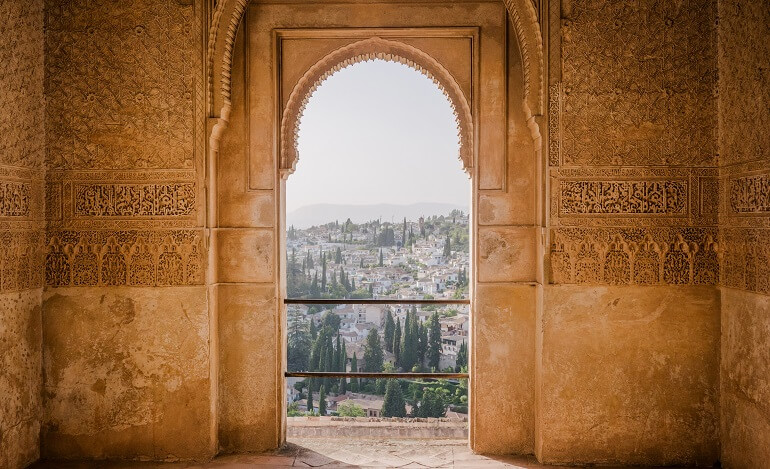 WHAT ARE THE BEST PLACES TO VISIT IN SPAIN?

One of the most important tourist destinations in Europe, Spain enjoys a privileged climate, with omnipresent sunshine and pleasant temperatures all year round. It’s also known for its prestigious tourist sites such as the Alhambra of Granada, the Cathedral of Seville or the Sagrada familia, but it also hides little known regions that contain sites classified as World Heritage by UNESCO.

Spain attracts for its rich historical and cultural heritage, its diverse landscapes, and its festive atmosphere. Spanish cuisine is an integral part of a trip to Spain, where it’s essential to taste the local specialities. Festivals such as the Tomatina or bullfights are also reasons to visit Spain.

With about 4900 kilometres of coastline, Spanish beaches are ideal for swimming, although parts of the Spanish coast have unfortunately been disfigured by construction. To travel in Spain, the car remains the most practical solution to visit the country at your own pace and get off the beaten track.

Where is Spain located? Spain is located, with Portugal, on the Iberian Peninsula. It’s open to both the Mediterranean Sea and the Atlantic Ocean. In the north of the country, the Pyrenees mountains mark the border with France. To the south, the 14km wide Strait of Gibraltar separates Europe from Africa. Spain also includes archipelagos (the Balearics and the Canaries) and two small enclaves in Africa. Mount Mulhacén is the highest peak in continental Spain (3482 metres). It’s located in the province of Granada, in the south-east of Spain and is part of the Sierra Nevada mountain range.

When to go to Spain? The best time to visit Spain is in spring and autumn, when the temperatures are pleasant and tourists are less present. If you have to come in summer, choose the north of the country to avoid the stifling heat.

⚠️ In Spain, you will have to adapt to a different pace of life: lunch is served around 1pm, dinner not before 9pm and many shops are closed between 2 and 5pm. Spanish nightlife doesn’t start until 11pm….

On this page, you will discover in pictures the main experiences not to be missed in Spain, its must-see tourist sites, lesser-known places of interest and attractions that are worth a visit (cities, national parks, monuments…).

Although it’s impossible to see everything at once, this selection may be useful for you to plan a travel itinerary and decide that visiting Spain, giving you a taste of the best things to do and places to see.

Here are 20 best places to visit in Spain:

The capital of Catalonia (and the second largest city in Spain) has monuments with unique architecture thanks to Gaudí’s creativity: the Sagrada Familia, the Casa Batlló, the Güell Park…). Add to that the beach and excellent tapas bars, and you have one of the best places not to be missed in Spain. 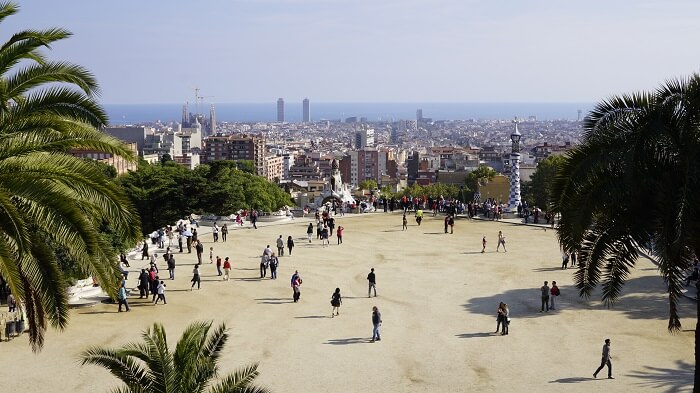 Located in the province of Málaga, you can see amazing rock formations that are the result of thousands of years of erosion. The place is quite wild but easily accessible. With a little luck you may be able to see ibexes there. 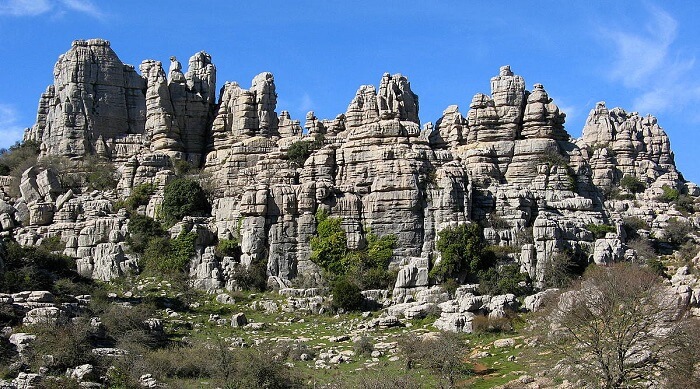 Santiago de Compostela marks the end of the famous pilgrimage route. The city is a World Heritage Site for its medieval historic centre and its beautifully designed old streets around the cathedral. 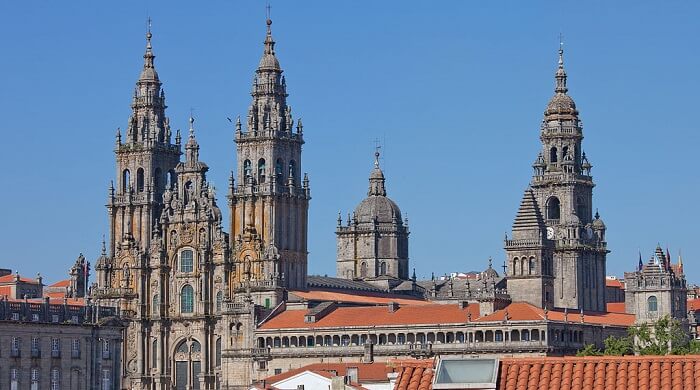 A magnificent city located halfway between Barcelona and Madrid, on the banks of the Rio Ebro, there are many historical sites, excellent restaurants and fewer tourists than in the two cities mentioned above. Not to be missed: the fortified palace of Aljaferia, the Basilica of Nuestra Señora de Pilar, and the ancient Roman fortifications. 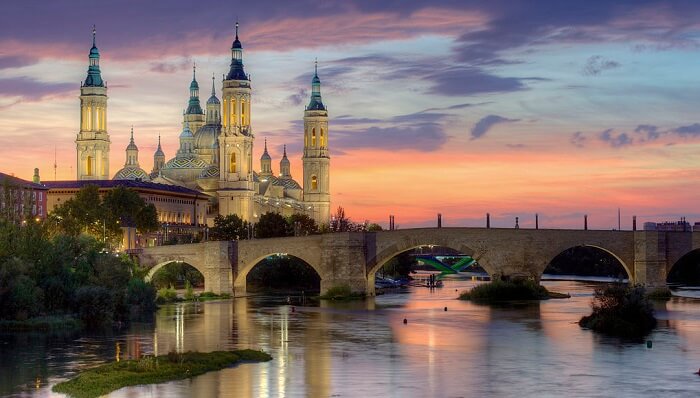 Another UNESCO World Heritage Site, Toledo is located about 60 kilometres south of Madrid and is known for its architectural heritage influenced by different civilizations. 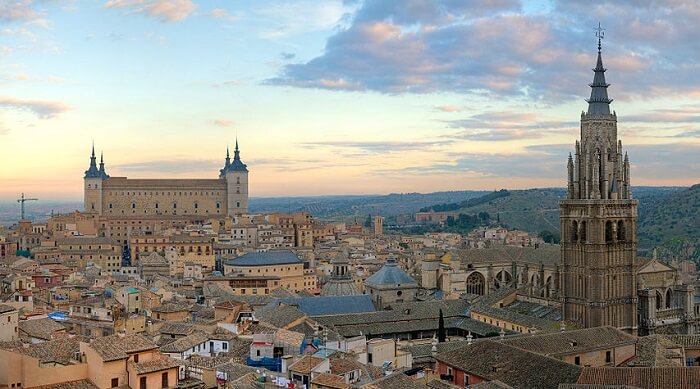 6. The Roman ruins of Merida

This is the most important Roman archaeological site in Spain. Very well preserved, especially the remains of the amphitheatre and the 2000 year old theatre which give the impression of travelling back in time. A 12 euro pass allows you to visit all the city’s sites. 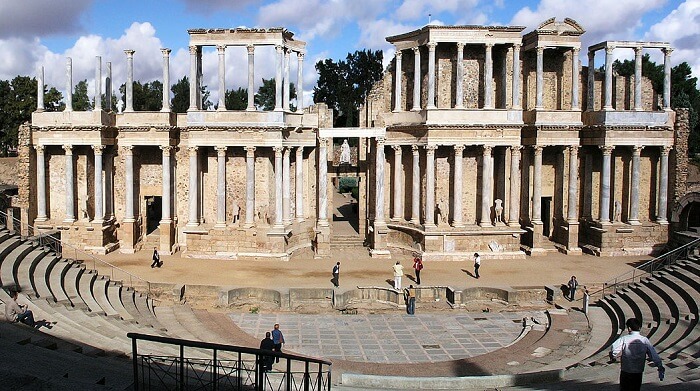 7. The coast of the Rías Baixas

The northwestern coast of Spain is divided by valleys invaded by the sea called “Rías Baixas”. They form a magnificent natural landscape, ideally to explore with your own vehicle. 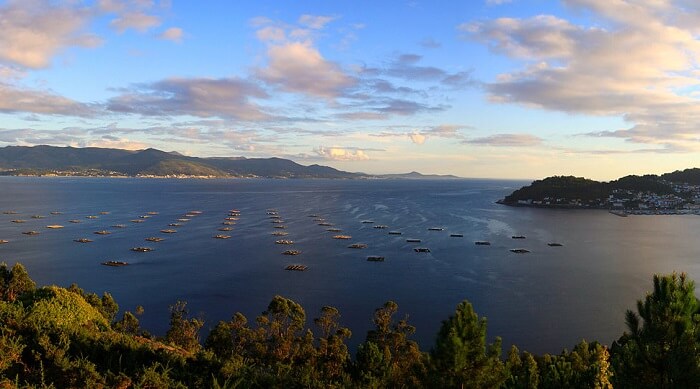 Located in the Pyrenees, this national park shared between France and Spain at the foot of Monte Perdido (3355 metres) shelters landscapes of superb valleys, peaks and spectacular canyons among the largest in Europe. 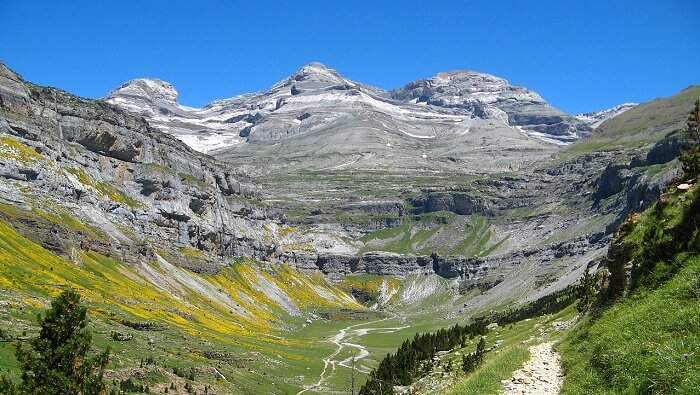 A hiking trail that allows you to discover breathtaking gorges thanks to footbridges hung on the sides of the cliffs. It was nicknamed before the “most dangerous path in the world”. Nothing more to fear, the site has recently been redeveloped to accommodate tourists in complete safety. 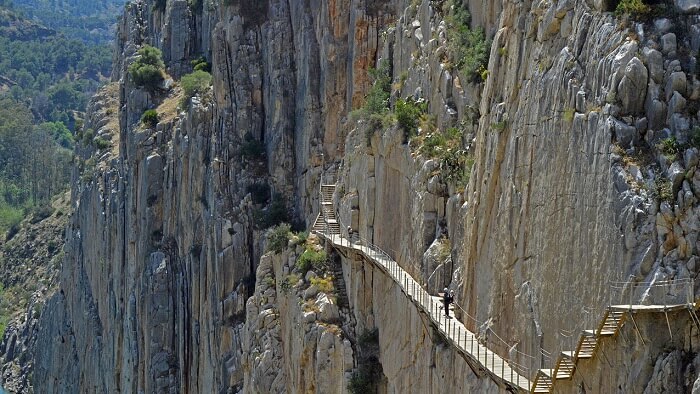 A huge Roman aqueduct 880 metres long composed of 20,000 granite blocks, very well preserved and also listed as a World Heritage Site. Also not to be missed in Segovia, the historic centre and its splendid monuments. 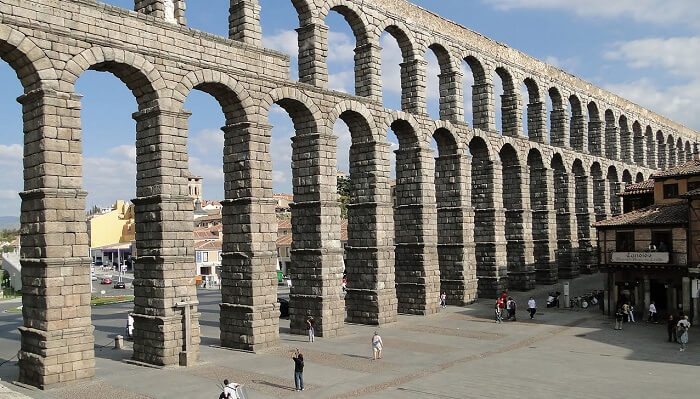 A city separated in two by a deep ravine and connected by a bridge, in a remarkable landscape. Certainly one of the most beautiful places in Spain. 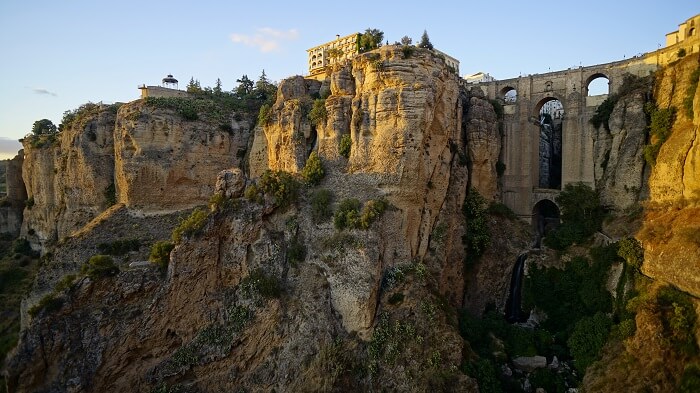 One of the very first national parks in Spain, it’s composed of three massifs, in a set of breathtaking landscapes. To see in particular: the Naranjo de Bulnes, a peak with a remarkable monolithic shape (see photo), and the ruta del Cares, a hiking trail that passes through spectacular gorges. 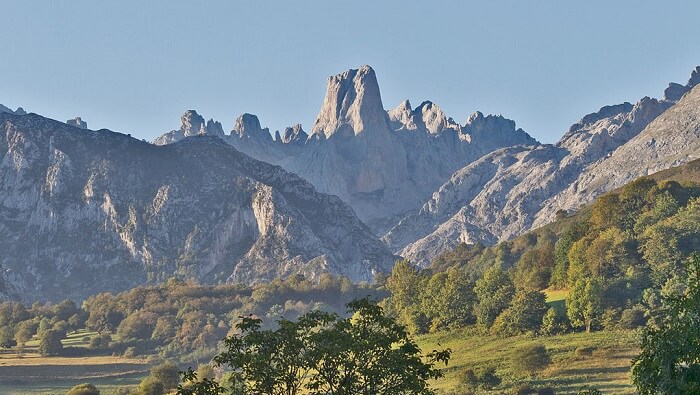 Several sites to visit in this magnificent city: in particular the Alcazar Palace and its superb gardens, the Gothic cathedral and the very beautiful Plaza de España. Sevilla is also the ideal place to see a flamenco show. 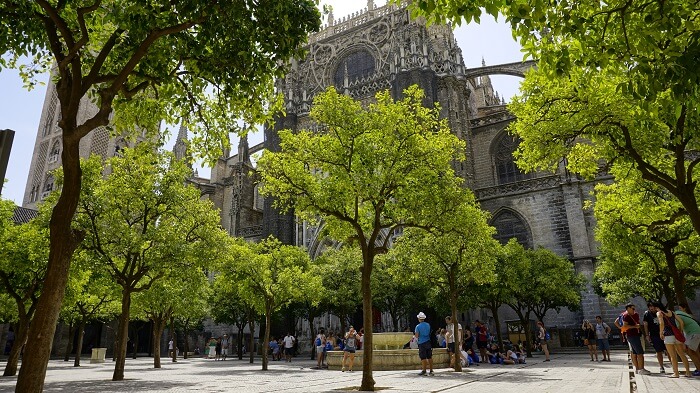 A superb natural park with beautiful beaches and few tourists, in a setting among the driest in Europe (many ‘spaghetti westerns’ have been filmed here). The small town of San Jose is a good base for exploring the park. 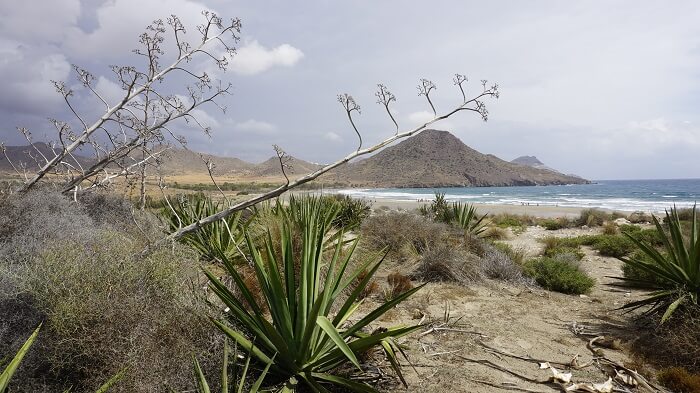 The beautiful city of Córdoba is home to the Mezquita (Cathedral Mosque), one of the most visited monuments in Spain. The site houses different architectural styles, in particular a surprising succession of arches. In addition to the Mezquita, there are many other monuments to visit in Córdoba. 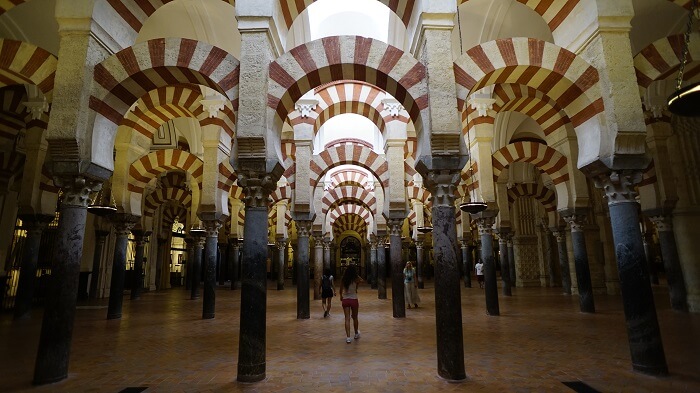 Certainly one of the most beautiful cities in Spain to visit, Valencia deserves to be placed on your travel itinerary if only to see the Plaza de la Virgen and the colossal city of arts and sciences. 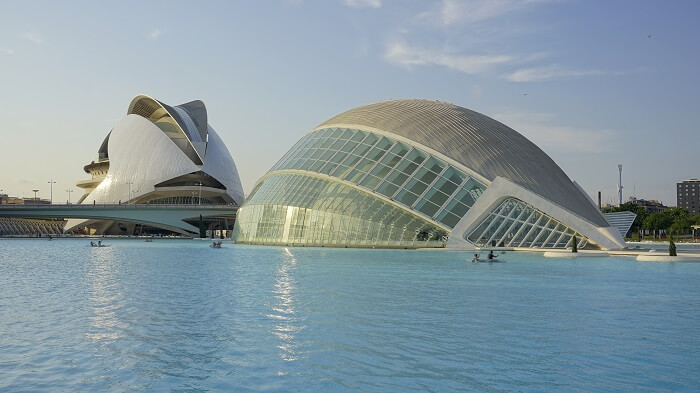 A medium-sized city renowned for its architectural diversity. Many monuments, palaces and squares are to be visited. If you have time, don’t miss the Castillo Peñafiel, off the beaten track. 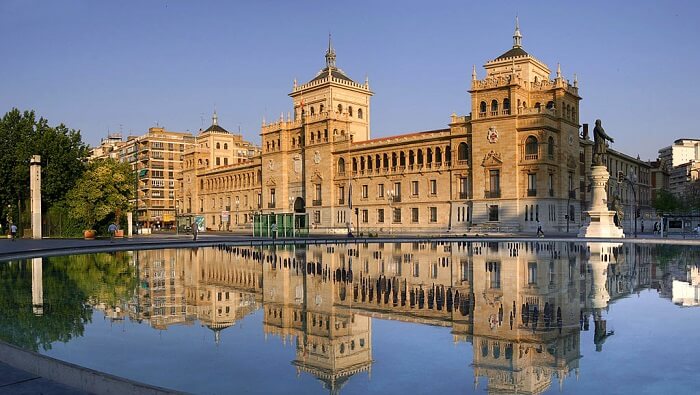 A mountainous massif located about 60 km from Barcelona, which is worth a look for its panorama and its particular geological formations. There is also a very beautiful Abbey. 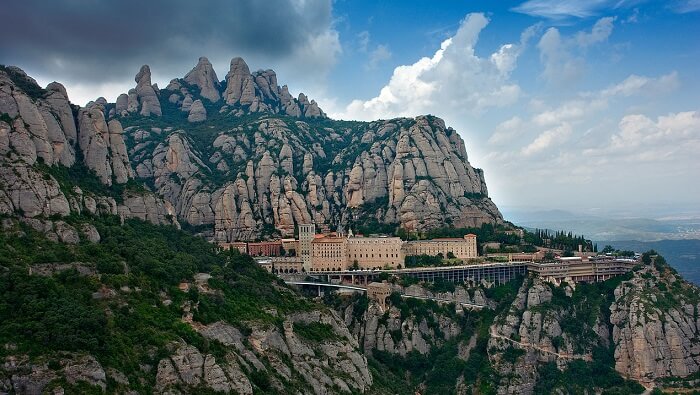 Apart from the very touristic Alhambra Palace, Granada is a very interesting city to visit. To see: the Generalife gardens, the old historical alleys and the science park. 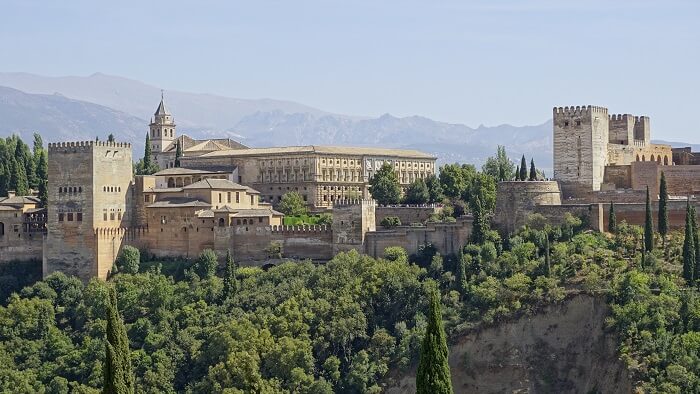 Located between Málaga and Ronda, it offers a mountainous landscape covered with pine forests dominated by the Pico Torrecilla and its 1919 meters. The ideal place for hiking enthusiasts. 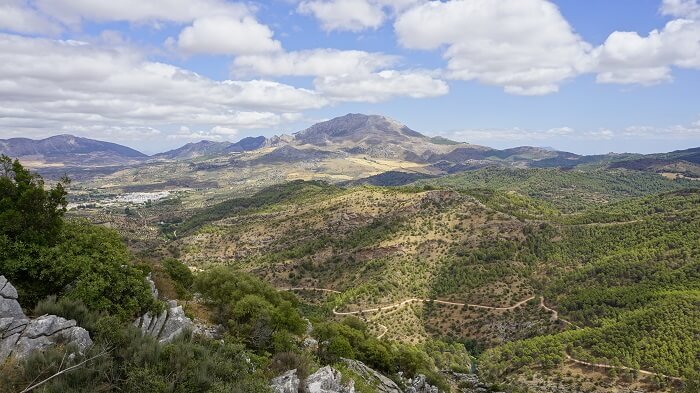 More things to do and see in Spain: